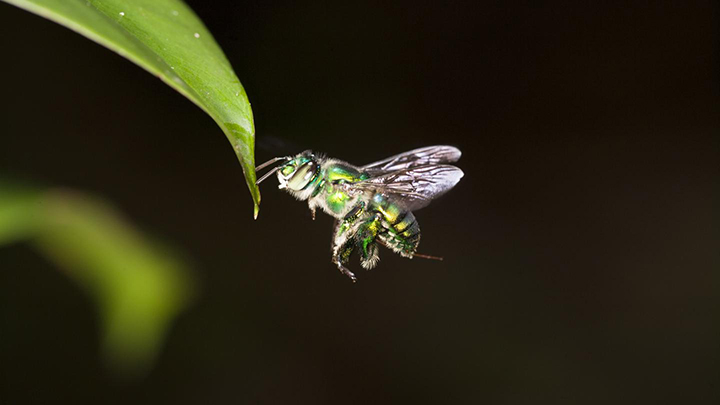 Scientists have developed a system based on insect eyes that could be used to allow drones to fly independently.

Researchers at Lund University in Sweden investigated the strategy used by green orchid bees to navigate through dense forests without colliding with obstacles.

The team presented the bees with a series of apertures of different shapes and sizes in order to mimic the conditions encountered by the creatures in their natural environment.

They found that the insects visually assessed the intensity of light penetrating through gaps in vegetation to work out whether or not a particular space is big enough for them to fly through safely without hitting the edges.

By flying towards the brightest gap, the bees are able to to quickly navigate the clearest path through complex environments.

Lund University professor of zoology, Dr Emily Baird, who led the research, said that the results could be used to allow flying robots to navigate without human guidance.

Dr Baird said: “The system is so simple and it’s highly likely that other animals also use light in this way. The system is ideal for adapting to small, light weight robots such as drones and my guess is that this will become a reality within five to ten years.”

She added: “The coolest thing is the fact that insects have developed simple strategies to cope with difficult problems for which engineers have still to come up with a solution.”

Before the system can be realised in robots, the data from this study will be used to create mathematical models that can be applied to make it possible for drones to make similar visual assessments of complicated environments.

The research was published in the journal Proceedings of the Royal Society B.