The regulator was found to meet 16 of the 18 Standards of Good Regulation, but has not met the standards relating to the timeliness of fitness to practise cases for a sixth year

The Professional Standards Authority (PSA) has completed its annual performance review of the General Optical Council (GOC) for 2019/20, concluding that the optical regulator has met 16 of the 18 Standards of Good Regulation.

Assessing the GOC’s performance against the standards between 1 October 2019 and 30 September 2020, the PSA determined that the optical regulator had met the General Standards, Guidance and Standards, and Education and Training standards. The PSA also commended the regulator’s response to the COVID-19 pandemic.

However, the GOC did not satisfy all of the requirements for meeting standard 10 relating to the maintenance of the register, or standards around the timeliness of fitness to practise cases.

This was a concern raised in the last annual review, and the PSA recognised the GOC’s commitment to addressing the issues in the fitness to practise process, including introducing a new triage process and closing older cases.

However, the authority shared: “Although the GOC is taking positive steps to improve its performance in this area, it is still taking too long to resolve fitness to practise cases and therefore has not met [the] Standard.”

The PSA also found that three separate and unrelated errors on the register meant that the GOC had not met standard 10 during the review period. The report suggests these errors appeared to be a combination of systemic flaws - such as limitations in the customer relationship management (CRM) system, and individual errors.

The authority noted that, in each case, the GOC took appropriate action to correct the register and adapt its processes. 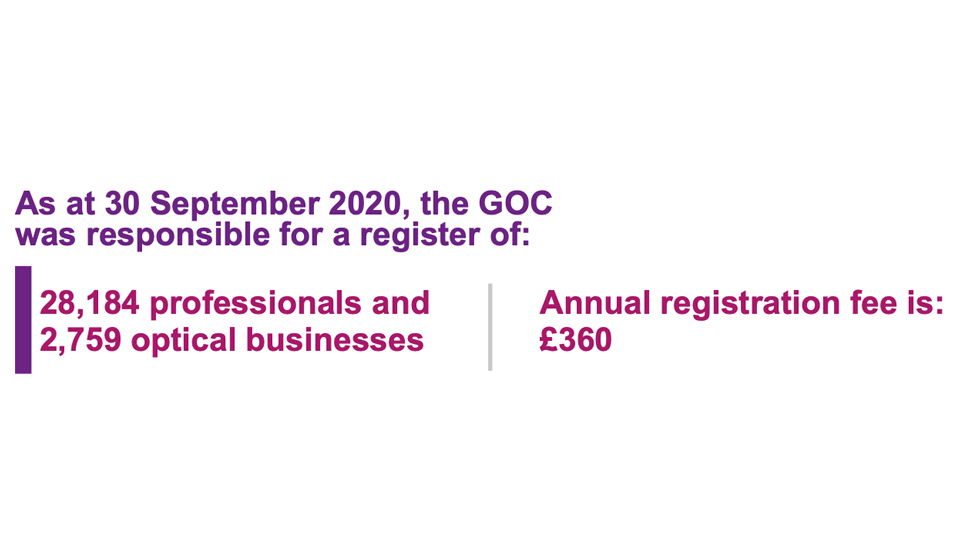 Professional Standards Authority
Key stats from the PSA’s review of the GOC
Considering the regulator’s response to the pandemic, the PSA suggested the GOC had showed “agility” in responding to the challenges, including issuing guidance for registrants and businesses on variety of topics, as well as adapting its core activities and making use of technology. The PSA also suggested the regulator consulted ‘quickly and constructively’ with stakeholders to make changes and consider the longer-term.

The GOC welcomed the outcome of the review, with Lesley Longstone, GOC chief executive and registrar, commenting that the regulator was pleased to have met the majority of the standards, “particularly in light of the challenges we have all faced during COVID-19.”

The regulator acknowledged there was “still work to be done” to improve in key areas highlighted by the PSA, such as in the fitness to practise process.

Longstone commented: “We are aware that there is still work to be done to improve the timeliness of our fitness to practise cases and have been working to implement our improvement plan, in line with our ‘Fit for the Future’ Strategic Plan for 2020-25.

“A new triage process has been introduced to ensure that we are only investigating cases where there is a genuine fitness to practise concern, which has helped to reduce the number of cases entering the system unnecessarily,” she added.

Responding to the issues highlighted in the register, Longstone shared: “Although the errors noted were resolved in good time, we will be taking on board the feedback that we have received from the PSA.”

The GOC also welcomed the comments regarding work undertaken during the pandemic. Calling it “heartening,” Longstone said: “We moved as quickly as we could to release a number of statements to help support our registrants throughout the pandemic and clarify certain areas of practice to protect public safety, as well as outlining the amendments to our regulatory functions.”

Commenting on the outcome of the review, legal and regulatory director at the AOP, Ella Franci, said: “Although we note the improvements the GOC is making, the fact remains that they lag behind other regulators in their handling of fitness to practice proceedings. Our members are at the heart of the AOP, and we know from experience the stress, upset and anxiety that GOC fitness to practise investigations bring; we therefore remain extremely concerned about the age of the some of the GOC’s cases and delays to case progression which are far too common.

“It is disappointing to see that after six years the GOC is still failing to meet the PSA’s standards on timeliness and is the poorest performing healthcare regulator in this area,” she added.

Franci continued: “That said, the AOP has welcomed the Acceptance Criteria as a triage tool and we are confident that its implementation has taken some matters out of the GOC system in a timely fashion. The AOP continues to provide constructive feedback on how the GOC could improve its timeliness.”

The full performance review of the GOC for 2019/20 can be found on the PSA website.