Access to cataract surgery is being rationed by NHS commissioners, according to an investigation carried out by the British Medical Journal (BMJ).

The BMJ has reported that patients with cataracts are being screened and those who do not meet visual acuity thresholds are being denied surgery.

Almost 2900 prior approval requests or individual funding requests for cataract surgery were rejected in 2018–2019 among the 185 Clinical Commissioning Groups (CCGs) that provided data, which is more than double the number two years ago.

The investigation also found that there is a widespread local variation in how referrals for cataract surgery were processed, with some CCGs requiring no prior approval or individual funding requests to refer patients while others process and reject referrals in this way.

The BMJ highlighted that National Institute for Health and Care Excellence (NICE) guidelines state that cataract removal is cost effective and should not be restricted to the more severe cases.

Cataract surgery is the most common operation in the NHS, with more than 400,000 procedures performed every year in the UK.

President of the Royal College of Ophthalmologists, Mike Burdon, said that he will make it his mission to convince CCGs to stop rationing cataract surgery before he steps down in a year’s time.

He explained that it is a false economy for CCGs to apply criteria for cataract surgery as a way to control costs, adding that the procedure should not be labelled as having “limited clinical value” and that the approach was “unjustified whatever way you looked at it.” 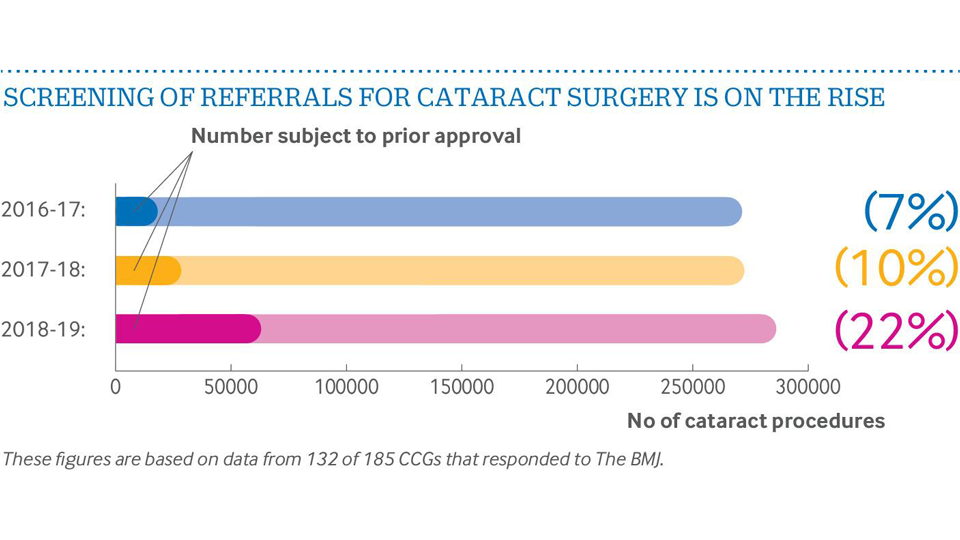 The BMJ has found that the screening of referral for cataract surgery is on the rise
Mr Burdon said that the BMJ’s findings showed that commissioners were ignoring NICE guidelines.

He explained: “Health economists spent 18 months reviewing the evidence for cataract surgery on both first eye and second eye, and they convincingly concluded that there was no justification to ration cataract surgery on the basis of acuity. This was independent of ophthalmologists, including myself.”

“What is the point of NICE doing detailed evaluation if CCGs are just going to knowingly ignore that advice? The health service budget is limited, but you should make those spending decisions on the basis of the clinical evidence. Cataract surgery comes out as probably the most cost-effective thing in the NHS,” Mr Burdon highlighted.

However, co-chair of NHS Clinical Commissioners, Graham Jackson, said that ensuring patients get the best possible care against a backdrop of increasing financial pressures and demand for services is one of the biggest issues that CCGs face.

Mr Jackson said: “Cataract surgery specifically is an area that is often subject to prior approval. Such clinical decisions are critical in deciding when a patient has reached the stage that an operation will be the best option. Performing surgery is not without risk; a clinical threshold is a good way of defining which patients would best be served by, in this case, cataract removal.”

Clinical director of the AOP, Dr Peter Hampson, said that the BMJ’s findings were “alarming” and agreed that the rationing of cataract surgery has proven to be a false economy.

“Cataract rationing not only has the potential to impact on the quality of life of patients but can potentially cost the NHS more in the long run. The increased risk of falls and the loss of independence are serious concerns and show why we should not consider visual acuity in isolation,” he explained.