The NHS Atlas of Variation shows performance differences across England, including access to diabetic health screening and cataract operations 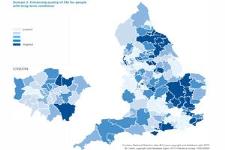 A new report from Public Health England (PHE) has highlighted stark levels of variation in the performance of NHS services across the country.

Published today (18 September), the third NHS Atlas of Variation maps the inequity in the performance of the NHS by area, and states that the individual practices of clinicians and healthcare organisations represents “unwarranted variation” in the delivery of services across England.

Chief among the findings are variations in late cancer diagnosis, delayed admission to stroke units and the over-prescription of antibiotics. Highlighting the under-use of some services, it cites that almost one-third of diabetes patients “do not appear to have received the basic standard of care.”

Under current guidelines from the National Institute for Health and Care Excellence (NICE), diabetic patients should receive eight annual health care checks to manage the condition and its complications, including an eye examination. Yet figures show that in some areas, patients are receiving only four of the eight checks.

The report also reflects the changing commissioning priorities for eye health services, showing access to cataract operations slipping in the effort to manage shrinking budgets. It highlights that a 6% decrease in the overall admission rates for cataract operations in England from 2010/11 to 2012/13 “may reflect priorities for commissioning and the ways in which services are commissioned.”

The findings come in the wake of plans announced earlier this month of one CCG to outsource the delivery of a number of services, including cataract operations, to French hospitals. While other CCGs have opted to restrict cataract surgery to just one eye per person in an effort to stretch their commissioning budgets further.

Speaking to The Guardian, national medical director for NHS England, Sir Bruce Keogh, said: “This atlas exposes some inconvenient truths about the extent of clinical practice variation in care for some common conditions.”

Commenting on the findings, Katrina Venerus, managing director of the Local Optical Committee Support Unit (LOCSU) told OT: “Meeting the health needs of the whole population is a huge challenge for the NHS. Nonetheless, it is concerning that the new NHS Atlas of Variation continues to show a significant variation in cataract surgery rates across England.

“Differences in demography of local populations, such as ethnicity, deprivation and levels of local need, may explain some of the variation. However, there is a worry that some areas have been restricting access to cataract surgery.”

Ms Venerus added: “At LOCSU, we know from the information we have on eye services commissioned in primary care by CCGs that some have made eye health commissioning a priority but sadly many have not and this may be reflected in these latest cataract figures.”