Regulator round up: insights from the latest GOC meeting 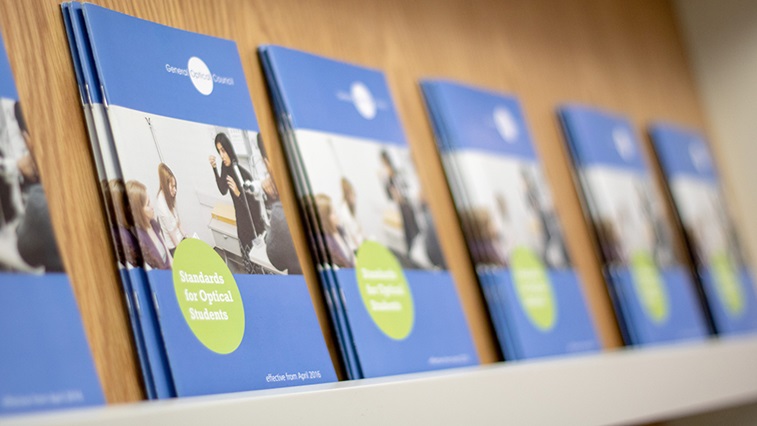 The General Optical Council (GOC) held a remote meeting on 11 November to discuss a range of topics, from progress on the Education Strategic Review to work on an anti-racism strategy, and the Department for Health and Social Care’s plans for regulatory reform.

OT presents a selection of points covered during the meeting.

Chair of the General Optical Council, Gareth Hadley, became an Officer of the Order of the British Empire in the 2020 Queen’s Birthday Honours in recognition of his contribution to the optical sector.

“You’ve done a fantastic job in leading us,” she said.

The GOC is reaching the final stages of appointing a new chair, with interviews completed and the optical regulator to file a notice to appoint with the Professional Standards Authority.

The GOC meeting heard that the Department for Health and Social Care plans to consult on detailed proposals for regulatory reform.

Rather than legislating for all regulators at once, the DHSC plans to take a regulator-by-regulator approach.

“This is disappointing for us but does offer some compensation in that it may be easier for us to consider issues that are bespoke to the GOC,” a report prepared by Ms Longstone noted.

Speaking at the meeting, Ms Longstone highlighted that while regulatory reform has been “a bit of a moveable feast,” the consistent message is that the DHSC is looking to harmonise policy, procedure and legislation across regulators.

The programme of reform could potentially give individual regulators more autonomy and the ability to make certain decisions without having to go to the Privy Council.

“There is still quite a bit of uncertainty. Where we are utterly dependent on legislative reform in order to take forward our own strategic programme of work we are going to go ahead and construct our draft rules to take them to the Privy Council,” Ms Longstone said.

The GOC has appointed a new equality, diversity and inclusion partner, Yani King, who is beginning work on the optical regulator’s anti-racism statement.

A workshop on inclusive leadership and management has been delivered to GOC managers and staff.

Speaking at the meeting, GOC chair, Gareth Hadley, shared that he was first involved in dealing with issues of racism and inequality following the Brixton riots in the 1980s.

“Throughout my working life there have been occasions where diversity issues have been brought into high relief,” he said.

“Constantly folks say something has to be done about this and then it all disappears into the ether once the immediate challenge has been moved away from…I hope that eventually as a society are going to get a grip on these issues and become more inclusive,” Mr Hadley emphasised.

Papers presented to the November GOC meeting highlighted that the GOC has received a surge in registration enquiries from practitioners currently based in Hong Kong.

The development occurred after the UK Government offered up to three million Hong Kong residents the chance to settle in the UK following the introduction of a new security law in Hong Kong.

“So far we have received 45 enquiries about registration, though only one of these has translated into an application,” Ms Longstone noted in her report to the meeting.

These include making peer review mandatory for dispensing opticians, introducing fractional points and enabling optical professionals to complete non-approved CPD from outside the healthcare sector.

The introduction of fractional points would mean that optical professional could complete half an hour of CPD for half a point – rather than the current minimum requirement of one hour.

Ms Michaux emphasised that valuable learning can be obtained by optical professionals from outside healthcare – for example, in business and leadership.

Decision on ESR delayed until February

Although the regulator had initially intended to reach a decision on the Education Strategic Review by December, this was delayed until February 2021 at the November GOC meeting.

GOC chief executive, Lesley Longstone, highlighted that it is important to get an early decision on the outcomes for registration to give providers enough time to develop courses.

“It feels like we have to make some decisions in order to be able to start moving forward on the implementation side,” she said.

Ms Longstone emphasised that current GOC requirements are not adequate for the post-pandemic world.

I see avoidable blindness every day now. It really is a very stressful environment to be in – and that is coming from someone who has been working for 30 years

The regulator needs to start drawing some “lines in the sand” in order for progress to be made, she added.

“The impact of COVID-19 is to accelerate our progress to the world that we envisaged. The need to make more change is more urgent but the impact of the pandemic on universities means that they are just on their knees,” she said.

Ms Longstone highlighted that the GOC understands that universities are operating in a “fiercely competitive” marketplace.

“We don’t want to take any decision that will put at risk the flow of registrants,” she said.

“The ESR is like completing a jigsaw – we need all the pieces so we don’t find out later that we are missing some,” he observed.

Dr Parkins added that one of the effects of COVID-19 has been to fast-forward levels of clinical care within optometry.

“I see avoidable blindness every day now. It really is a very stressful environment to be in – and that is coming from someone who has been working for 30 years,” Dr Mackie said.