“It feels absolutely amazing to win”

Final year optometry student at the University of Manchester, Emily Mather, who was named the AOP Awards 2020 Student of the Year, reveals how her little sister’s condition inspired her career 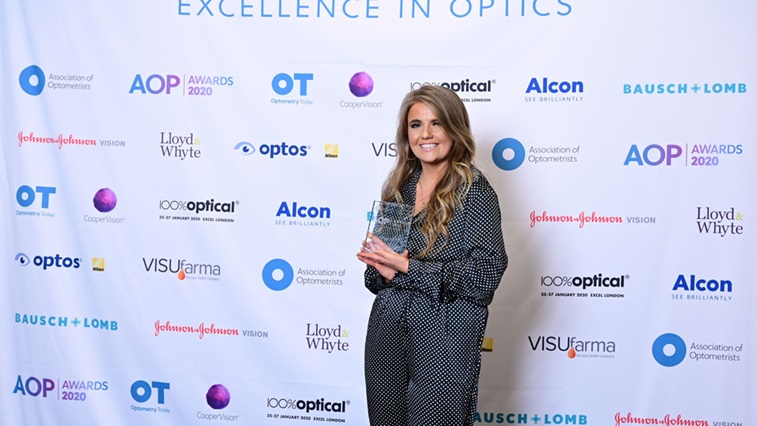 University of Manchester student, Emily Mather, is celebrating her AOP Awards 2020 Student of the Year win whilst looking forward to starting her pre-reg year at Moorfields Eye Hospital in London. She tells OT  how her little sister inspired her decision to study optometry, and why helping people is the best part of her day.

How does it feel to the AOP Awards 2020 Student of the Year accolade?

It feels absolutely amazing to win and proves that hard work pays off.

What does winning the AOP award mean to you?

Winning the AOP award means I can say a unique thank you to absolutely everyone at the University of Manchester for being so fantastic. It is amazing to be recognised for a lot of hard work so early into my career. The award will certainly motivate me to keep striving to achieve the best.

Why did you decide to study optometry?

My little sister suffers from recurrent uveitis, and she is my closest friend. It took a lot of tests to figure out the problem initially and it really bothered me there was something wrong.

I was studying science A-levels at the time and began reading around the subject of optometry and eye disease. I always thought I wanted to be a teacher, but when I began reading that optometry could combine my love for science and helping people, I decided that it was the job for me.

What is the most rewarding part of your degree and why?

The most rewarding part of the degree is seeing how grateful the patients can be when you help them, whether this be improving their glasses so they can go back to doing things they’ve been struggling with or telling them about a low vision app that could really benefit them. It is so lovely knowing you’re helping someone.

Any particular standout moments so far?

In the third year of the degree, we have an open clinic for members of the public. My absolute favourite part of the week is when I’m almost finished, and my patients always make a point of giving me and my supervisor feedback about how they’ve been made to feel. One gentleman told me it was lovely to have someone who was so attentive – he called me “an absolute superstar,” and said I’d made his day by being so friendly. This really stuck with me, as it was so nice to make a little difference to someone’s day.

What’s your biggest achievement of the past year?

Winning the AOP award is obviously amazing. At university I was also awarded Divisional Student of the Year within pharmacy and optometry, which was again so surprising and amazing. I have also been offered a pre-reg position at Moorfields, which I am so excited about.

What are your ambitions for after your degree?

My plans after my degree are to go into the pre-reg year with lots of enthusiasm and passion to learn. I am so excited for the pre-reg year and what it will bring. After this, I’d absolutely love to volunteer in an outreach programme, and maybe even one day return to university in some way or another.