An independent optometry practice in Edinburgh has shown its support for a local junior sports team by sponsoring its new uniforms.

Dunedin Netball’s junior team has been kitted out with new training shirts, bearing the logo of KD Wallace Eyecare.

Explaining the decision to sponsor the netball club, optometrist and practice owner, Kevin Wallace, told OT: “It has been a difficult year for many families and when I heard the team were getting new uniforms and training gear, I offered to pay for part of it. Our practice has had excellent government support throughout the pandemic and are fortunate to be in a position able to help out.” 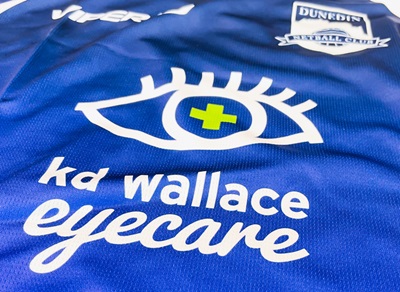 KD Wallace Eyecare on Dunedin Netball’s junior team t-shirts
“I also have an interest in uniform design and the team allowed me some input into the process and how our logo was displayed,” Wallace added.

The sponsorship has supported the creation of a new custom Viper 10 t-shirt for more than 70 members of the club’s junior section.

“We are very proud to have our logo on the team uniform – Dunedin Netball is an excellent organisation and we are very happy to be linked with them in this way,” Wallace commented. “I also hope that the girls enjoy wearing their professional-looking uniforms and it encourages their involvement and performance in the game.”

The netball club is based in the west of Edinburgh, with over 140 members and 11 competitive teams across junior and senior sections.

“It has been amazing for the juniors to get this extra welcome boost as they return to netball full-time with a fabulous new training top. The girls look so professional and it makes them feel part of a team at training, as well as giving them a real sense of pride being part of their club,” Prescott shared.

“We are so thankful for KD Wallace Eyecare for supporting Dunedin to increase participation in netball and engage more young females in sport across Edinburgh,” she continued.