The store of the future

Boots UK launched a new look at its first branch in Covent Garden in June and has since rolled out the concept to a second store in Sheffield. Both branches feature an in-store Boots Opticians.

“Within our new innovation stores there are lots of exciting things going on and lots of new concepts being trialled. In terms of our opticians, the store layout, how we engage with customers and the frame ranges that we offer have all been reviewed as part of this new concept,” Madeline Shaw, marketing director of Boots Opticians, shared when speaking to OT.

Having launched in London’s Covent Garden on 27 June, the flagship 28,524 square foot store marked the beginning of a reinvention journey for Boots as it uses customer and colleague feedback to shape its future.

The ‘Store of the future’ concept was conceived in October 2018 and had a nine-month development period before being revealed in Covent Garden. Within the store is a new concept Boots Opticians. Furniture, frames, technology and layout have all been reviewed through a process in which customer and staff feedback are pivotal.

“As a company, reviewing the customer journey is one of our primary focuses. We have an on-going programme to do this in order to find out where the pain points are for our customers and where we could be doing better for them,” Ms Shaw explained.

During the conception of the new look, Boots utilised feedback to make adjustments to the look and feel of its in-store opticians both on the shop floor and in the testing room.

“We get excellent scores in the clinical healthcare part of the customer journey for our opticians, and although we would never stop progressing and improving it, the area that customers told us they were feeling the pain points was in the front of house,” Ms Shaw shared. 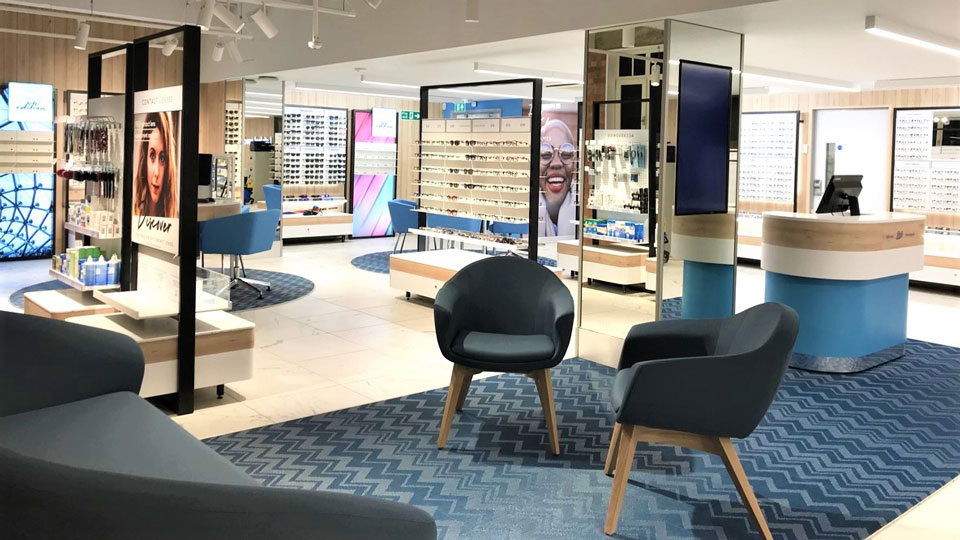 Focusing on this, Boots asked itself how easy and enjoyable is it to shop in its opticians?

The business decided that it needed to make its frames easier and more enjoyable to shop, which has resulted in a revised layout and a warmer ambience with softer lighting and furnishings.

“We have remerchandised and created a way to display our frames that really brings the styles to life,” Ms Shaw said.

The business has also secured a frame collection from eyewear designer Tom Davies that it will stock exclusively. Labelling it “the jewel in our crown,” Ms Shaw confirmed that Boots has ambitions to refresh its frame collections more regularly and offer “style at every price point.”

In addition to visual changes, staff at the opticians have received training for a new enhanced role as a frame stylist, which was offered in conjunction with the London School of Styling.

We are not in a place as a business where we think that is it, we have 100% delivered our ambition and we will roll it out everywhere. What we are doing is much more of an agile test and learn process

Boots has also taken steps to ensure that traditionally invisible products such as contact lenses and hearing have been made more visible.

Customer awareness of contact lenses and hearing aids were found to be really important services for customers, but awareness of them was low, Ms Shaw explained. “We have worked on a concept to enable customers to be more informed and educated even before they have a conversation with our professionals,” she explained, admitting: “We wouldn't say it is 100% yet, but we are happy with the first steps that we have made.”

“We have had feedback from the store to say that it has already prompted more conversations,” she added.

What changes have been made in the testing room and why?

Clare Slade, director of professional services at Boots Opticians: In Covent Garden we have invested in optical coherence tomography (OCT) because we want our optometrists to be offering the very best in cutting-edge High Street technology, which can strengthen their diagnostic accuracy and safety.
We have also developed a new look and feel in the consulting rooms. We have gone back to a less-is-more approach. It’s minimal, while making sure that there is still everything in the room that the optometrist needs to do their job. Everything has a place and is in its place so the room is clear and clutter free and it is giving the right impression to our patients.

Ms Shaw emphasised that the ‘Store of the future’ concept and its associated changes are the start rather than the end of the journey for Boots.

“We are not in a place as a business where we think ‘that is it, we have 100% delivered our ambition and we will roll it out everywhere.’ What we are doing is much more of an agile test and learn process. We will continue to tweak parts of the store and move on to continually improve it,” she told OT.

Collecting feedback and working agilely to adapt the optical offering further is a continual process that officially begins with feedback from staff four weeks after opening the doors to the new store.

“When you do something in concept, it looks great on paper on a blue print, but the real test of how it works is when colleagues and customers interact with it day to day.

Overall, feedback has been positive with colleagues calling the customer journey from waiting area to pre-screening and back onto the shop floor “seamless.”

Now that we have rolled out the concept in two large stores with Boots Opticians, we want to pause in order to learn from the changes and adapt if necessary

When asked if the new concept will be rolled out into standalone Boots Opticians branches across the UK, Ms Shaw confirmed that there were no immediate plans to do so.

“Now that we have rolled out the concept in two large stores with Boots Opticians, we want to pause in order to learn from the changes and adapt if necessary,” Ms Shaw shared.

Ms Shaw confirmed that if through the process the business identifies “small things” that have been really well received by colleagues and customers, it would ensure they were forward and reflected in any new stores openings or refits.

This could include the softer lighting that has been introduced or the new point of sale material that can be easily transferred, Ms Shaw said.

What does the new concept mean for Boots Opticians?

Claire Slade: When we open new or refit existing stores, it is about making sure that our staff have access to the very best technology and are able to offer the best service to our patients through enhanced services.

We really want to make sure that when someone has an eye care need, they are confident that they can come to Boots and have that need taken care of. We already over index in terms of the professionalism and clinical service that we provide; we wish to maintain that position in our industry and we can only do that by embracing the technology that is out there. At the moment it is about OCT and enhanced services and making sure all of our practitioners have access to those things.