Fundraiser to stop off at opticians during 190 mile charity ride 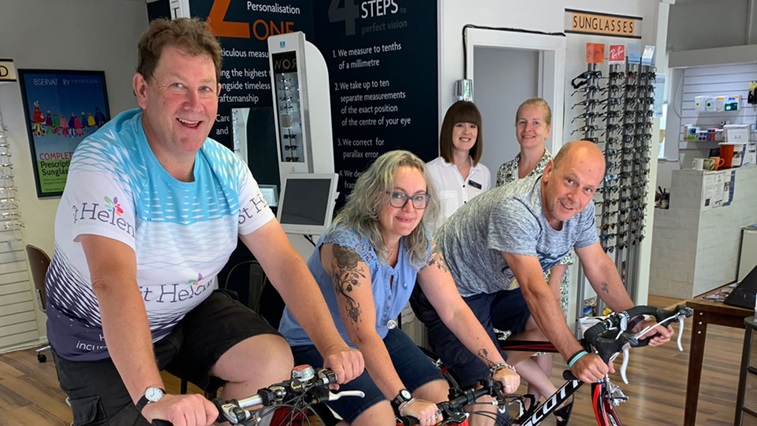 A fundraiser is taking on a 190-mile bike ride with a stop off at Observatory the Opticians in Haverhill to raise money for the charity St Helena.

Tim Nash began the five day cycle from Hillsborough to Castle Hedingham on Saturday (13 July) in memory of Keira Dixon, who passed away in November 2018.

In 2014, a tumour was discovered on the then 16-year-old’s brain following a routine eye exam at Wardale Williams the Opticians in Halstead – the sister practice to Observatory the Opticians.

Mr Nash and Ms Dixon worked together behind the bar of the Bell Inn in Castle Hedingham during a summer beer festival. When Mr Nash found out that Ms Dixon was a Sheffield Wednesday fan, he decided to purchase a bottle of the football club’s official beer to give to her. Sadly, Ms Dixon never got to try the beer.

On Saturday, Mr Nash picked up a bottle of the beer from Hillsborough and will cycle to the Bell Inn in time for the start of the beer festival on 17 July.

Mr Nash will stop off at Observatory the Opticians, who, with Wardale Williams, launched the Keira Campaign in 2015 to raise awareness of the importance of eye exams.

The Haverhill-based practice has set up bikes and turbo trainers to attempt to match Mr Nash’s 190-miles during July.

Mr Nash has achieved his original fundraising goal of £3000 and is now hoping to raise £5000 for St Helena, who provided support to Ms Dixon and her family. To donate, visit Mr Nash’s JustGiving page.

Pictured is Mr Nash with Ms Dixon’s parents, Mandi and Tim, with Lucy Dye and Rachel Ramm from Observatory the Opticians in Haverhill