Optoms hit the high street to raise awareness of EOS

Optometrists from Specsavers’ Daventry store have taken to their local High Street in a bid to raise awareness of enhanced optical services (EOS) amongst the local community that it is based.

Optometrist, Amit Naik, and pre-registration optometrist, Bhargavi Zinzuwadia, alongside front of house staff at the practice, shared leaflets with the public at a pod set up close to the store.

The initiative aimed to both raise awareness of eye health and the EOS that are offered by the practice. It coincided with National Eye Health Week this week (24–30 September).

Mr Naik said that the public had responded positively to the team. “Once they realised we weren’t trying to sell them anything, they were very interested in the additional services we had to offer,” he said, highlighting that even some regular patients of the practice were not aware of the full services available.

“They found it useful to know we could be their first port of call for any eye-related problems, and it was good to show them that there’s another side to us optometrists, not just prescribing spectacles and contact lenses,” Mr Naik added. 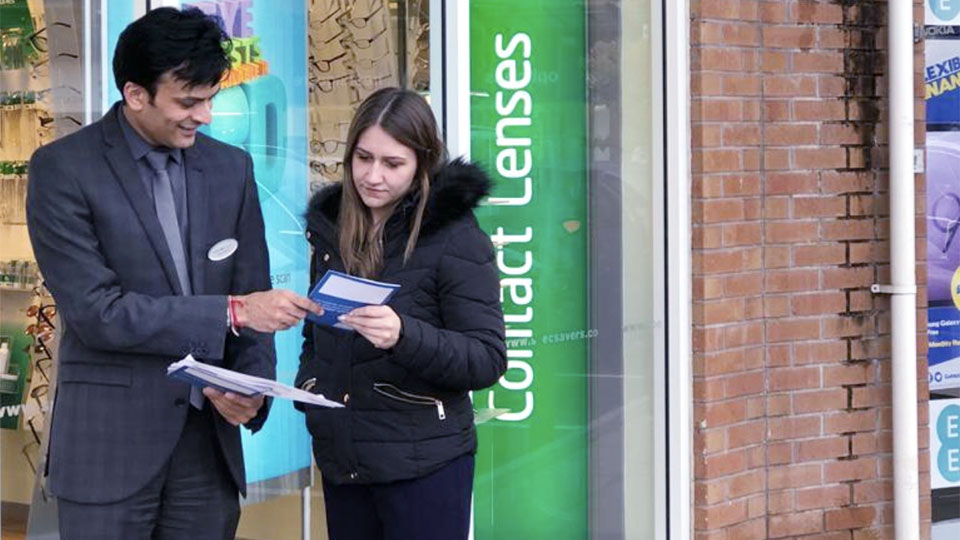 EOS is currently only available at Daventry on a private basis, due to NHS funding.

Speaking about the initiative, optometrist and store director at Daventry Specsavers, Satvinder Soomal, said: “I’m trying to promote our optometrists and be proud of what they’re able to do – they’re able to save sight, not just test eyes.”

“I also want people to know they can come into store and be seen by a familiar face,” Mr Soomal said, adding: “In the old days you could go to the GP and it was always the same person. I want to give customers that same feeling of recognition and trust.”

The initiative was covered by the local newspaper, the Daventry Express, helping it reach the wider local community.