One in five people who visited Vision Express’ Vision Van at a festival in Hampshire last weekend (24–26 August) had not had their eyes tested for over a decade, the multiple reported.

Vision Express’ mobile testing facility was based at CarFest South, a three-day festival hosted for Children in Need, and staff were on hand to speak to festivalgoers about the dangers of not having regular eye tests.

Providing free eye tests during the festival, Vision Express revealed that 90% of the people it saw were overdue an eye test and 14% had not had an eye examination since passing their driving test.

Since 2015, Vision Express has been working to raise awareness of the dangers of driving without roadworthy vision as part of its #EyeTestsSaveLives campaign. A DVLA survey released earlier this month revealed that only 50% of drivers are aware of what constitutes roadworthy vision, demonstrating the need for greater awareness of regular visits to an opticians, the multiple highlighted.

Of the spectacles wearers who visited the van during the event, 84% required a new prescription.

During the festival, people were offered free eye tests, contact lens trials and the chance to take a virtual ride in a Formula One car, with the help of virtual reality headsets. 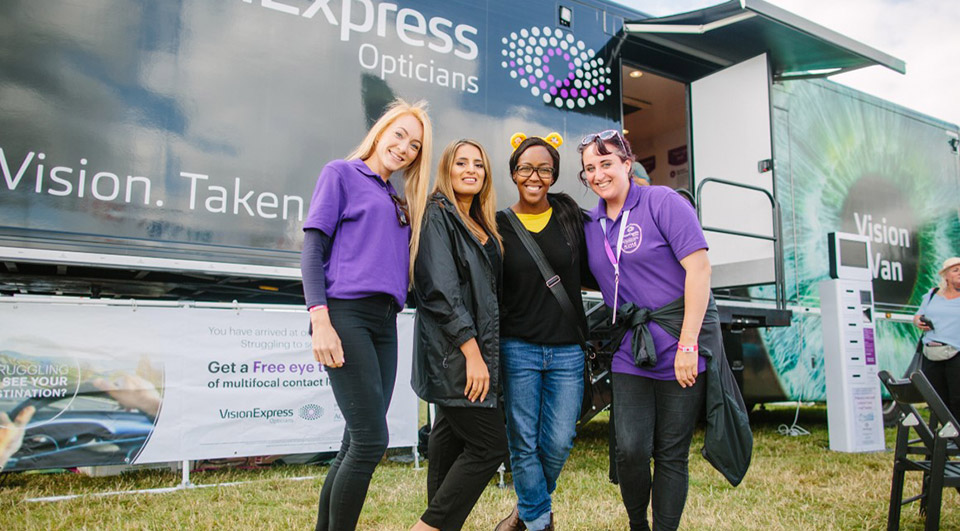 Television presenter Angellica Bell and Status Quo band members, Richie Malone and John Edwards, were amongst those who had an eye test at the van.

38-year-old Martin Daniel Smith, who also visited the van for an eye test at the event, last had an eye test 18 years ago. Mr Smith said: “I just assumed I didn’t have a problem, but I started to realise that my eyes aren’t as healthy as they used to be.”

Commenting on the event, CEO of Vision Express, Jonathan Lawson, said: “It was great to see so much enthusiasm for our Vision Van and to have our celebrity guests and festivalgoers join us to learn about the importance of good eye health practices, which includes an eye exam every two years.

“Our Eye Tests Save Lives campaign is committed to reducing the number of vision-related accidents on our roads. The statistics from CarFest South show that a lot still needs to be done to educate the general public about the potential dangers they could be posing not just to themselves but to others.”