Ørgreen launched seven new eyewear styles – three for men and four for women – to its Acetate collection at Silmo (27–30 September).

Each of the models is available in six colour options, such as clear smoke or green marble, with a colour transition between the two-toned sides and tips.

Styles include ‘Ligia’ (pictured above) which is named after the company’s communications director. It has a square geometric shape and has a compact design.

Zoobug London, which is distributed by Mondottica, launched its spring/summer 2020 collection of sunglasses.

Models include ‘Lily,’ which is oval-shaped with a decorative indent on either side of the upper edge of the frame. It is available in purple crystal or crystal purple flowers colour options. 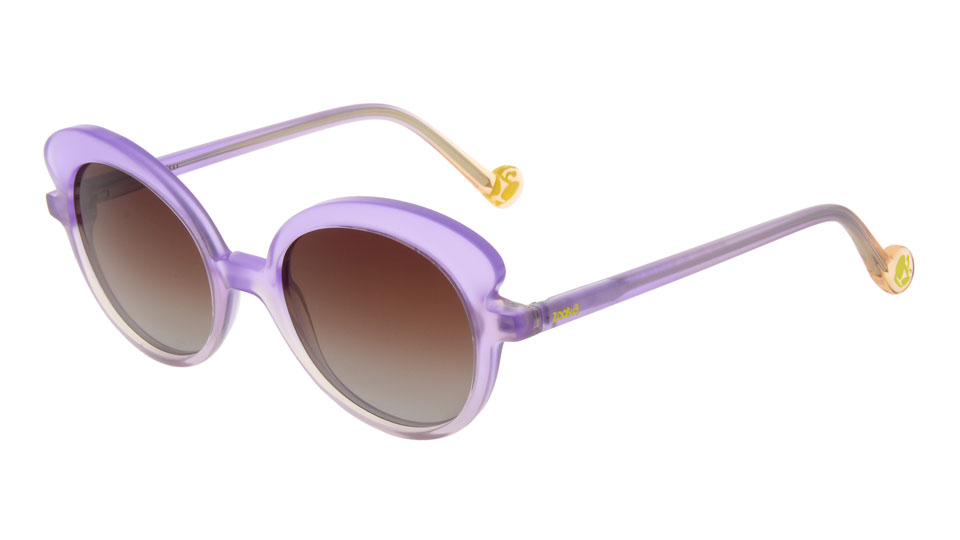 ‘Lily’ by Zoobug
Linda Farrow launched its spring/summer 2020 eyewear collection in celebration of its 50th anniversary.

Speaking to OT, founder and creative director of the eyewear company, Simon Jablon, said: “The designer, and my mother, Linda Farrow started the first-ever collections in 1970. I relaunched the brand in 2003. Part of the celebrations will be to delve into our heritage and DNA, bringing that ‘70s spirit back in a contemporary and modern way.”

The high-fashion range is inspired by ‘70s style icons, with a focus on oversized frames that are made from acetate, Japanese titanium and gold.

Part of the celebrations will be to delve into our heritage and DNA, bringing that 70s spirit back in a contemporary and modern way

Co-founder of the eyewear company, Marco Barp, said: “Every Tree Spectacles collection is the result of careful research and development. To achieve designs of excellence we have worked tirelessly to combine a special mix of materials, advanced technologies and the best artisan craftsmanship available to us in Belluno, the heart of the Italian eyewear region.”

The four models from the Acetate Bold range are: ‘Febo,’ ‘Hero,’ ‘Creo’ (pictured below) and ‘Zeno.’ 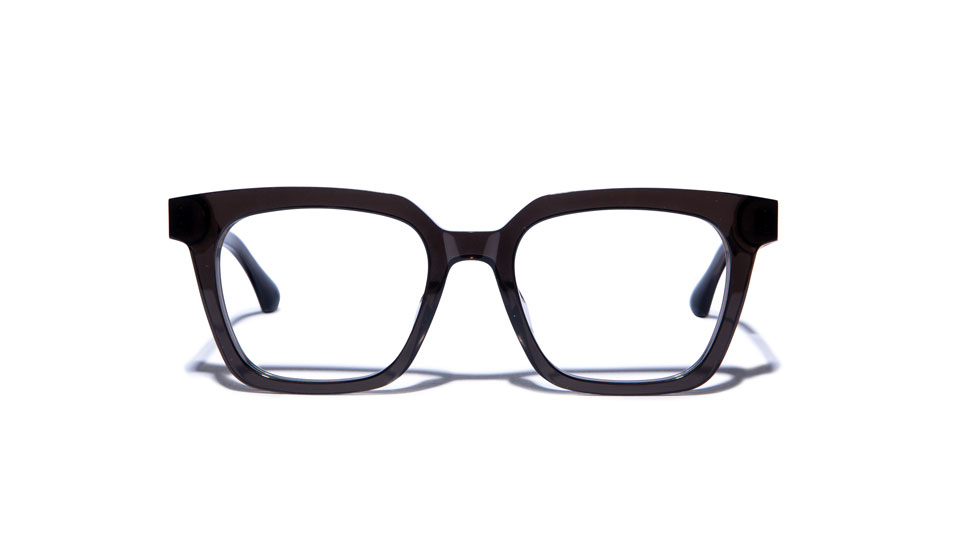 ‘Creo’ by Tree Spectacles
Tom Davies launched the Precious collection, which is made up of 60 frames and has been 10 years in the making.

Speaking about the range, the eyewear designer told OT: “I’ve been doing silver 925 for two years in sunglasses and buffalo horn for 10 years, and I have merged it together into one complete collection for the first time. Precious is a 60-piece range and everything about it is luxury because of the materials I am using.”

Mr Davies highlighted a solid gold frame from the Precious collection: “Imagine King Midas touched this frame and turned the tips, nose pads, the whole thing to solid 18 carat gold. It feels expensive, it looks expensive and it is expensive. Once I’d done that, I used the same technique and built it through the range.” 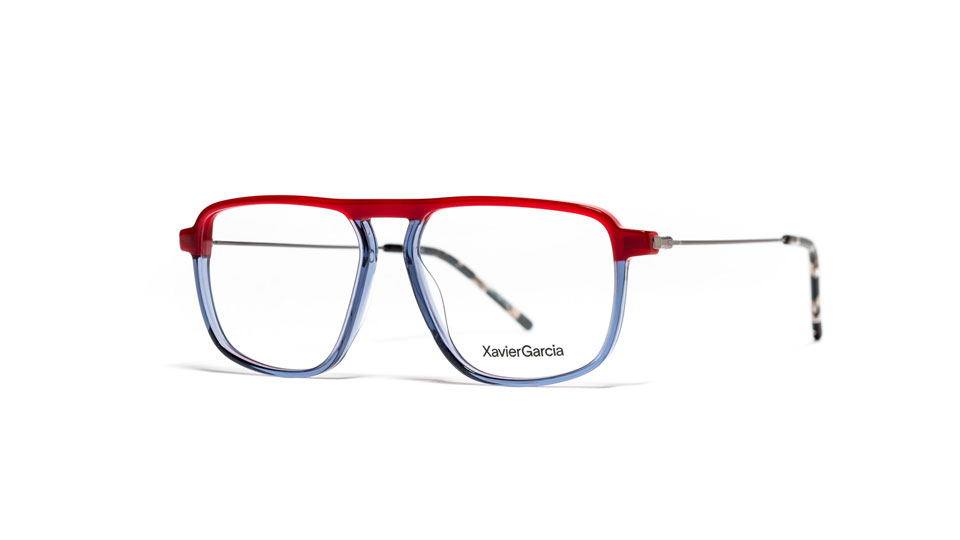 ‘Sampol’ by Xavier Garcia
Laura Imami launched a new collection of acetate frames that have been ground down from 1cm thick to give the frame more shape, the eyewear designer told OT.

“It is not mainstream, but is for someone who likes something a bit unusual,” Ms Imami said.

The eyewear designer, who worked in optics for 20 years before she started designing frames, explained that every style in the collection is hand-made and hand-polished.

Speaking about styles in her range, Ms Imami said: “I loved the idea of a square lens. One day I was drawing and thought, ‘What can I do that would be flattering but a bit more unusual?’ When designing eyewear, you have to ask yourself, ‘How far can you go?’ It has to be comfortable first and then do a different design.”

When designing eyewear, you have to ask yourself, ‘How far can you go?

Vaerk Copenhagen, the sister brand of Fleye Copenhagen, launched a collection of spectacles in partnership with Danish design duo Harrit-Sørensen.

The brand, which focuses on engineering and craftsmanship, has created a hinge that it said provides a high-level of precision and an aesthetically pleasing link between the front of the frame and the sides.

Frames in the collection are made from acetate, stainless steel and carbon woo, which produce a durable and lightweight frame.

‘No.104’ by Vaerk Copenhagen
Oliver Goldsmith launched its Winter Sun collection, inspired by a concept originally designed in 1969.

The sunglasses’ lightly tinted lenses were designed specifically to protect against glare on a winter’s day and have been updated to provide UVA and UVB protection.

Colour options are designed to evoke the hues typically associated with autumn and winter seasons, such as olive, potato and shadow. 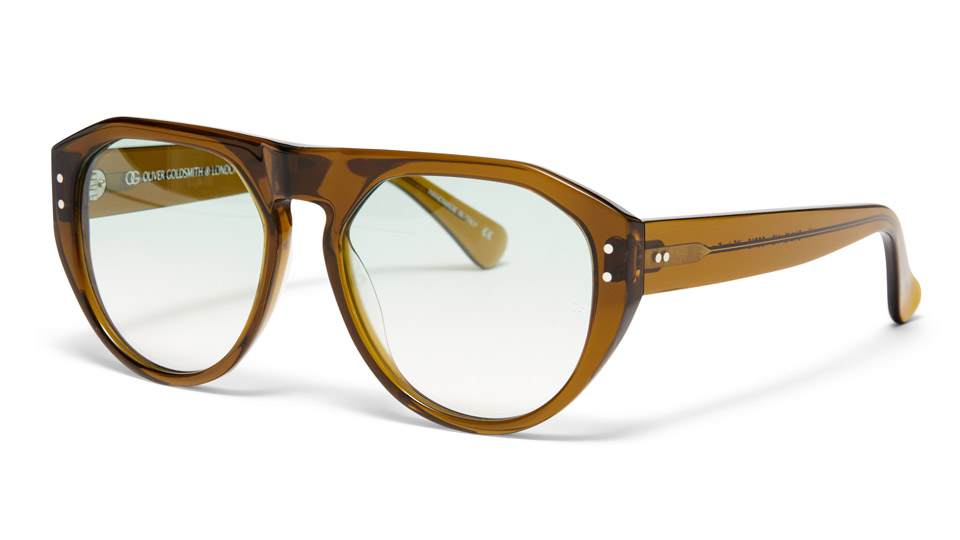 ‘Gopas’ by Oliver Goldsmith
Kirk & Kirk has added two new colours to its Kaleidoscope collection, as well as three new styles to its Centena range that are named after members of the Kirk family.

A marine colour has been launched in response to the popularity of blue and mauve colours among the eyewear company’s customers. 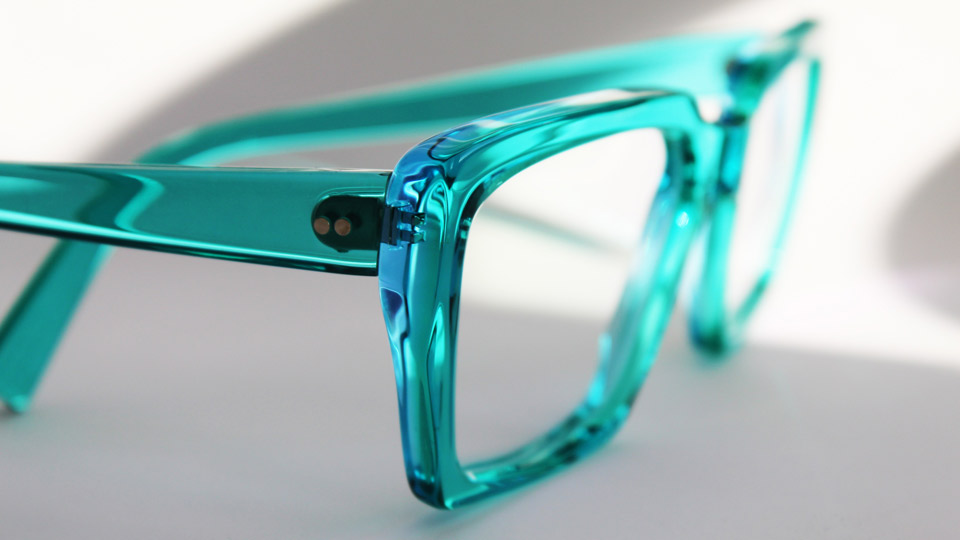 ‘Ray’ in marine by Kirk & Kirk