Exhibitors shared their thoughts and predictions about eyewear trends with OT 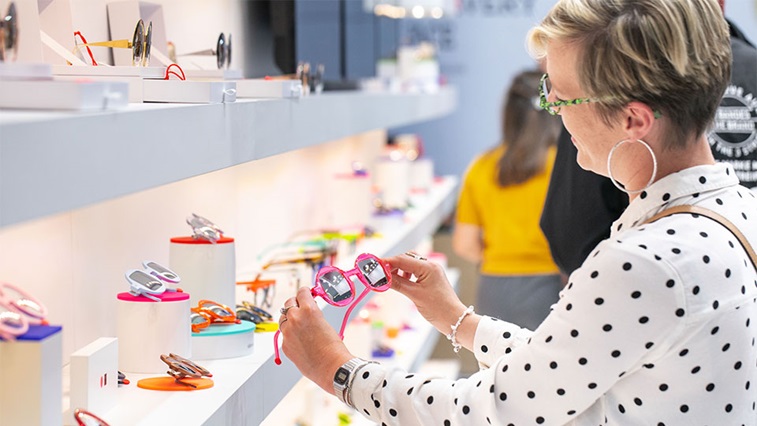 Pale colours, metal materials and geometric shapes were all frame features that were showcased at Silmo. OT spoke to exhibitors at the Paris show, which took place on 28 September–1 October, to find out what is trending.

“Where white has not always worked before, it’s the colour combination with the introduction of rose gold that lightens the whole thing. A slim angular design helps as well,” he shared.

“It’s finally come back after many years of trying. In the past, William Morris sold about 70% acetate and 30% metal. It’s about 45% metal now,” he told OT.

Ms Wilkinson noted that with titanium, eyewear companies “can express a lot of bold shapes.”

“We do bold and to make them wearable is always the challenge,” she added.

Creator of Wolf Eyewear, Margaret Wolfenden, highlighted that materials are getting thinner and stronger. “I think thin and angular shapes are going to be very big,” she said.

Ms Wolfenden predicted that trends will start moving away from the round eye shape. She said: “It won’t disappear by any means because everyone is wearing it but there will be some more angular frames that are a bit more fun.”

Founder of Fleye Copenhagen, Annette Saus Estø revealed that square shapes are creeping into collections. “I think the frames are getting a little smaller again and less deep,” Ms Estø said.

Extreme shapes that are smaller and thicker was noted as a trend for 2019 by founder of Vinylize, Zachary Tipton. “Last year was about bigger shapes with big lenses. This year it’s very geometrical – round, square or octagonal,” he said.

Innovations such as 3D printing have so far proved less convincing for some eyewear companies. Mr Morris admitted to OT that he might be missing something, but said: “For me, 3D printing is a bit of a fad.”

Fleye Copenhagen’s Ms Estø added that 3D frames are currently “too solid and boring.” She said: “They do not have any light or life in the surface. You can be very creative when it comes to the shapes but not with the colours and colour is very important for Fleye Copenhagen.”

For Kirk & Kirk’s founder, Jason Kirk, 3D printing does not offer the same level of innovation as independent eyewear companies currently provide. “3D will have its place but it’s important that it is not seen as replacing that independence, spirit, creativity and custom to a frame that you get from brands such as Kirk & Kirk. Look at how often we innovate with our collections, that’s not going to happen with 3D printing. The reality is that it is a long way off,” he said.