Raising the profile of lens protection 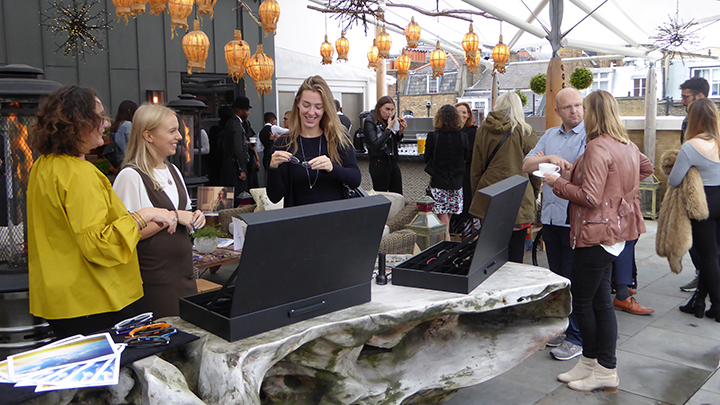 Transitions Optical has run in-depth testing to measure how exactly its full line of Transitions lenses can help to provide blue light protection both indoors and outdoors.

The company is highlighting that, although blue light is often associated with electronic devices and screens, most people do not realise the sun is the largest source of blue light, scattering it through the atmosphere and emitting over 100 times the intensity of digital devices and screens.

The company has revealed that Transitions Signature VII lenses block at least 20% of the ‘harmful’ blue light indoors, which is up to two times more than standard clear lenses, and they block over 85% outdoors.

Transitions XTRActive lenses are said by the company to be even more effective, by offering extra protection against blue light by blocking at least 34% of the ‘harmful’ blue light indoors and 88–95% of blue light outdoors.

To help raise awareness, the company held a drop-in breakfast event for invited members of the press (pictured), on the rooftop terrace of London’s Ham Yard Hotel (29 September).

Professor John Marshall, of University College London, was the guest speaker and explained the oxidative damage to the retina from various forms of light. He has been conducting research over the last 40 years, concentrating on the relationships between light and ageing.

“Eyes are much more susceptible to damage from blue light. It’s bad for the retina,” he warned journalists at the event.

He added that, although some blue light was needed to prevent the onset of seasonal affective disorder, “modern lens technology can get rid of harmful light and that which is not useful.”

Professor Marshall told OT: "Ultraviolet radiation is associated with a number of health risks, particularly for ageing skin and eyes. Short wavelength blue light is ultraviolet radiation's neighbour in the electromagnetic spectrum and has also been associated with damaging effects on the retina while, by contrast, long wavelength blue is known to contribute to general health and wellbeing.”

He added: “Wearing Transitions lenses blocks ultraviolet radiation from falling on the eye and reduces the amount of harmful blue light whilst not interfering with the longer beneficial wavelengths.”

Explaining the reasoning behind the press event, Transition Optical’s marketing manager for Northern Europe, Laurence Lepoittevin, told OT: “Being visible in key consumer titles, aside from traditional advertising, is highly lucrative for a prescription lens brand like Transitions. This is because a product such as this strongly benefits from explanation and demonstration on a personal level with the consumer, for example, on the page of their favourite magazine.

“We were pleased to host editors from titles such as Men's Health, Stylist and Marie Claire at our recent PR event and feel confident that the coverage obtained thanks to this will encourage readers to ask for Transitions lenses during their next visit to the opticians.”