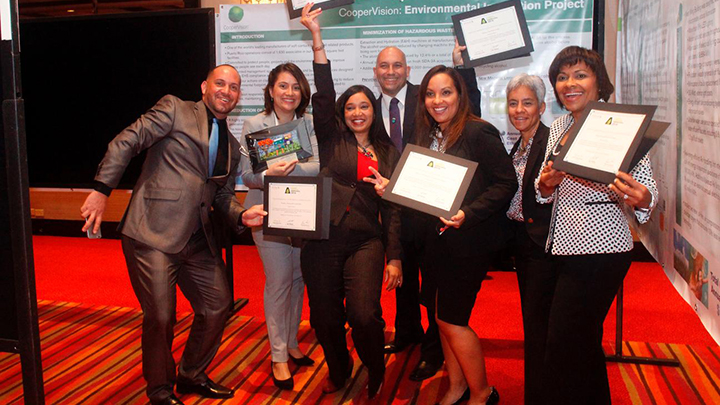 CooperVision has been honoured with a series of prestigious environmental, health and safety awards in recognition of advancements at its Puerto Rico high-volume contact lens production plant.

The contact lenses manufactured at the site, including the MyDay and Biofinity brands, are shipped to locations worldwide.

The company was lauded by the Puerto Rico Manufacturers Association (PRMA) for advances in its manufacturing processes, winning the Environmental Innovation Project of the Year Award.

The company reported an initial reduction of 12.4% in its use of alcohol and a 55% decrease in water demand for manufacturing purposes at its Puerto Rico facility. CooperVision plans to add two additional manufacturing lines to the environmentally sound process.

The company’s streamlined manufacturing process reduces landfill disposal. In addition, it presented cost savings of $1m last year, and is projected to save an additional $7.5m in operating costs by the end of 2017.

The company achieved the Recycling Platinum Award for recycling over 90% of its manufacturing process materials.

CooperVision’s Environmental, Health and Safety team (pictured) was recognised through The Best Practice Initiative Award. The accolade is presented to a company that is involved in innovative safety initiatives with exceptional results or that had excelled in occupational safety and health. The award was presented for the company’s ‘EHS annual refresher,’ a training initiative provided in a single multimedia experience that boosted attendance, management participation and comprehension of environmental, health and safety issues.

The President’s Award is given to the company with employee injury rates that are 50–74% below the national average. CooperVision accepted the award for the fourth consecutive year.

CooperVision was also recognised this summer by the Puerto Rico Aqueducts and Sewers Authority for its excellent compliance among significant industrial users. This places the contact lens manufacturer among a select group of companies, and is especially notable because of the size and scope of the company’s operations.

CooperVision’s senior vice president of Americas Manufacturing Operations, Rolando Torres, emphasised: “Our green practices reflect a commitment to protect and maintain healthy environments in the communities in which we operate, all while creating the highest-quality products and responsible economic growth.”

“Likewise, the health and safety of our employees is paramount to our continued success,” he added.

“It’s an honour to receive this recognition from PRMA, especially alongside some of the world’s largest and best-known manufacturers,” he concluded.

The plant also recycles up to 90% of its solid waste and 100% of plastic components generated by the manufacturing process. The facility derives 90% of its electricity from renewable sources.