Across the UK and Ireland 12 universities took part in Optoversity Challenge, in aid of VCHP

12 university teams across the United Kingdom and the Republic of Ireland took part in Optoversity Challenge, hosted by Out of the Box Optics, in aid of Vision Care for Homeless People (VCHP).

The annual competition, currently in its sixth year, aims to create a “fun and light-hearted” competition environment, testing students on various aspects of optometry through a series of quizzes and Objective Structured Clinical Examination (OSCE) scenarios.

Taking place as a charitable event, students and university teams were encouraged to fundraise for VCHP, with the funds raised going towards VCHP’s clinics. This year students raised just under £7000.

Optometrist and volunteer at VCHP’s new Gloucester clinic, Karen Gennard, took part as an assessor with third year students and said: “I was really pleased to be involved as having been qualified for some time, it was exciting to see how the next generation of optometrists approached the challenges. They showed great breadth of knowledge. I even learnt a few things.”

She also commented how it was a great opportunity to “explain how the funds raised for VCHP will help us to reduce health inequalities by providing eye care and spectacles to those who are homeless and vulnerable.”

VCHP Trustee, Janice English, added that, “the friendly nature of Optoversity, and the way it brings the country’s optical community together, reflects exactly what we are striving to achieve as a charity.”

The overall winner of Optoversity Challenge 2022 was The University of the West of England, Bristol (UWE). 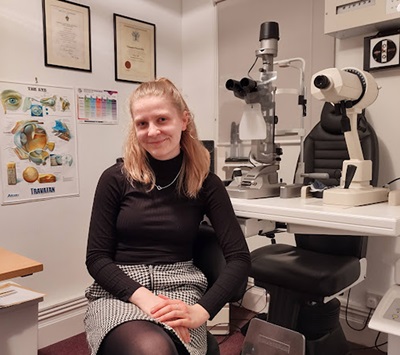 Reflecting on the success of this year’s event, optometrist and co-founder of Out of The Box Optics, Karmelo Modina, said: “to have 12 universities represented at this year's competition is unprecedented and has encouraged us to create even better ways within our platform to ‘routinise’ charitable service.”

He added, “we were so impressed by the students this year and humbled that they have trusted us to educate and entertain them simultaneously.”

The AOP supported and sponsored the event again this year, alongside FODO and the College of Optometrists.

Pictured is the UWE university team, winners of Optoversity Challenge 2022