An independent optical group in the South West is offering support to those affected by homelessness through a new charity partnership.

Haine & Smith, which has practices across Wiltshire, Gloucestershire and Oxfordshire, is set to offer free eye examinations and spectacles to those receiving support from regional charity Alabaré.

Alabaré has worked with homeless, vulnerable and marginalised people in the South West for three decades. Haine & Smith will now work alongside the charity, offering eye care to its residents.

After an initial pilot on 29 September, pop-up sight tests are set to be rolled out across various Alabaré locations, with residents being provided with glasses if needed.

The September pilot was held at Unity House, in Chippenham, Wiltshire.

“It’s been really well received,” she said, adding, “My first patient was really apprehensive as she thought she was going blind, but we managed to reassure her that she just needs some glasses to help with watching the TV.

“It seems such a small thing to a lot of us, but actually I think it’s going to make a big difference to her life.” 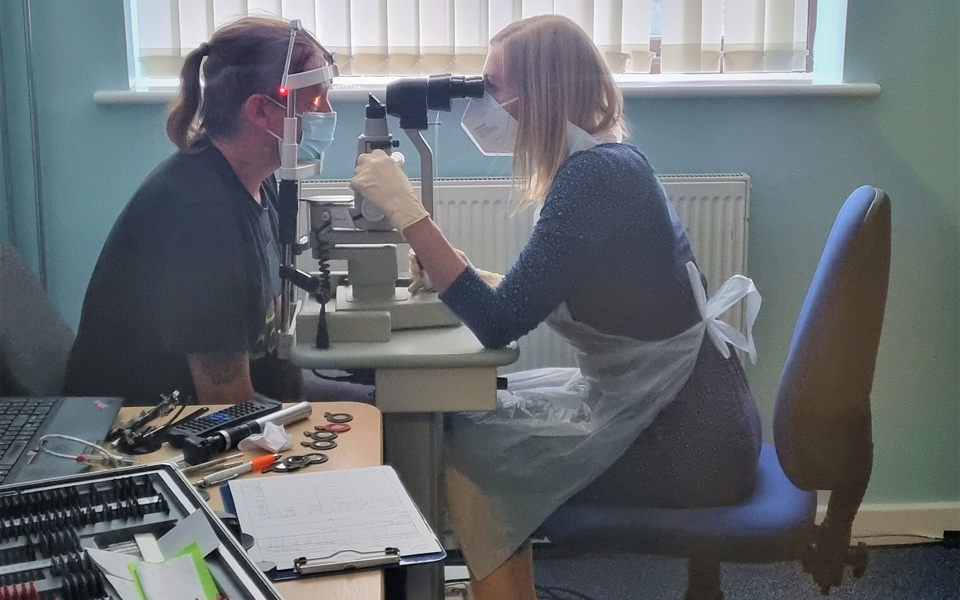 Anna Lewin, clinical lead optometrist at Haine & Smith, carrying out an eye examination on Terry, a resident at Unity House in Chippenham

If glasses are required, the patient will be able to choose a frame and Haine & Smith will return once the prescription has been added to perform the fitting.

The frames taken to Unity House were a mixture of brand-new pairs donated by Wolf Eyewear, and recycled pairs from Haine & Smith patients.

Lisa Thomas, health and welfare co-ordinator at Alabaré, said: “This new partnership will certainly help enhance our residents’ wellbeing. Not only does it give them the much-needed eye care they’re missing, it will also help them tremendously with their confidence.”

She added: “As word gets around the homes, we’re expecting more and more residents to come for a test. Hopefully, in the future, this could also be opened up to those living on the streets, not just in sheltered accommodation.”