On your bike: optometrist to cycle 2000km for charity

Stephen Kirley, a domiciliary optometrist in Glasgow, has passed the midway point of a challenge to cycle to football stadiums across Scotland for the charity Tiny Changes 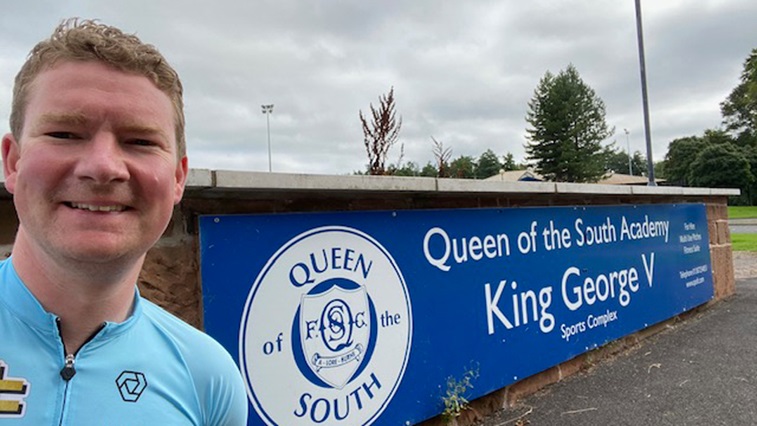 Glasgow-based optometrist, Stephen Kirley, has undertaken a challenge to cycle 2000km to football stadiums across Scotland to raise money for a mental health charity.

Mr Kirley started his cycling challenge in August to raise money for Tiny Changes, a charity established in memory of Scott Hutchison, lead singer of the Scottish band, Frightened Rabbit, who ended his life in 2018. The charity seeks to support young people in Scotland affected by mental health issues.

Explaining his decision to launch the challenge and raise money for the charity, Mr Kirley said: “This year, owing to the pandemic and the disruption it has caused, there has been an ever increasing focus on looking after our mental health and wellbeing.

“Charities like Tiny Changes are an essential support network for many people right now. This is particularly true here in Scotland, where the statistics of young male suicide are higher than anywhere else in the UK.”

This isn’t the first fundraising challenge that Mr Kirley has set himself, having run 10 consecutive days of 10 km road races to raise money for charity two years ago.

“I enjoyed the challenge and the physical nature of pushing myself but I wanted to try something a bit different this time around,” Mr Kirley added. “I collect football shirts; I’m a bit of a football ‘ground hopper’ and I enjoy cycling. I thought I’d try and combine all three elements into this challenge.”

With plenty of cycling routes across the central belt of Scotland, almost all passing by football stadiums, Mr Kirley said he worked out the distances and came to 2000km as his final target.

The optometrist has also made arrangements to visit a contact at Nairn County FC in the Highlands, who has been involved in the Tiny Changes charity, to further promote the charity.

Describing his early rides, Mr Kirley explained: “The first five rides were particularly excellent, with glorious sunshine on every ride, to the extent that I even got a bit of sunburn. Unfortunately, on the next two rides the heavens erupted and they’ve been very, very wet. However that’s only a small complaint.”

Mr Kirley crossed the halfway mark on 27 August and has completed 1110km. So far, the optometrist has visited 35 teams and their stadiums in his challenge and plans to complete 11 more rides and visit another 20-30 stadiums.

The optometrist has raised £886 of a £1000 goal, a target that he has already increased several times. Mr Kirley told OT: “I’ve been very humbled by the donations and know that the charity will do wonderful work with it.”

Reflecting on how COVID-19 has affected his own practise, Mr Kirley commented: “It goes without saying that COVID-19, the lockdown, and the subsequent restrictions have created an unprecedented set of circumstances for each and every single one of us.”

He explained that, as an optometrist working in the domiciliary care home sector, he has been on furlough since March, adding that he “completely understands” the rationale behind the measures taken to suspend services within care homes “in order to protect the most vulnerable people within our society.”

While routine eyecare in community practices in Scotland has resumed, routine domiciliary services within care homes have remained suspended.

“As a consequence I believe we are at a critical tipping point for optical businesses who deal in domiciliary care home provision,” Mr Kirley commented. “The Scottish Government has provided some welcomed support during the furlough period to businesses, which has been a lifeline to many. However, this alone will not sustain domiciliary optical services and their future when the furlough scheme ends.”

“It’s an incredibly worrying time for many employees across all sectors of society: retail, travel, tourism, hospitality, and indeed optics too,” he added.

For Mr Kirley, cycling has been an outlet during this period, and has been an activity that the optometrist has found helpful for his own wellbeing.

“That’s yet another reason to help support a charity that’s looking after folks’ mental health,” he concluded.