TV presenter Diane-Louise Jordan has returned from a trip to Rwanda, where she spent time visiting essential sight-saving projects.

Ms Jordan is best known for presenting Blue Peter and Songs of Praise, and last year took part in Sing or Swim for Stand up to Cancer. She was accompanied in Rwanda by her 12-year-old grandson, Preston.

Her trip to the East African country included visiting a CBM-supported eye hospital in Kabgayi, south-west of capital Kigali, and seeing first-hand how huge the impact of eye problems on those living in poverty can be.

A 2019 World Health Organization report found that more than one billion people worldwide are living with vision impairment purely because they are unable to access the care they need for conditions including short and far-sightedness, glaucoma and cataracts.

This means that half of the 2.2 billion people suffering from vision impairment or blindness globally fall into the category of those that are living with potentially preventable conditions.

For those living in poverty, losing sight can also mean losing the chance to go to school, to live independently and to earn a living. 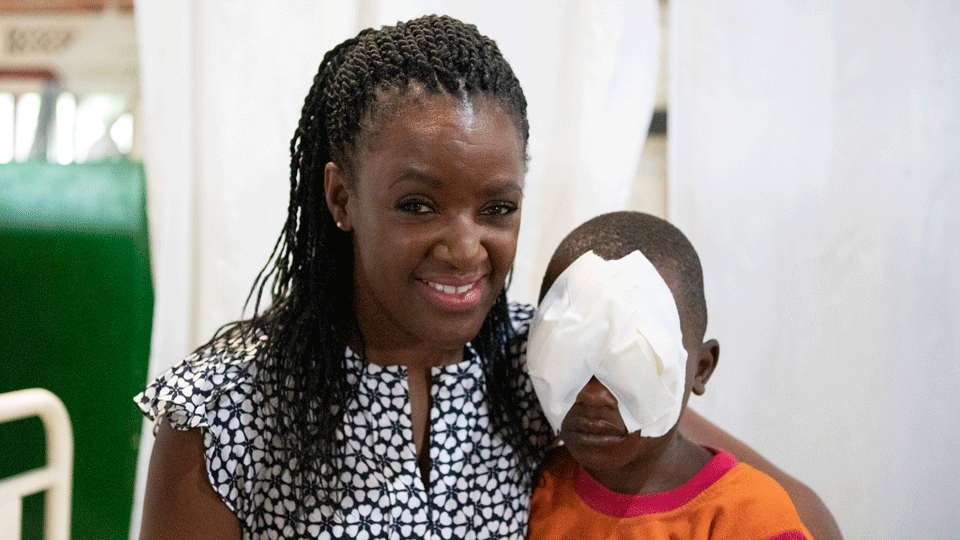 Diane Louise Jordan with Etienne, a 10-year-old whose sight was restored in Rwanda
The work that CBM does hopes to remove some of the barriers that those living with treatable eye conditions might face. In 2020, this includes a new initiative that’s designed to bring sight-saving services to those living in rural areas in Rwanda. As most of the country’s eye health services are found in Kigali, those without the means to travel or pay for treatment are often left experiencing needless sight-loss.

The three-year initiative, in partnership with Kabgayi Eye Unit, will train and equip eye health workers, including ophthalmologists, theatre nurses and ophthalmic clinical offices, at four rural hospitals. It will also enable Kabgayi Eye Unit to deliver an increased number of outreach camps in rural areas, which will deliver specialist services including cataract surgery.

CBM has been working with Kabgayi Eye Unit since it opened in 1993, with the aim of making eye health services available to those who are poor and vulnerable. The unit has three surgeons, who carry out around 25 operations on children and adults with eye conditions every day. It is also home to one of only two low vision units in Rwanda. Recent support from CBM has included funding outreach activities, equipment, staff training and infrastructure. A new paediatric ward has been made possible with the support of the charity.

If you know somebody and it becomes personal, it has much more of a reality about it.

During her trip Ms Jordan visited adults living with glaucoma and children who had undertaken sight-restoring cataract surgery, and witnessed how important support from the UK public is in making eye health services available to these families and individuals.

Ms Jordan has been a supporter of the charity for a number of years. She told OT: “I started realising more and more how casual we are about our sight in this country, even those of us who are more susceptible to debilitating eye conditions. Some of which is preventable, particularly cataracts. Treatment is typically routine, and can be carried out under local anaesthetic. You’re not even having to go through anything that extreme. You can get your eyes sorted out, come out, and pretty much get on with your day. It's so straightforward.”

The tragedy of people in poor, rural communities elsewhere in the world not being able to access this simple treatment and going blind as a result is one of the reasons why Ms Jordan was keen that her grandson went on the trip with her.

I started realising more and more how casual we are about our sight in this country, even those of us who are more susceptible to debilitating eye conditions

She said: “I’m all about family. I really believe that if you have your family around you, you stand a chance of having a better quality of life.”

It can be difficult for the public to understand the problems that those elsewhere face, Ms Jordan believes. Looking at the photographs on a charity’s website can still leave the most well-meaning people feeling detached, she shared.

“They (those in the photographs) have a name, they have a family, but we know nothing about their life other than they live in a developing part of the world with awful eye conditions, and that we’re being asked to help," she explained.

“It’s easy to get charity fatigue, to become immune to the need. But when you know the person behind the photo it becomes personal, it has much more of a reality about it,” she added.

We can give so little, and it can make such a life-saving difference to other people

Ms Jordan’s visit included meeting a 10-year-old boy named Etienne, a similar age to her grandson, whose cataracts had caused him to be blind for his entire life. The blindness had led to him being seen as a burden on his family, something that is only likely to have increased as he got older. After an operation, against the odds his sight was restored. Not long after, the boy who had previously struggled to feed himself was playing football. Ms Jordan felt, she says, that she had “literally witnessed a miracle.” 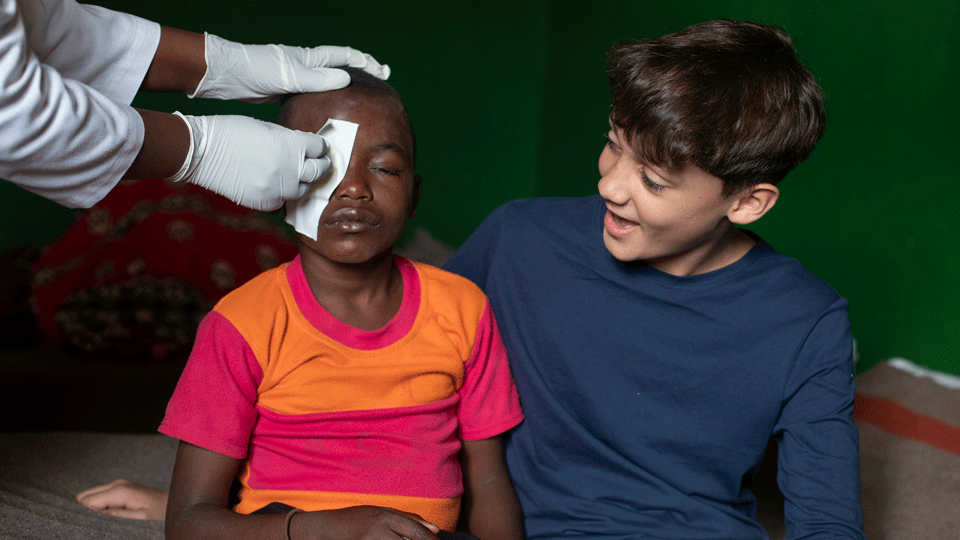 Diane Louise Jordan’s grandson Preston with Etienne after his operation
Now, 12-year-old Preston has plans to speak about Etienne’s story on Blue Peter. It’s a message, he says, that he feels he has to share.

Ms Jordan agrees. She said: “We can give so little, and it can make such a life-saving difference to other people.”

Ahead of National Glaucoma Awareness Week (12–18 June), organised by the International Glaucoma Association, she wants to emphasise, especially to those from the UK African Caribbean community, that treatments are easily available to them. She says: “We’ve got something on our doorstep, and we’re choosing to ignore it. We can’t give up that opportunity, when our brothers and sisters who just happen to be in different postcodes don’t have access to that. Not only can we help them, but we can also help them by appreciating what we have got.”

The charity hopes that Ms Jordan’s visit will help to educate people in the UK about the importance of eye health services, and encourage the public to support the its See the Way 2020 appeal. Until 12 May, the government will match all donations that are made as part of the appeal. The money raised will directly benefit people in the world’s poorest places.

CBM communications manager, Rosi Jack, told OT: “We are so thrilled by Diane’s support, as she really understands the impact of sight-loss. Both of her parents had serious eye conditions, and (she) shares our passion for ensuring that every person can fulfil their potential.

“It’s so easy for us to take our sight, and access to services like glasses or cataract surgery, for granted.

“We hope that Diane’s visit with her grandson Preston, and her wonderful talent for touching people’s hearts and minds, will help us to educate people in the UK about the importance of eye health services.”

Ms Jordan has personal experience of the pain that eye diseases can bring. Her father lost the sight in one eye after an accident at work as a young man, and both her parents later developed glaucoma. The disease left her father almost completely blind.

Speaking about her own experience, Ms Jordan said: “After seeing the deep impact glaucoma had on my parents’ lives I know how vital it is for everyone to access eye tests and treatment. It’s so easy to take our eyesight for granted until we start to lose it.

She added: “As a mother and grandmother I can’t imagine what it’s like to see your child needlessly lose their sight. Watching them struggle, knowing that treatment is available – but out of reach.

“Because of the impact eye disease has had on my family, I’m passionate to raise awareness about the need for everyone to have access to eye screenings and treatments, and to help raise funds through CBM to ensure that nobody around the world goes needlessly blind.”

Until 12 May, every donation made to CBM will be doubled by the UK Government. Find out more about making a donation here.