Sightsavers’ director of mHealth and innovations for neglected tropical disease, Sarah Bartlett, talks to OT about the importance of data capture and technology to its current End is in Sight campaign that aims to help eliminate trachoma

What role does data play Sightsavers’ End is in Sight appeal?

All of the work that we do at Sightsavers is based on data and evidence. The high-quality data that those in the trachoma community have collected on the condition’s prevalence and interventions, along with the data that we collect in our own programmes, shows us exactly where and how the money raised in appeals like our End is in Sight campaign can be spent. Being a data-led organisation helps us use all of our donations to their full potential.

The campaign highlights that 157 million people worldwide are at risk of going blind from trachoma. How does the charity use technology to collect this data?

We know where countries are on the path toward trachoma elimination thanks to a service called Tropical Data, and its predecessor, the Global Trachoma Mapping Project.  Sightsavers and partners led in the creation and management of both of these tools.

The Global Trachoma Mapping Project was a remarkable undertaking in public health, mapping the prevalence of the disease in 29 countries. More than 550 teams visited and surveyed millions of people using standardised methodologies. Data was collected on smartphones and then uploaded directly from the field to a web-based system.

Tropical Data goes beyond mapping the disease and helps countries run standardised smartphone-based surveys to know where trachoma interventions need to be started, continued, or, if successful, stopped.

Tropical Data goes beyond mapping the disease and helps countries run standardised smartphone-based surveys to know where trachoma interventions need to be started, continued, or (if successful) stopped

What data does Sightsavers collect about trachoma and why?

The strategy to eliminate trachoma is the World Health Organization-endorsed SAFE strategy (Surgery, Antibiotics, Facial cleanliness and Environmental improvement). The trachoma community and Sightsavers need data on every component of that.

Surveys are important both so that we know where interventions need to take place, and so we can gather evidence for the World Health Organization to prove when countries are free from the disease. However, we have also worked on data collection in programme implementation.

One example of this is around the ‘A’ in SAFE – antibiotics. Many trachoma programmes are implementing mass drug administration (MDA), in which entire populations are treated with the antibiotic Zithromax. This is an enormous undertaking. These MDAs take place within local communities, so it’s really challenging to monitor treatment. We’ve worked with ministries of health to collect data using phones in real time throughout the campaign so we can respond to issues as they are happening.

Another is the ‘S’ in SAFE – surgeries. These surgeries are required to treat advanced trachoma. They are generally conducted in remote settings, which can make it difficult to follow-up and assess surgical outcomes. We developed a smartphone-based application called the TT Tracker to help surgeons, assistants and supervisors collect and analyse data on surgical outcomes and to know when and where follow-up appointments are needed.

Who collects this data and how is it collected?

With our data collection activities being as cross-cutting as they are, we have a wide range of people participating. For the most part data are collected using smartphones, but in the case of monitoring MDAs, we use the regular phones that health facility workers already own.

When we do surveys, teams are trained up on the methodologies of the survey and use of the smartphones and then sent out for this short-term exercise. For programme work data is collected as part of regular activities. Health facility workers who would usually have to tally MDA data from their areas send totals in over the phone, and surgeons and their assistants who previously filled in paper patient record cards now enter the information into smartphones. 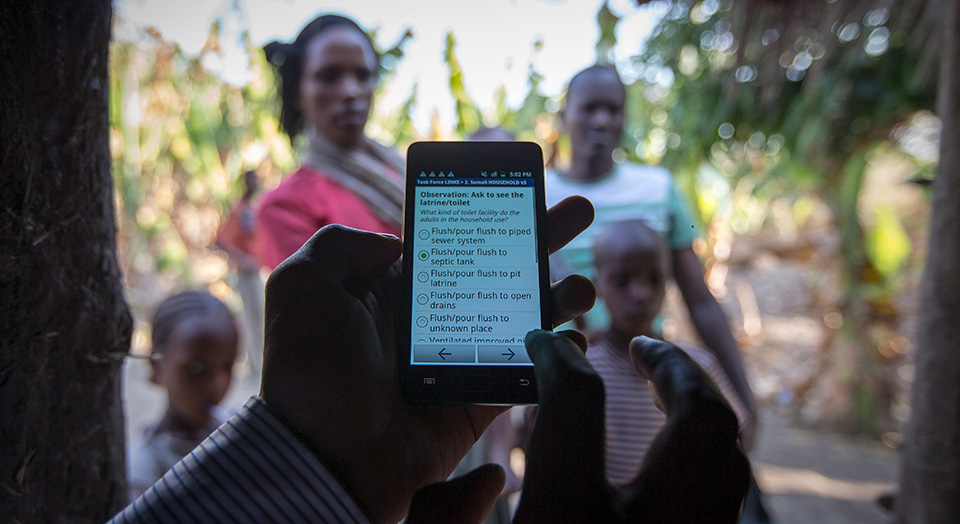 What do you do with this data once collected?

This hits on something we’ve been concentrating on in all of our programmes – the use of data for decision-making. The first step is collecting the right high-quality data and the second step is actually using what you’ve collected. This is important for everyone involved – funders, charities and ministry of health staff at all levels.

A good example of supporting data use in programmes is the TT Tracker. Capturing information on each surgical intervention is great, but then what? We’ve created interactive and easy reports to help programmes use what’s collected. These include summary reports with demographics and surgical outcomes for managers, patient follow-up lists for surgery teams to schedule appointments, individual surgeon reports so each surgeon can see their performance and contribution.

Why is mobile technology so important to data collection for Sightsavers?

Mobile technology brings us so much in terms of data collection: speed, accessibility, consistency.

And while we’re mostly focused on data collection using mobile phones, it’s interesting to note that another side of using mobile phones in trachoma exists, which is using them as a communication tool. We have two examples of this thus far. One is an SMS-based application which allows community health volunteers to continue their trachoma training, take quizzes, and connect with others. Another is focused on behaviour change, and has community leaders using tablets to monitor data on sanitation indicators and children’s ‘clean faces’ – the ‘E’ and ‘F’ in SAFE, respectively.

Mobile technology brings us so much in terms of data collection: speed, accessibility, consistency

How can data make a difference among decision-makers in order to bring change?

High-quality data has the power to bring people around a common goal. The best example I can give of this is the Global Trachoma Mapping project. The results from that undertaking have been widely lauded as the catalyst for the global community’s push to eliminate trachoma. For the first time, everyone could see and agree on what it would take to eliminate this agonising disease. There are no mysteries, it is just a matter of putting in the work to make it happen.

Sightsavers has launched the End is in Sight campaign as part of its goal to eliminate trachoma in the countries it works in by 2025. Between 15 February to 15 May, the UK Government will match all donations, up to a total of £2m.