The fight against trachoma 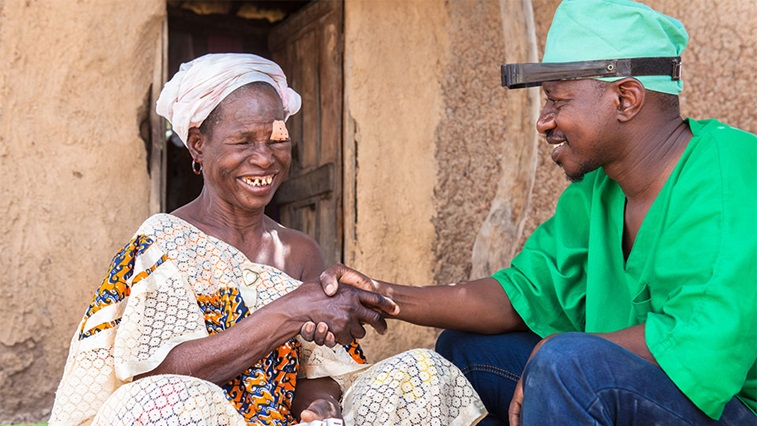 What is Sightsavers’ End is in Sight campaign?

We want people to join us in making history and eliminating one of the world’s oldest diseases, the blinding eye condition trachoma, and saving millions of people from agony.

What are the main aims of the campaign?

Trachoma has devastated the world’s poorest communities since the earliest records and the End is in Sight campaign invites people to help us make ending the pain that it causes a reality. It is about raising money to help us consign blinding trachoma to the history books.

Between 15 February to 15 May, the UK Government will match all donations made to the campaign, up to a total of £2 million, enabling us to help twice as many people.

Trachoma is the world’s leading cause of infectious blindness and has existed for thousands of years. It’s a bacterial eye infection that makes your eyelids turn inwards until your eyelashes scrape against the surface of your eyes. Yet trachoma is totally preventable.

Sightsavers has been fighting trachoma for many years and now elimination is only a few years away – it’s a hugely exciting and historic time, as we push towards this milestone in the history of human health.

Trachoma can be treated with an antibiotic called Zithromax, which costs as little as 15p per treatment. For those with the advanced stages of the disease, a straightforward surgery costs £44.

Trachoma has already been eliminated in some countries including Oman, Morocco, Mexico and Ghana, meaning millions of people no longer live with the pain, suffering and blindness that it can cause. Yet there are still 43 countries globally that count trachoma as a public health problem.

We want to raise awareness of this disease and encourage global communities to come together and end it. We hope that this campaign, which aims to help eliminate the disease, will appeal to a wide audience, drawing new supporters to Sightsavers’ work.

Why should people make a donation?

Trachoma is a horrible disease, causing pain and discomfort. Many people with trachoma complain of itchy, watering eyes. Those with the advanced stages of trachoma often pull their own eyelashes out to stop the painful scratching.

Trachoma stops children from playing with their friends and going to school. And it stops adults from working, looking after their families and being a productive part of their communities. But it’s preventable.

Making a donation to Sightsavers will help us prevent millions of people from contracting trachoma.

When match-funding ends in May, what are the first steps that Sightsavers will take in its work to eliminate trachoma?

Although the UK Aid Matched appeal period will only run until May, our work won’t end there and the End is in Sight campaign will run until 2021.

The money that UK Aid gives us will go specifically to a new project in Tanzania. It will go towards treating trachoma and other eye conditions, and will have a transformational effect on the lives of some of the most marginalised people in Tanzania.

The project will work to restore, save and protect people’s sight in an inclusive and accessible environment. Working with communities at the local health facility level, we will create positive and lasting change to eye health outcomes. Our focus will specifically target and involve people with disabilities, women and older people.

This project will support the provision of eye examinations for 90,000 people by 2022.

You hope to eliminate trachoma from the countries you work in. What will make that possible?

Collaboration and combined efforts. Sightsavers isn’t working alone, and nor could we.

Coalitions and networks, such as the International Coalition for Trachoma Control, allow us to work in collaboration with other organisations with the same goals, ensuring work is not duplicated and that partners are working together rather than competing, and therefore reaching more people in need with greater efficiency.

Sightsavers and partners work with and support ministries of health and national authorities. But we also operate at the district and community levels, working with community leaders to understand the cultures and needs of each community, which can significantly affect the effectiveness of our programmes.

We need ministries of health to continue their good work and we need to continue to teach children how to wash their faces and improve community cleanliness.

We particularly need to focus on countries in conflict, such as Yemen and Sudan, because they come with a whole set of challenges to delivering healthcare, but can’t be left out in the fight against trachoma.

Most importantly, we need continued support from the public and our donors. Without this support none of our work would be possible.

What will the elimination of trachoma mean to Sightsavers?

There are around two million people in the world who are blind or visually impaired because of trachoma. To be able to stop this disease in its tracks and to prevent it from robbing future generations of their sight would make all the hard work worthwhile. We’d be making history.

For more information on the campaign, visit the Sightsavers website.