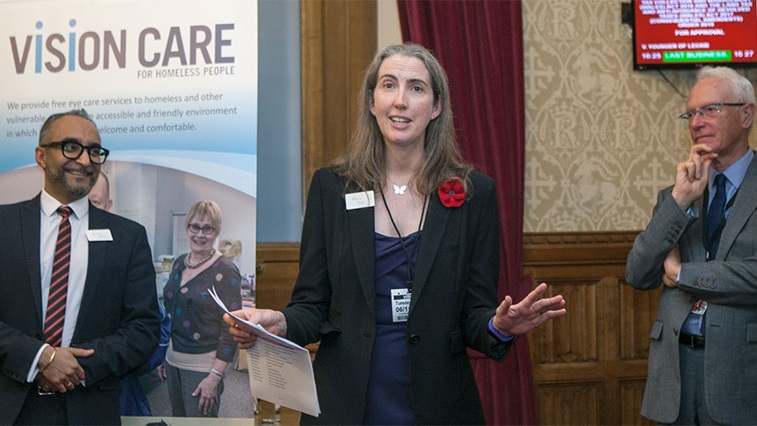 Vision Care for Homeless People (VCHP) made a rallying call to provide 40% of the UK’s homeless population with eye care at an event held at the House of Lords last week.

The event, which was held on 6 November, marked the 15th year since the charity was established and plans were announced to increase the number of people reached by VCHP.

Chair of the charity, Elaine Styles, announced ambitions to increase the number of static clinics, get a mobile van and partner with High Street practices.

Speaking at the event, Ms Styles said: “Eye care is as important as any other healthcare, especially for those surviving in a high risk environment. We helped nearly 2000 people here in the UK last year, but this is not enough.”

“We need to work hard to reduce the barriers to accessing healthcare,” she added.

Trustees, volunteers and supporters were welcomed to the House of Lords by independent peer, Lord Filkin, who is a longstanding patron of the charity.

He said that VCHP is “an enormously important organisation to be associated with” and challenged attendees to think about what needs to change for more homeless people to receive care.

At the event, Stan Burridge, from healthcare for homeless people charity Pathway, spoke about his time as a homeless person and the barriers to accessing healthcare.

He shared that homeless people do not like interacting with systems and end up “disengaging when you need it the most.”

Attendees also heard from optometrist, Niamh Harmsworth, who shared that the day she volunteers at VCHP’s Brighton clinic is her favourite day of the week.

“It is very easy to get bogged down with the minutiae of middle class life, but this gives real perspective. If anyone is interested in volunteering I say, ‘Just do it’,” she said.