VAO honours optometrists who have made outstanding contributions to the charity 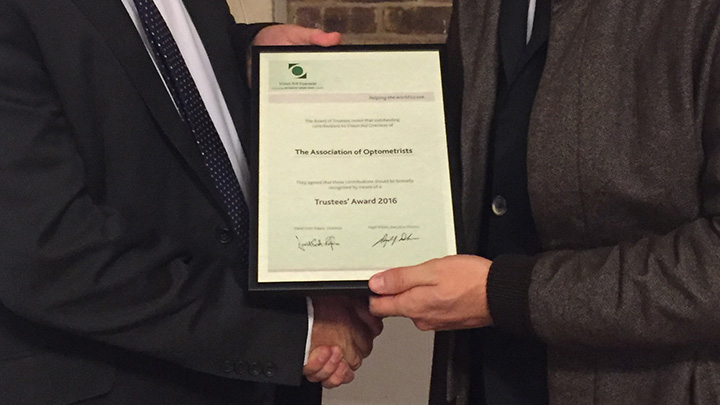 Vision Aid Overseas (VAO) has recognised optometrist Vera Wilton with an Honorary Life Membership for her services to the charity.

The award was presented at a gala dinner event in Crawley, following the charity’s annual general meeting on 22 October.

Presenting the Award, VAO chairman, David Scott-Ralphs, described Ms Wilton as “a consummate team leader, an ambassador and a fundraiser. Her energy and enthusiasm for the work and the health of the charity has never waned or faltered.”

“Always willing to take on additional tasks to support our work, she took over responsibility for our fledgling programme in Ghana without hesitation. Under her stewardship, we know Ghana will be in safe hands,” he added.

Ms Wilton’s first training assignment for VAO was in 2004 to The King Menelik ll hospital in Addis Ababa, and she has returned on this assignment as a team leader. She has also volunteered in Southern Ethiopia.

Speaking to OT at the event, Ms Wilton described winning the award as “an absolute honour.”

“I have been working in optometry for 41 years, and I am so privileged to have a job that enables me to give something back to those who have nothing in developing countries,” she said.

“A simple pair of spectacles can make such a difference to someone who can’t see,” she emphasised.

Mr Scott-Ralphs added that, “Vera embodies the best qualities of a professional volunteer and whilst we have such supports, the future of Vision Aid Overseas is assured.”

Mr Offord has completed 13 assignments for the charity as a volunteer, deputy or team leader, including working in Burkina Faso, Ethiopia and Zambia.

He was a member of the charity’s overseas project committee and has raised awareness of VAO by giving talks and presenting information to various groups with great success.

Ms Shaw has been a member of the charity since 2001 and has completed 11 assignments as volunteer, deputy team leader and team leader.

She has represented VAO at the Ethiopian Optometric Association Conference where she presented a lecture and raised awareness. While working for Dollond & Aitchison, Ms Shaw led a funding initiative to set up the Vision Centre at the Menelik 11 Hospital in Addis Ababa.

Corporate trustee awards were also presented to the AOP, ABDO and the College of Optometrists in recognition of the support the bodies had provided to the VAO “over a number of years.”