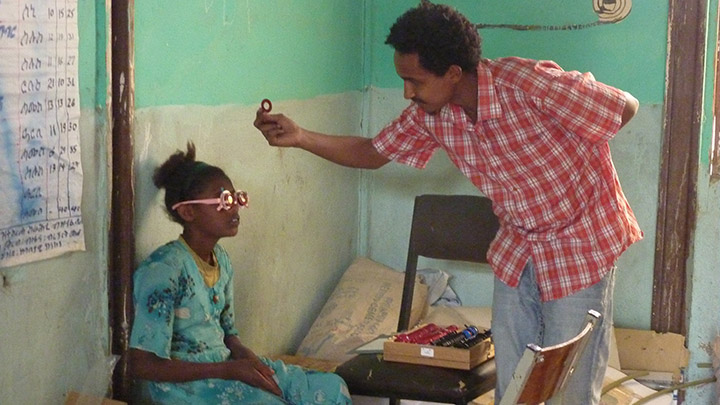 The portable eye examination kit, Peek, has been used by a UK charity to determine if sight impairment is a factor in children dropping out of education prior to secondary school in Mekelle, Ethiopia.

Led by UK optometrists Dr Usha Dhanesha and Peter Howard, and supported by data analyst Mohan Smith, teachers were taught how to use Peek and subsequently screened the sight of almost 1200 children. Those who were identified as having refractive error were given a full eye examination by an optometrist on the team, with others referred to the local Quiha Eye Hospital.

The charity, which is working closely with Special Educational Needs Tigray on the project, explained that while the majority of children who required vision correction were supplied with pre-glazed prescription spectacles immediately, others received spectacles that were glazed in a laboratory in the local eye hospital, which was set up by Mr Howard five years ago.

The vision screening data was downloaded and will be used for international comparison.

Established by ophthalmologist Dr Andrew Bastawrous, Peek Vision is a smartphone-based system that has been developed as an affordable, user-friendly alternative for performing comprehensive eye exams anywhere in the world. It consists of a suite of apps, an adaptor for the phone’s camera, integrated systems to share the data with specialists and a training programme.

It is now used extensively in Kenya, Botswana, Mali and Malawi, and is currently being considered for widespread use in India.

Sight Aid International reports that Peek screening has been welcomed by the Education, Health and Social Bureaus in Tigray, the region where the city Mekelle is based. It now hopes that, with support from the Ethiopian government, the portable mobile tool will be used to screen the sight of children in Mekelle’s 90 schools, with further rollout across Tigray.