The contact lens pioneer passed away in June, at the age of 96

OT is sad to report the death of John de Carle, optometrist, contact lens pioneer and first president of the British Contact Lens Association (BCLA), at the age of 96.

Described as ‘a true visionary’, de Carle pioneered the creation of soft permanent contact lenses and in doing so brought improved vision to people throughout the world.

De Carle was born on 26 May 1926. He qualified as an optometrist at Northampton Polytechnical College in London in 1945, before being called up to work in Royal Airforce (RAF) hospitals as part of his National Service. 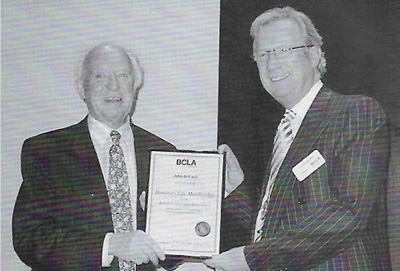 As an optometrist, he pioneered the idea of soft permanent contact lenses, complex polymers, and contact lens solutions.

Luke Stevens-Burt, current chief executive of the BCLA, identified key contributions from de Carle’s career as including a bifocal patent in the 1960s and the creation of Permalens in the 1970s and 80s, which he calls his ‘most innovative success.’

De Carle became the BCLA’s first president in 1977, and in 2006 he was recognised with honorary life membership by the association.

He continued to run his New Bond Street practice until it was sold in 2002.

He passed away in his sleep on 27 June 2022. A funeral service was held at Guildford Crematorium, Surrey, on 27 July, with donations being made to Cancer Research UK.

Stevens-Burt called de Carle “a true visionary whose determination to produce game-changing innovations made a life-changing difference to millions.”

He added: “His contribution to the contact lens industry was significant and all-encompassing due to his enthusiasm to improve on products, and he was involved in many aspects of the business during his life.

“His work has always been revered by his colleagues, and the contact lens profession has lost a legend.”