Haine & Smith optometrist, Mark Saunders, and Emma Fleming, wife of patient Andrew, on a referral that led to the identification of ocular melanoma and the importance of early detection

Before Andrew went for a sight test, had he experienced any symptoms and how had this affected day-to-day life?

Emma Fleming (EF): Andrew had no real symptoms. He was a very fit and healthy man who played tennis and cycled a lot. He mentioned a couple of times that he had a flashing behind his eyes, especially at night when he closed them. He described it as being a bit like lightning. Because he wasn’t getting any other symptoms, it wasn't something that he thought about too much, but it got to the point where he wasn't sleeping properly. One morning he said: “I've had no sleep at all. I've got this awful flashing going on behind my eye.” There was no pain, just the flashing. I suggested he see Mark at Haine & Smith, who has been looking after the whole family's eyes for years.

What did the optometrist find, and how did they explain the next steps?

EF: I think the key to Mark picking this up was that he carried out a thorough examination and dilated Andrew’s pupils. From there, Mark recommended he go straight to Great Western Hospital and made an appointment for him to see an ophthalmologist.

He went up that that day. It was looked at and they said that it was a tumour. They weren't certain what kind of tumour it was, so they said that he'd have to go to Liverpool for specialist treatment.

Andrew came home, sat down in the chair and he said: “I've got a tumour behind my eyes.” It was a surreal moment, and neither of us could quite take it in, because there was no warning. We're very grateful to Mark for picking it up. I think he bought Andrew quite a lot of time, because there were no real symptoms, and as it is a blood-borne cancer it can go straight to the liver.

Ocular melanoma is so rare, our GP had never seen a case before

Was further treatment required, and if so, what followed the referral?

EF: We had to wait a couple of weeks for an appointment in Liverpool. Andrew spent the day on the unit having his eye photographed and looked at.

We were asked to go into a room, and the consultant explained that he'd got a very large ocular melanoma that seemed to be spread around the eye. He suggested that he have his eye removed immediately. We had no time to process. The whole thing was just so shocking, because he'd gone from being a really healthy man to having this horrific tumour that seemed to have been growing quietly for about 18 months.

There was nothing they could do. It is a matter of having regular scans and while there are options, there is not a cure. At that time we were told it was a terminal illness.

We went back for six-monthly scans. It was a rollercoaster of emotions. He had a scan in the January of the year he died and we noticed that they weren’t as positive as they usually were. Six months after that, in June or July, it was definitive. It had spread to several areas of his liver. We were told in the September that he probably had four to six months left, and he died in the December.

We filled that year with as much as we could. He went heliskiing in Canada with a group of friends. My daughter and some of her friends ran the Hackney Half marathon and raised £15,000 for the OcuMel UK charity. We had the Hospice at Home service from Dorothy House, who were brilliant, and so he was still part of the buzz of family life. My eldest daughter brought her wedding forward and we managed to pull it off in three months. Everybody, friends and family, rallied around, and he was able to walk her down the aisle. 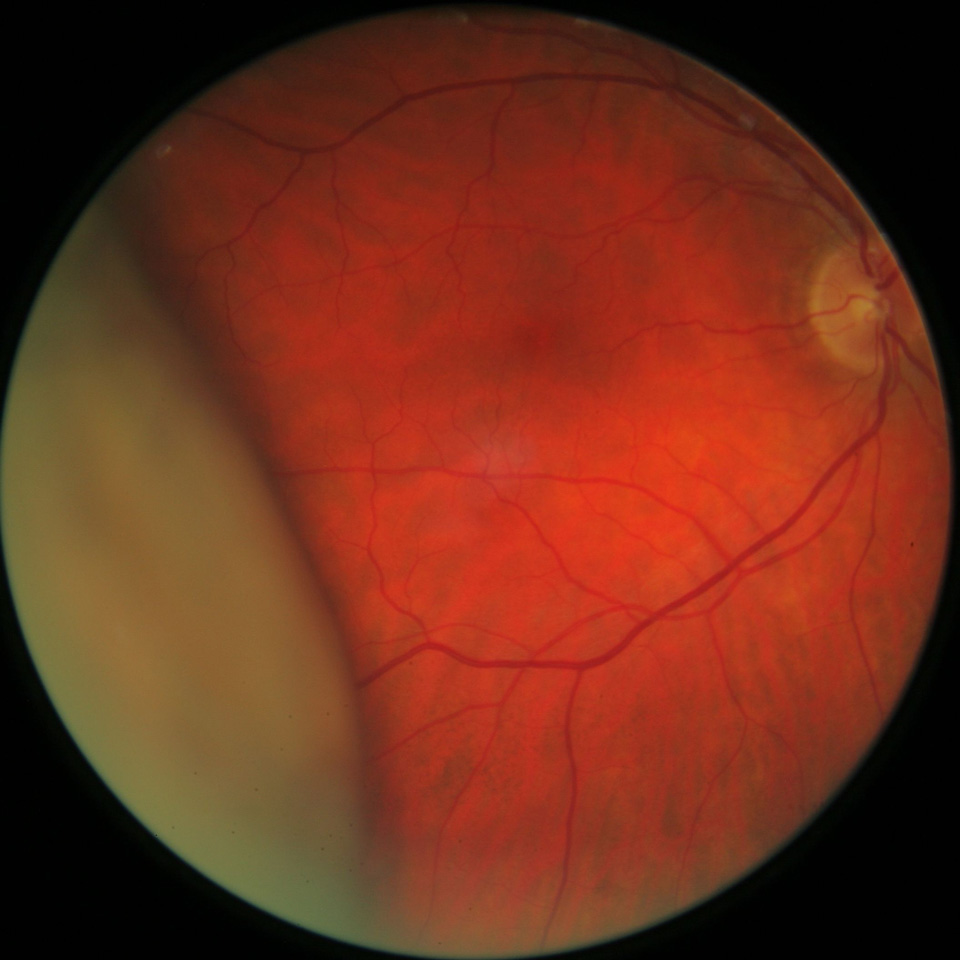 EF: The thing that needs to come out of this is that if you have a regular test then things are going to be picked up much more quickly. We all had regular sight testing with Haine & Smith and so we had already established a relationship with Mark.

There are only 500–600 ocular melanomas diagnosed every year, so it is very rare, but you never think it is going to happen to you. Ultimately, it is incurable, but if a tumour is picked up more quickly, there is less likelihood of it spreading and if you have the right type of ocular melanoma it is treatable and can give you more time.

A lot of our friends and family are now having regular tests. Certainly within our circles, it has made a difference and people are getting checked. I also believe dilation is really important. It’s important for optometry students to learn to have a proper look at the back of the eye and learn what to look for.

Community and education: Emma on the support of OcuMel UK

EF: OcuMel UK were fantastic. What I found the most useful was the online forum hosted by the charity. It provided a really supportive network of people who were all going through the same thing.

Ocular melanoma is a very isolating cancer in many ways. All cancers are horrible, but this one was particularly cruel because there was just no treatment for Andrew. The forum was a safe space where you could discuss everything, or say that you were having a bad day, and people understood.

The charity also raises awareness of eye cancer. Ocular melanoma is so rare, our GP had never seen a case before. One of the things that Andrew and I both found was that ocular melanoma is a type of cancer people don’t understand. That is why it's so important to raise awareness. 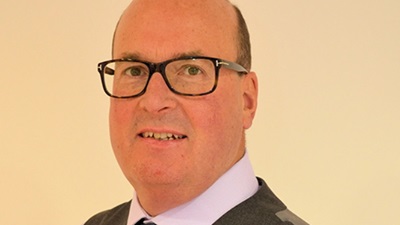 Mark Saunders
Mark Saunders (MS), optometrist and partner at Haine & Smith Opticians: I saw Andrew on 21 March 2017. He explained that for two weeks, he had experienced a gold flickering and flashing in the right eye on waking and during the day, which had been getting worse over time. He had what he described as a floater in his right eye.

The refraction was normal and because of the symptoms, I dilated both eyes on the day. If there is poor vision you can't explain, flashing lights or floaters, or you can't see the back of the eye because of small pupils or it's a bit cloudy inside the eye, then I always dilate. I virtually always dilate on the same day they come in, because if there's enough reason to dilate them, and there's enough reason not to drive.

Because of the dilation I found a large detached retina with the appearance of something solid pushing behind it. I couldn't see any pigment in the anterior vitreous, which you would expect to get if you had a detached retina.

MS: Normally the retina appears to be pulled off. But I explained it looked like there was something solid behind the retina and that it looked like it had been pushed off from behind. I couldn't really see why, but it could only really be a tumour.

I made an immediate referral to the local Great Western Hospital in Swindon. I rang them up to explain what was going on and Andrew was seen that same day.

MS: Andrew was sent to Royal Liverpool University Hospital and it was there that they confirmed that it was a choroidal malignant melanoma.

The day after he was seen in Liverpool they took the right eye out. His vision was 6/6 in both eyes when I saw him but they needed to remove the eye because of the size of the tumour. I was very surprised they removed a sighted eye. The tumour looked like it was coming from the anterior part of the eye, which was why it was picked up fairly late. Without dilation, you may not have seen it. I use a Volk lens, which gives a much bigger field of view than with a direct ophthalmoscope.

What are your reflections as an optometrist following this experience?

MS: The practice has seen six choroidal malignant melanomas in the last six or seven years. They are uncommon, and I had spent my whole life not seeing anybody with one but now I’ve picked up four or five of them myself and my colleagues have picked up several.

In other cases it has been caught earlier, because the choroidal melanoma has been near the point of fixation. In Andrew’s case he had no symptoms until it probably broke through Bruch’s membrane which caused the flashing lights as the retina was disturbed.

It makes me think about it more often. I also now dilate more.

What would be your advice to other practitioners when making a referral?

MS: I think the important thing is to listen to the patient when they come in. Ask: “What is the reason you have come in today?” Don't assume it's just a routine check.

Sometimes if you don’t ask the patient why they have come in, chances are they won’t tell you something important until they are leaving the door. If you ask at the beginning, then you can steer the examination to do what you need to do.

I always type up the referral and email to the hospital, then ring the hospital to confirm they have received it and what the action is. Or I ring first. Then, when I refer the patient I give them a copy of the referral letter.