Through the Time to speak series, OT profiles how discrimination in the workplace is affecting eye care professionals. If you would be willing to share your experience, please contact [email protected]

Optometrist Akbar Shah: “At the age of 41, I’ve decided it needs to change”

I absolutely love the profession, but are things that go on in the background which can make people feel very uncomfortable. A lot of people don’t want to speak about it for fear of reprisal. There is a massive fear factor, especially among locum optometrists. You can lose your days in a flash.

I live in Devon but I was born and raised in Bradford, in West Yorkshire. My parents came over from Pakistan before I was born. They were both illiterate and spoke very little English, so from a young age I was filling in forms and making appointments for them. It was a pleasure for me to go into the field of optometry so I could help people like I had helped my parents.

These comments can mean that you go home feeling disheartened and alienated, but there is nothing wrong with you. You should be proud of who you are

I went to the University of Bradford in 2000 when there were just over 100 students in my year with a 50/50 split between BAME and white students. In labs, it felt like the supervisors spoke differently to myself and other Asian students. They would ask us a string of questions, then they would walk along to the next cubicle and say, ‘How are you guys getting on?’ like they were pals. I wondered what we had done to upset them.

I saw how BAME students struggled to find pre-reg placements. I only got my placement three weeks before graduation in the third year. When I was getting called for interviews, there would be a dozen students turning up from up and down the country. All of them were Asian. When you’ve got your name written on the CV, ‘Akbar Shah,’ it’s going to get overlooked for ‘Adam Smith.’ Your name and your face doesn’t fit.

When I was in my pre-reg placement, there was a locum optometrist who knew I was from Bradford. A few months in she referred to the community of Bradford as ‘Pakis.’ I had heard that word so many times growing up, I could have mistaken it for my name, but that was the first time I heard it in a professional environment.

During an eye examination, the patients would say ‘Where are you from?’ I would say ‘I’m from Bradford.’ They will say ‘No, no – where were you born?’ I could get asked that question once a day. It made me feel like a second-class optometrist. I had a patient I saw several times who refused to call me Akbar; he would call me Dave. There was another who said to me ‘Have you got your passport to get here?’

Patients would book in appointments and jump to conclusions from my name. They would ask the receptionist ‘Am I going to be able to understand what he is saying?’ Every time there was some sort of terrorist incident, patients would look at me and ask – ‘You’re Muslim, what’s your opinion?’ 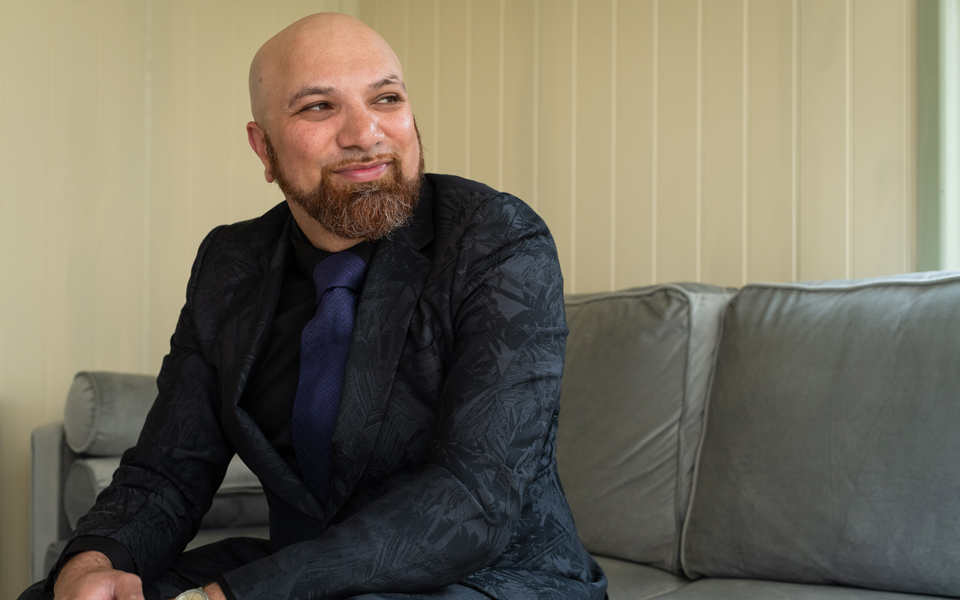 James Ram
I think the thing that broke my heart the most was when I was working in Skipton. I had a good friendship with the practice owner – we would go out for meals, I visited him in hospital. I once dropped him off one evening at his home after he had retired. His neighbours’ house was for sale.

I said ‘Oh, maybe I will come down and have a view.’ As he left the car, this man who had been my friend for so many years, who used to hug me at work, his words were: ‘I don’t think so. I don’t want a Paki for a neighbour.’ Then he shut the door and walked off. It really made me question who I could trust. At that moment, I realised that I had always been an outsider looking in.

The General Optical Council are big on continuing professional development and core competencies– from contact lenses to binocular vision. Why can’t we have a core competency for diversity training? It would not just benefit the staff but the ethnic minority patients who we treat. A lot of staff members have lived very sheltered lives; they might not have come across any Asian people before. Whatever their opinion is, it needs to change or be left at the door.

While I have been here in Devon, I have been very happy. Last week a member of staff made the comment: ‘You come here and take our jobs.’ He said it in jest, but I told him how racist it was – that is the language that the National Front used in the 80s and 90s. He was very apologetic, and I accepted his apology.

The senior manager at the place where I work, within half an hour of this comment being made, came to me and apologised on behalf of the company. I told him that I didn’t want it to go any further – the guy was nice enough and had said sorry. This manager still wanted to take action and put this member of staff through diversity training.

Why can’t we have a core competency for diversity training? It would not just benefit the staff but the ethnic minority patients who we treat

I thought that was amazing. I was really pleased that other members of staff who heard this comment were deeply disturbed and upset by hearing it. It was a relief to have them on my side. I’ve never felt anything less than part of the team there.

Racism is something that we need to move forward on. This week I have had a student shadowing me. When I spoke with her, a Muslim woman with a hijab, about her experiences, it was disturbing that she felt the same way I felt when I was at university. Decades have passed and nothing has been done.

There are plenty of white optometrists who say, ‘That doesn’t happen.’ But they have never experienced it. I cannot stress enough how much change needs to be made – from the top to the bottom. From the universities, to the GOC to the practices; my experience is just a fraction of it. This isn’t just me.

Many people from many different backgrounds are affected. I have seen colleagues face offensive comments, from a Hasidic Jew with distinctive dress to a practising Sikh who wore a turban. All forms of discrimination, whether related to race, religion, sex or sexual orientation, are abhorrent and should not be welcome within the world of optics.

I have two young children: a seven-year-old and a five-year-old. I am hoping they might go into optometry, because I love this field. I go into work with a spring in my step, but I don’t want to have to deal with this discrimination. I don’t want my children to have to deal with it – for people to think twice about their name or the colour of their skin. I want people to judge them by their character, how hard they work and the way they care for people.

I’m not worried about my kids experiencing racism because I have told them ‘If someone says something to you, you need to tell us. Your mum and dad will defend you.’ I wasn’t able to have those conversations with my parents growing up. We were focused on making ends meet – not having heating at home was a bigger issue than something a classmate said at school.

For people who have these experiences, don’t let it get you down. These comments can mean that you go home feeling disheartened and alienated, but there is nothing wrong with you. You should be proud of who you are. We’re not going to accept it anymore. At the age of 41, I’ve decided it needs to change.