Eyes 4 Everest is a charity that organises group volunteer trips to Nepal. On these trips, the volunteers get to not only provide optometric services to the communities, but they also go on a hike.

I did the Annapurna Base Camp trip. At the beginning of the hike, you take a longer way around and stop by some of the more remote villages where people have difficulties accessing eye care.

I have done volunteer trips before but what was really special about the Nepal one is that it was helping to connect existing services. We weren’t just dropping in and dropping off these glasses – we were linking people together locally. Glasses were often made by optometrists in Kathmandu and couriered back by the Sherpas.

Some people had walked for a day to meet up with us and get their eyes checked. There were people who were in their 60s or 70s getting their first pair of reading glasses

I really enjoyed hiking in Nepal. Part of it was the mental challenge – at some points on the trail you would see that you had to go up then down only to go back up again. Tourism is a large part of the income on the mountain, so I know that the Sherpas and the porters have had it quite tough after the pandemic.

What really amazed me was how healthy everyone’s eyes were. There were a lot of allergies – we had a stock of allergy eye drops on hand and a fair bit of dry eye, but generally there was very little pathology. We didn’t see much in terms of diabetes or high blood pressure. Most of the kids didn’t need a prescription. There was barely any myopia and if there was, it was very low levels. 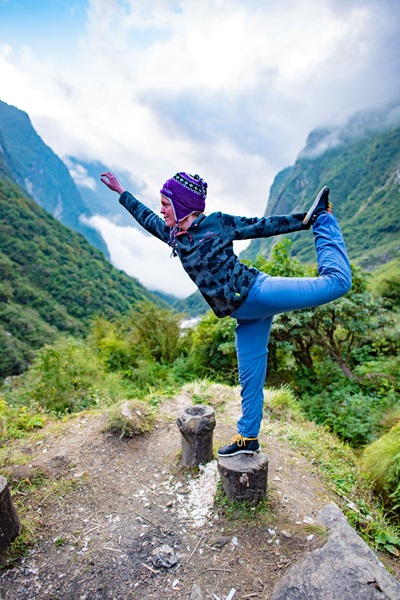 The first full day of testing that we did, we set up in the school. We tested school children first and then adults the next day. There were a few optometrists with us and there was also a dispenser. We were really lucky to have amazing porters with us. They not only helped to carry some of our equipment, but they also helped to translate.

The first day, I had one of the porters with me most of the time. We were testing school kids, saying things like ‘Open your eyes, look up, look left.’ After that I got pretty confident. The next day we had the adults and I was giving directions by myself.

I was getting a lot of strange looks. Then our Sherpa came in at one point and she asked ‘Why are you speaking like that to them?’ It turns out that this was a language where you have to address younger people and older people with different forms. I had been speaking to them like they were children and they were slightly baffled.

Some people had walked for a day to meet up with us and get their eyes checked. There were people who were in their 60s or 70s getting their first pair of reading glasses. When they put on glasses for the first time, being able to see things up close was amazing for them. There were big smiles.