“Hospital eye care has been a common theme throughout my career”

SpaMedica’s director of optometry, Christine Purslow, on her unexpected secret ambition and why she’ll always encourage optometrists to do that PhD

When I left school, I didn't know about optometry. 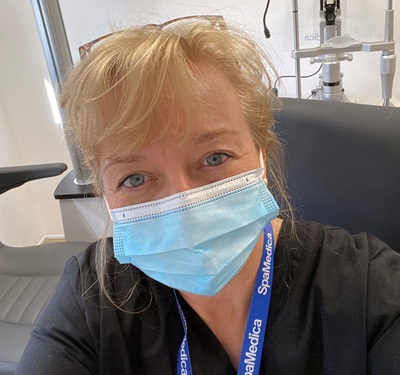 Christine Purslow
I went in a completely different direction: I got my A-levels, and became a management trainee for the John Lewis Partnership, in retail. I was set on a career in retail management. But the boyfriend I had at the time had decided to do optometry, and I thought, “I could do that as well. That sounds interesting.” So, that's where I got the idea from. I'd been doing retail management for one or two years. He was on the optometry course in Birmingham, and I decided to go and do it as well.

I was lucky, because I had an insight into what the course and the training was like. I did wear glasses, but it definitely wasn't my visit to the local opticians that gave me the idea. It was that personal knowledge.

I went to Aston in the late 80s, which was a brilliant time to be a student.

I have those friends for life; those shared experiences were the highlight of my time there. I really enjoyed being in Birmingham, and in fact I went back to Aston to do my PhD for that reason. I had good memories of the place.

We got sent for a two-week hospital placement to Newcastle, to the Royal Victoria Infirmary. We had a great time - so great that we got thrown out of our B&B. I guess that was a highlight, too.

I think anyone who does a stint in hospital sees another side of eye care, that is different to the High Street

I did my pre-reg at the Queen's Medical Centre in Nottingham.

That time was inspirational. I think anyone who does a stint in hospital sees another side of eye care, that is different to the High Street. I think that tends to shape what you do going forwards. The highlight there was probably working with Professor Martin Rubinstein, who was a brilliant mentor. I will never forget those times. When I look at where I am now, I've come full circle: back to my hospital roots. Hospital eye care has been a common theme throughout my career.

I stayed in Nottingham for a short time, but then I returned to Liverpool and worked for a small independent in the city centre and the Wirral.

I did that for about a year, and then I moved to Herefordshire and South Wales, and I spent the next 20 years of my life down there, including marriage and kids. In Herefordshire and Gloucestershire, I again mainly worked for independents.

In the mid 90s, when I'd been qualified six or seven years, I was doing part-time hospital and part-time teaching at Aston.

I was going back to Birmingham one day a week to supervise final year students in clinics, and I discovered I really loved that. At that time, the only way you could get to do more of that was if you did a PhD. So, in 2001, when I was in my mid 30s, I started a PhD. I think more people do that now, but I was an older postgrad then. I did my PhD at Aston with Professor James Wolffsohn, and that was great.

I finished the PhD in 2005, and then I went to Cardiff University, first as a senior lecturer.

Later, I introduced a postgraduate course for Wales Optometry Postgraduate Centre as the director of postgraduate teaching. I loved my time in Cardiff. I kept a link with hospital: a lot of my research projects were still involved in hospital optometry, and I'd take the undergraduate students on their hospital placements.

Then I went to the University of Plymouth, as the head of optometry, in 2012.

They had a new course, and I went to become their first head, but my family stayed in South Wales. As a family, we couldn't really move to Devon. So, I took a leap of faith, changed tack completely, and left teaching to join the pharmaceutical industry in 2013. I joined Thea Pharmaceuticals, and I was with them for about seven years as their head of medical affairs for UK and Ireland.

My role was split between France and the UK and Ireland, so did a lot of travelling, and I was still doing that when lockdown happened.

I think I get a seven-year itch. I loved the job at Thea, but I missed patients. I missed optometrists. I was in the land of ophthalmology, and I'm very comfortable with that environment, but I wasn't working with optometrists as much.

I joined SpaMedica in September 2020.

I think it was probably challenging for anyone who changed jobs during that time. It was a leap of faith anyway, as it is with any new job, but it feels like an even bigger leap when the world is fragile around you. But actually, the services that SpaMedica has provided throughout pandemic haven't changed, so in some ways it was quite a secure environment. Not only have I been working in hospitals, which are clean and safe, I was also in a service that definitely had a clear job to do.

My role as director of optometry has brought me right back to patients and optoms. It's more of a senior management role, certainly not an academic role, but the mentoring and coaching is quite similar in that now it's qualified optometrists that I look out for and help develop, rather than students. So, there are some common themes.

I'm really enjoying building a team at SpaMedica. It's such a lot of fun to have a big group of individuals and be recruiting new people. It's a very positive environment to work in, and it's very exciting.

The highlight of my career is definitely completing my PhD.

I did it at a time in my life when probably most people would have said, "Are you mad?" My children were five and three. It was a bit bonkers. But I just wanted to do it. I was lucky enough to have a supportive family that allowed and helped me to do it. No matter what career move I make, now or in the future, no one can ever take that away. Those letters are mine. When optometrists these days ask me about career advice and say they're thinking of doing a PhD, I always tell them to do it, even if they don't know what they want to do with it, because it will open doors. Everything I did after that PhD would have been a lot harder without it. To join the pharmaceutical industry, at the level that I did, would have been impossible.

I'd love to design handbags. I have a secret desire to design a wardrobe for a working woman that includes the right bag. If you entered the working world in the late 80s, it was easier to dress in a way. It was big suits, big hair, shoulder pads. It was clear where you were going. Now we're a bit more casual, it's really difficult as a senior female in the workplace. What do you wear? If I didn't do this, I'd probably try to do online retail, and at the heart of that is the perfect bag. I don't think I've ever found it, so I think I could design one.