“Setting a strong mindset is so important”

Yuan Gao, an international student from northern China, was unable to find a pre-reg placement by the time he graduated in 2020. Here he explains how he’s used the past year to his advantage

Can you outline your journey in optometry to this point?

I had always wanted to be a hospital pre-reg. I see a great potential for optometrists within the hospital eye service. There are so many things that optometrists have the potential to deal with, including glaucoma clinics, age-related macular degeneration cases, and triage.

I moved to the UK in 2016 and did a foundation degree, then afterwards started my undergraduate optometry degree at Anglia Ruskin University in Cambridge. During my second year, I realised that while we have the skills, we’re not always doing the things that we’re educated to do. In the future I want to tell younger optometrists how important we can be in the hospital eye care service. That’s the reason I wanted to be a hospital pre-reg.

I started looking for a pre-reg placement at the end of 2018, during my second year, and continued for the first six months of 2019. However, when I graduated in 2020 I hadn’t secured a placement – so I decided to apply for a one-year MSc in ophthalmology at UCL Institute of Ophthalmology instead. While completing my Master’s I became the course rep and set up the university’s Ophthalmology and Vision Sciences Society.

I worked on my Master’s dissertation over the summer, and finally secured a pre-reg, at Western Eye Hospital in Marylebone, Central London, which I started in mid-August.

Mental health is so important. If you need help, ask for it

Could you explain the problems that you had finding in a pre-reg placement, and how you felt about them?

I started applying for pre-reg placements at both High Street practices and hospitals in the second year of my undergraduate degree, with a focus on hospitals.

I was rejected time and time again, sometimes without having an interview. One hospital told me they couldn’t help me with a visa or provide sponsorship for international students, and another because, as a second year, I didn’t have enough knowledge for the hospital pre-reg position. Some other hospitals didn’t give feedback. 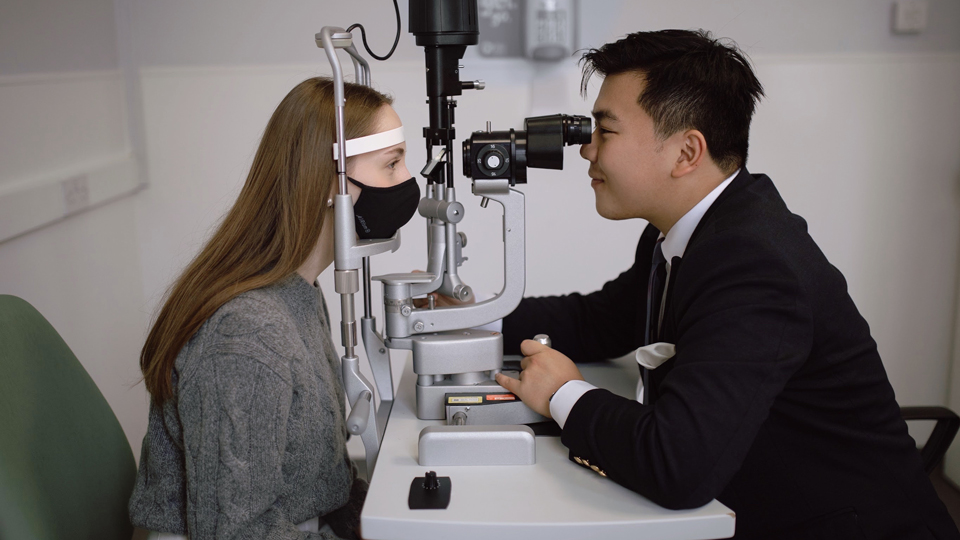 Laurie Daria Augustyn
It’s really frustrating to get tonnes of rejections. I started doubting myself: whether my choice was correct, whether I was actually going to become a hospital optometrist. That’s when my anxiety began.

I started applying for hospital pre-reg placements again this year, in the middle of my Master’s. Because of the pandemic I found that the previous cohort of pre-regs hadn't finished, so some hospitals were not taking on anyone new for 2021 to 2022. There were only very few hospitals, at the time I was applying, that were recruiting pre-reg hospital optometrists.

I applied to two, and I got rejected directly after the application by one. I then interviewed for the second, and got rejected again. I got really frustrated and anxious after that, and started doubting myself again.

How did you turn that disappointment and anxiety a positive, with your master’s, being the course rep, and setting up the Ophthalmology and Vision Sciences Society?

At the beginning, I didn’t have a choice. I didn’t have a pre-reg guaranteed, so if I didn’t do the Master’s I would have had to go back to China, because my visa was expiring. The only choice I had to keep myself in the UK was to apply for another course.

Luckily, I’d wanted to apply for the Master’s for a long time. I already knew the people who were teaching and the lecturers. They were really nice to me, and they encouraged me to apply.

At the time most of my classmates, even if they had a pre-reg guaranteed, weren’t starting straightaway, because of the delay from the 2020 cohort. From July 2020 onwards, when they started really depended on when the previous cohort qualified. I had the mindset that I should use the time to apply for a Master’s degree in something I was interested in, instead of waiting for a potential pre-reg. I’m the kind of person that if I have idea, I will just make it happen. I think setting a strong mindset is so important.

Did you make a conscious decision not to apply for any pre-regs whilst the pandemic was at its peak, or was that not really related?

The pandemic really affected my decision. I’d wanted to do the Master’s after I’d qualified, but the pandemic happened, and I knew I wasn’t going to start a pre-reg immediately. So, that’s why I applied.

At the beginning of 2021, the pandemic was affecting my mental health a lot too. The fact that there were only a few hospitals offering pre-reg placements caused me real anxiety.

Did you have support when you were going through this?

The AOP’s pre-reg register was helpful. I posted my personal information, and I was contacted directly by potential employers as a result.

I got lots of help from UCL, especially my lecturers. We were a small class, with only 20 students. All the lecturers were so helpful. They don’t only take care of our studies and how much we learn; they also pay attention to mental health. One of my lecturers is in contact to see how I’m feeling and whether I need any help, and emphasising that I should feel free to give them a call if I need to. They are all in the industry, working in hospitals, so they know how difficult everything is. They have given me a lot of support, which I've benefited from.

The other help I got was from the Imperial College Ophthalmology Research Group, where my UCL personal tutor worked. She brought me in as a graduate research assistant at the most difficult time, when I felt very anxious about what I was going to do in future. She put me on one research project, which was a welcomed distraction. I helped with that for about three months. I really enjoyed working there; it distracted me from being anxious.

That research group won an award, which is a great achievement. Did you feel like that that was a bit of positivity amongst the challenges you were facing?

It was. At the time I didn't know that I could actually do lots of things, as a graduate. I thought, when I'd graduated from university, that I couldn't do anything without being qualified. But when I was helping the research, I was doing most of the data collection - checking the intraocular and blood pressure, doing the OCT, checking people's vision; all the tests that I had learnt at university. Before that, I didn't know I could do all these things with supervision, without being qualified. When we won this award, I realised that as an optometry graduate you can do so many things.

We have such great potential in optometry. We can do research, we can do primary care, we can do hospital eye service. Winning the award allowed me to reflect on the fact that there is so much scope for the future.

How did you eventually find your pre-reg placement?

While I was working as part of the research group, the project director was impressed with my learning abilities and skills. He suggested to my UCL personal tutor that they could potentially help me to secure a pre-reg placement at Western Eye Hospital, which, like the research project, is also part of Imperial College Healthcare NHS Trust. They then worked to effectively mould the hospital’s first pre-reg course, which I have now started.

Your pre-reg placement has been effectively invented for you. How do you feel about the fact that there’s now going to be an extra opportunity for graduates coming onto it in the future?

I’m really proud. I like to pioneer things. I want to tell people that, in the hospital eye service, we not only have ophthalmologists, we not only have doctors, we also have optometrists, orthoptists, nurses, technicians – we have everyone. That’s why I called the UCL society the Ophthalmology and Vision Sciences Society, to incorporate everyone.

Now, I’m doing the first pre-reg placement at Western Eye Hospital. I’m so proud of it. I want, during my pre-reg year, to use the opportunity to show future optometrists that we are a profession that can play an important role in a hospital. I’m proud to be the first pre-reg in one of the best eye hospitals in London. It’s something I’m really looking forward to. I believe this placement will benefit me a lot when I qualify.

What would you say to other people who might be struggling, whether because they haven’t got a pre-reg, with their degree, or just in general?

If you’re waiting to start your pre-reg and you've got free time, use it. I used my time to do my Master’s degree

Getting optical experience is important whilst being a student, but you really need to make sure it’s relevant. Contact the hospital, ask the doctors or optometrists if you can sit with them in a clinic, or go into a High Street practice and ask the same thing. This really will benefit you later, in your pre-reg year, or even when qualified. You can learn a lot from observing.

For people who haven’t got a pre-reg placement, I’d say to keep calm and carry on. Things will come if you work hard. Try not to be too stressed. Mental health is so important. If you need help, ask for it. You can ask for help from the AOP or the College. The worst thing is when you need help, and you don't ask. If you’re struggling, let people know. There are always people who will help you.

If you’re waiting to start your pre-reg and you’ve got free time, use it. I used my time to do my Master’s degree. Think about how you can make that time work for you, instead of wasting it. That’s my advice for students who haven’t got a pre-reg. Also, prioritise your mental health – it’s so important.

Have you overcome hurdles while studying optometry or working in the sector? Share your story by emailing [email protected]

More Against the odds