Patient Kath Brookes (KB): I woke up on New Year’s Eve and my head felt like lead. It was really, really heavy and I could feel that something was not quite right. I thought to myself – ‘Am I having a stroke?’ But I didn’t have any of the typical symptoms, except for this feeling in my head as if I was being dazzled by a torch.

I was bubbled with my daughters, who weren’t happy about how I was feeling the next day, so one of them took me to the local hospital. They were brilliant and did all the tests and said that I hadn’t had a stroke, and must have a virus. They told me to go home and take some paracetamol.

By the Monday morning I was still feeling the same and my legs felt like jelly. My other daughter took me to her doctor who did tests and also said I hadn’t had a stroke and I might have picked up a virus. My daughter works in healthcare and so she decided to take me to Specsavers to take a look behind my eyes.

KB: Leanne did all of the tests and I had the scan behind the eyes. She spotted some anomalies in my peripheral vision and told us that she didn’t know what was wrong but that she wasn’t happy with the symptoms I had described. She told us: “I won’t leave it until I find out what’s wrong.” She was so very thorough and referred me to York Hospital.

Within a couple of days, maybe even the next day, the hospital rang to tell me I could go in and be seen. I really think I have her to thank, probably for my life. If she hadn’t got me to the hospital quite quickly, I don’t know where I’d be now. 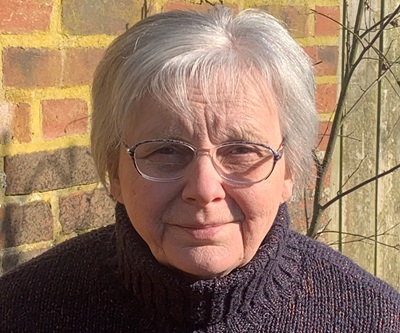 KB: Because I had already been told by my doctor and the hospital that it wasn’t a stroke – I was quite sure I hadn’t had a stroke.

At the hospital I had a scan and they said that, yes, you have had a stroke. I needed to be put on blood thinning medication.

I’ve seen the Act FAST television adverts and my face didn’t alter, there was nothing physical except for feeling a bit jelly-legged. I was so sure when I went to the hospital that I hadn’t had a stroke, so it was a big shock. But then, I feel that a stroke is a big shock to your body. Even though it was a little stroke – it left me feeling as though my body was shocked. I was in hospital, they stopped me driving for a while and they say I’ve lost some peripheral vision in the top left-hand corner. They also explained that it was probably linked to sleep apnoea, so I have to use a machine at night.

KB: I always thought sight tests were very important. All my family, even the grandchildren have had an eye test. My mother has been going to Specsavers for years, she’s had a corneal graft and she turned 92 this year. It’s so important. You don’t realise until there’s something wrong with your eyes, how important it is to you.

You don’t realise until there’s something wrong with your eyes, how important it is to you

How has the experience changed your life or affected you?

KB: If it hadn’t been for my daughter taking me to Specsavers, and Leanne, I would’ve just followed the doctor’s advice and done nothing about it. I’m very grateful.

I had no idea that eyesight was anything to do with a stroke. But of course you hear about these things after they happen to you. My mum’s next-door neighbour told me had a little stroke and lost his eyesight for a few days completely and it came back. Speaking to my aunt, I found my uncle had exactly the same as I have, about 25 years ago – the same feeling as though you’re being dazzled. I’ve come across one or two more people that said the same thing.

I really think it needs to be brought to people’s attention that this can be part of a stroke, because I had never heard of it having anything to do with eyesight before. I knew all about the limb weakness and the face falling, but never anything to do with sight. I think other people ought to know, because if I had known that I would have been straight to the doctors.

How has COVID-19 affected your practice? How did you adjust your services to be able to meet the needs of your patients, such as in this case?

Leanne Ellison (LE): Initially, COVID-19 had a significant impact; we had to close our newly-opened practice, but as lockdown changed, we reopened and were prioritising patients with essential and emergency eye care issues. We have always focused on providing the best clinical care we could, and COVID-19 didn’t stop us doing that.

We have been using full personal protective equipment throughout the pandemic, and rigorously cleaning between patients. We have also been encouraging many of our patients to have the optical coherence tomography (OCT) scan so we can get a much more in-depth check of the eye whilst trying to minimise the time spent in the test room.

LE: Kath initially presented with a few strange symptoms – a constant shimmery effect in her peripheral vision that she had noticed for a few weeks, and she had just been feeling ‘wrong’ within herself. Her visual acuity was great (6/6 R&L) and her eyes appeared healthy, with no obvious issues. However, when we carried out a visual fields test, it showed a repeatable visual field defect which did concern me along with her symptoms, but it allowed me to refer her quickly and investigate what was going on.

I explained there was a portion of her vision that was missing, so this could be a sign of something more serious

How do you approach explaining what you had identified or suspected?

LE: Informing a patient that you need to urgently refer them must be done with compassion and empathy, but at the same time, we have a duty to make them aware of the urgency and seriousness of the situation.

I had already explained to Kath and her daughter during her eye test that, given her symptoms, we needed to investigate further, which meant that we needed to refer her. Then, after her visual field defect was identified, I explained there was a portion of her vision that was missing, so this could be a sign of something more serious than just a virus as her GP and A&E had suspected. Both Kath and her daughter understood that something could be wrong and the severity, but they were just very grateful that we were able to do something to find out what was really going on.

LE: I swiftly sent a referral letter directly to the hospital, which included my findings, and a copy of the visual fields test results. As a result of us sending this letter direct, the ophthalmology team were able to triage it and ask Kath to come in to see them within a very short time, meaning the cause of her symptoms was identified quickly and no further damage was caused. She is now, in time, expected to make a full recovery.

LE: Shortly after referring Kath, her daughter kindly called me with an update and to express her gratitude. Kath also came in to see me for another check-up a few months later when her symptoms had resolved, which was so reassuring and great to see her feeling more like herself. She still has the visual field defect, which the hospital is monitoring.

What would be your three top tips to other practitioners when making a referral, either generally or during COVID-19?