“I told dad that this wasn’t something we could ignore”

When pre-registration optometrist, Victoria Begley, called her father after work for a chat, she was not expecting the call to lead to an urgent referral

Before you spoke to Victoria, had you experienced any symptoms and how had this affected you in day-to-day life?

Patient, Derek Begley (DB): For around two days prior my vision had been blurred, but it wasn’t too bad and when I got up in the mornings, I found it cleared. On the Thursday, the symptoms were there straightaway and stayed for quite a while. As well as the blurry vision, my eye became very painful. It was the kind of intensity of a migraine headache in my eye.

I had been off work and so I went back to sleep, but when I woke up, it was still really sore and became more intense as the day went on.

What did Victoria suspect, and what was found at the practice?

DB: Victoria rang me on the way home from work, as she usually does, and I told her that I had been getting pains in my eye. Victoria went through a few questions about my vision and some tests. She asked me to look at the lights, and I could see halos around them, and she also asked me to look at different colours, and I felt the colours were changing.

Victoria told me, “I think we need to go and get this checked out straightaway.”

Victoria suspected it could be angle closure glaucoma. This was confirmed in the practice with the optometrist, and Victoria then rang straight through to Warrington Hospital to get me to go to the hospital to have it sorted.

How did the optometrist explain the next steps to you? Can you describe how you felt during the referral?

DB: I felt fine because if Victoria said I needed to go to the hospital, then that was where I needed to go. I felt really safe and secure.

She explained that they would need to lower the pressures and that I would probably need to go back the next day for some more treatment. I’ve been used to having all sorts of treatments with my heart recently, so I’m quite used to being in hospital and I felt fairly comfortable and safe. I had every confidence in Victoria.

DB: We went to Warrington Hospital, where the ophthalmologist gave me some drops to dilate my eyes. He then put me on the slit lamp and put another lens on my eye to have another look. He put some fluorescein in and checked my pressures on the Goldmann.

Then I was laid on the bed and they were putting drops in about every 10 minutes to try and get the pressures down. They checked again and my pressures had come down, so they said I would need to come back in the next morning for the YAG laser treatment.

When I first went into the hospital, I could see quite a bit, but the next morning I felt very light sensitive and everything was blurred. I could only see hand movements. They tested my eyes again and the pressures hadn’t come down any further.

They then did a YAG laser treatment and put an intravenous drip into my arm, which brought the pressure down.

I was on drops and tablets afterwards, and have been using the drops since. My vision has improved quite a lot now. It hasn’t gone quite back to the way it was so I’m going back with a view to getting my lens replaced.

DB: I’ve always taken my eyes seriously because I’ve had contact lenses for quite a few years. I always get my regular check-ups and my glasses changed. Since this experience, it has become of the utmost importance to make sure I do attend all of my appointments all the time. I normally do anyway, and it was only because of COVID-19 that this has lapsed.

If I had left it until the next day, which I would have had it not been for Victoria, I could have lost my sight in that eye.

Victoria is a hero. She takes the job so seriously, is always studying and going the extra mile and always has done.

I felt this was a bit too typical of angle closure glaucoma. I thought perhaps I was just thinking of the worst case scenario, but that it would be better not to leave it until the morning to check

What did you identify during your conversation, and how did you approach explaining what you had identified/suspected?

Victoria Begley, pre-registration optometrist at Cheshire Oaks Specsavers (VB): I was speaking to my dad on the way home from work to ask how his day had been and he told me that his right eye was a bit sore. He had mentioned before that his eyes had felt a bit dry, and because he has a few different medications, I thought it could be a bit of dry eye. But he explained more and said that his vision in the affected eye seemed a lot dimmer than the other. 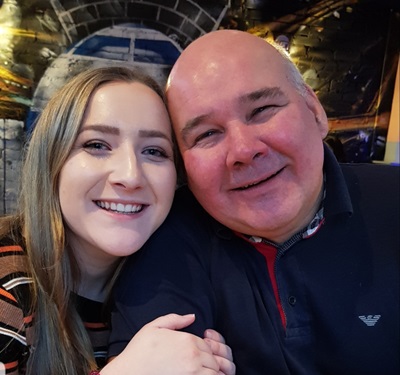 Derek and Victoria Begley
At first, I wasn’t sure if it was swelling on the optic nerves, but I asked him to look at something that was the colour red, which can appear a bit pinker for an affected eye, but he said it was a dark red.

I asked if it was better or worse in dark rooms, and he told me that he was quite light sensitive, and his eye eased in a dark room. I asked my mum to look at his eye and describe it, and she explained that it was very bloodshot.

I always teach my parents about their pupils, so I asked whether it looked small or large, and she told me that it appeared to be slightly bigger than the other pupil.

I asked them to look at a light, and he said he could see a ring around it. He had mentioned his vision was blurry, so I asked him to describe this and he said it was cloudy.

After talking through those points, I felt this was a bit too typical of angle closure glaucoma. I thought perhaps I was just thinking of the worst case scenario, but that it would be better not to leave it until the morning to check.

I was working at Ellesmere Port that day, and called my supervisor, Ellie, who told me to check it out and see what I thought. I used to work in Runcorn and I still know everybody there, so I rang the practice to let them know I was coming in because I felt we needed to check it out quickly.

How was this confirmed at the practice and what was your reaction?

VB: At the practice my old supervisor and the senior optometrist at Runcorn, Stuart, confirmed my suspicions.

We popped him on the slit lamp to have a look and when we shone the light on his eye, his pupil didn’t move whatsoever. It was really quite bloodshot, and I could see that the cornea was cloudy, so it was actually hard to see into his eye. I tried to measure his angles and thought, “There is just no angle here.”

Having my suspicion confirmed, I slightly panicked at first but put a bit of a front on and told dad that this wasn’t something we could ignore and would need to get it checked at the hospital.

VB: It was one of those moments when you are sat behind the slit lamp thinking, ‘How on Earth am I going to say this to someone?’ It took me a minute to run it all through my head, but then the adrenaline kicked in and I knew I just needed to get going.

My parents know quite a bit about eyes already because I’m always talking about it, so I felt I could explain a little more to him than I might normally with a patient.

I explained the drainage angle, pointing to a diagram in the room and giving the analogy of a sink with water constantly flowing through and draining away through the plug. If you block up the plughole, the water is going to keep on filling, and I explained that this was similar to what was happening in his eyes. The fluid was not going anywhere and causing pressure to build up in the eye. I explained that we don’t want the pressure to be too high because it can cause a bit of damage.

It was one of those moments when you are sat behind the slit lamp thinking, ‘How on Earth am I going to say this to someone?

VB: It was a bit easier to explain the situation to him, as my dad, but also harder, because you panic more because you have that connection.

There wasn’t really time to write a referral letter, so I handwrote a letter. I then rang through to the Warrington Hospital switchboard and was put through to the on-call ophthalmologist who I explained everything to, and they told me to bring him in. Because he had the letter, when dad arrived at A&E they rang the ophthalmologist straight away.

VB: Dad attended the hospital and received eye drops to take over night. When he went back in the next morning he was seen straight away. As soon as they realised his vision had dropped, they got the consultant, who was a glaucoma specialist, to look at his eyes and make sure there wasn’t any blood in his eye. That was fine, so they took him to have the treatment and by 9:15 he had the YAG laser treatment done on both of his eyes. There was no messing around, which just showed how quickly it needed to be done.

We’ve seen that his vision has almost come back to the level it was. Considering that he couldn’t see a screen at one stage, never mind anything else, it has improved a massive amount.