“When I received the email to tell me that I could help with the vaccinations, it just felt right”

How are optometrists in Wales involved in the delivery of the vaccination programme?

Sali Davis, chief executive Optometry Wales (SD): I think it's fair to say that the Welsh Government have been quite agile in terms of the inclusion of optometrists, dispensing opticians and practice staff. From the start, we had agreed a service specification which would include pharmacists, optometrists, dispensing opticians, and dentists to work alongside GPs in the mass vaccination centres if they wanted to. There was also talk at one point about delivery within optometric practice. That hasn't happened yet and there are still plans that are being discussed and talked through.

At the moment, we have got probably about a third of our workforce, which is made up of about 900 optometrists and dispensing opticians in total, out there in mass vaccination centres. We also have some of our practice staff helping out with the administration, such as in the call centres, helping with the paperwork and appointments.

What has been involved in establishing this?

SD: Before they can deliver the vaccinations, optometrists have to complete an online training course which takes around half a day. That's really the only requirement that they have had to meet, other than registration with the individual health boards.

We have seven health boards across Wales; to date, five are using the profession within the mass vaccination centres and two are ready to come on board. Those two are in quite rural areas, and we found that many GPs in those areas haven’t set up mass vaccination centres as they've been going out to houses and delivering the vaccines themselves. So, coverage hasn't been needed in the same way as it would have been the bigger urban areas.

What do you think it means for the profession to be able to take on this role?

SD: Throughout COVID-19, Optometry Wales has been involved in weekly negotiations with the Welsh Government about a contract for the profession in Wales. It was always the intention of the Government to try to use this opportunity to showcase the skillset that optometrists have, and they have been able to do that.

We're now talking to the Welsh Government about the future contract including a requirement for the profession to deliver flu vaccinations in practices. We think that we might have to have annual vaccinations for COVID-19, so those are also happening alongside.

It has been really great that we've been able to mobilise the workforce to deliver the vaccinations, prove that we can do it safely and effectively, and to have that discussion with Welsh Government alongside it.

We had talked tentatively around it before COVID-19 even hit. This presented the opportunity and gave the Welsh Government the mandate to have those conversations with the policymakers in charge of delivery of the vaccination programme in Wales.


We have got about a third of our workforce, which is made up of about 900 optometrists and dispensing opticians in total, out there in mass vaccination centres

SD: The response has been really encouraging. It's been lovely to see lots of emails and interest from people wanting to help. What we saw before the vaccine was available in Wales was that the profession was really keen to go and volunteer. We had set up with pharmacy colleagues a schedule whereby our optometrists could help deliver medicines to people who might be shielding at home. I think that was a really nice opportunity for the profession to get involved in a volunteer role and it allowed them that insight into the wider NHS infrastructure. I think I saw the same people who were volunteering, wanting to deliver the vaccines, because they could see how safe and well administered that programme was delivered, which helped inspire a bit of confidence. The opportunity is very much open, and it has been lovely to see everyone getting involved.

What have been the biggest challenges?

SD: It has been quite a smooth process. One of the struggles had been that, while the national message was that optometry was to be included in delivering the vaccine, the local message from within health boards hadn't quite filtered down. That just required a conversation, sharing the service specifications and making sure that all the communications were in the right place.

If you wanted to deliver the vaccine you had to send your expression of interest to a generic email address, and I had thought that perhaps emails would be lost. One of my concerns was that, having galvanised the profession and encouraged them to do the online training, we wanted to make sure that the service was ready for them. I was nervous, but it seems to have been a smooth process.

How has optometry’s involvement in the programme affected the wider community?

SD: I think, as a patient, to see your optometrist delivering the vaccine is wonderful. A lot of the feedback we’ve had from patients has said what a great experience it was and that they were enjoying the opportunity to see their GP or optometrist.

I think one of the really lovely outcomes has been the support we’ve received from GP colleagues. We have received comments from GPs who have worked alongside the profession sharing: “It was great to see our optometry colleagues.” It has been a lovely piece of collaboration, with genuine respect between NHS contractors and with stakeholders that we work with, like the Chief Medical Officer for Wales.

What has been your key takeaway from this programme?

SD: I have been pleasantly surprised at how supportive the primary care colleagues have been. I think it has been the perfect opportunity to show that we want to help and stand alongside GPs, pharmacists and dentists, and deliver this work. I wasn’t expecting the profession to have been embraced as much as we have. Everyone has mucked in and I think that is going to be so helpful for us.


I had my shadow shift and then worked my first shift. It was completely out of my comfort zone, but I had a great sense of achievement

What made you want to get involved in the vaccination programme?

Haverfordwest Specsavers optometrist, Angharad Bowie (AB): I was lucky enough to work throughout the pandemic for emergency and essential appointments. It was nice to be able to work, but I also wanted to give something more back to the NHS. I think the NHS has always been amazing, but especially during the pandemic. When I received the email to tell me that I could help with the vaccinations, it just felt right. I work in eye care every day and I'm passionate about helping people, so I thought it was amazing opportunity.

What did the training involve?

AB: The training process was quite daunting as I had never given a vaccination before. All of the training was online, apart from one morning which was on manual handling and piercing. It was lovely as it gave me a chance to meet a few other people who were signing up to the programme.

There were around eight or nine modules online and once you had completed a module, you took a short multiple choice exam. Then we had a shadow shift. I was assigned to a nurse who I watched give the vaccinations and she was providing a great level of detail. She watched a me do a few and then there is an assessment where they sign you off. It was amazing; the nurses at the vaccination centre were really welcoming.

AB: I had my shadow shift and then worked my first shift. It was completely out of my comfort zone, but I had a great sense of achievement. It was amazing to work alongside all of the nurses who have been giving the vaccinations from the beginning, and they were really helpful and friendly. There were always people asking if you wanted any help, and there was a really nice sense of community. There is a co-ordinator on each shift so if you have any questions, there is always someone you can ask. It was a bit nerve-wracking at the start, but once I got into it, my nerves disappeared.


I think there is a compassionate side of optometry that you have to have, and being used to helping people feel at ease has really come in handy when giving the vaccinations

How do you think your skills in optometry might have supported you in this capacity?

AB: I work at a very busy practice in town and I'm used to interacting with, and helping, patients. I’m particularly used to dealing with people's fears and anxieties in an optometry setting. In a vaccination scenario, people can be even more scared as many don't like needles.

I think there is a compassionate side of optometry that you have to have, and being used to helping people feel at ease has really come in handy when giving the vaccinations. I found a good tactic is to just get them distracted by getting them talking. 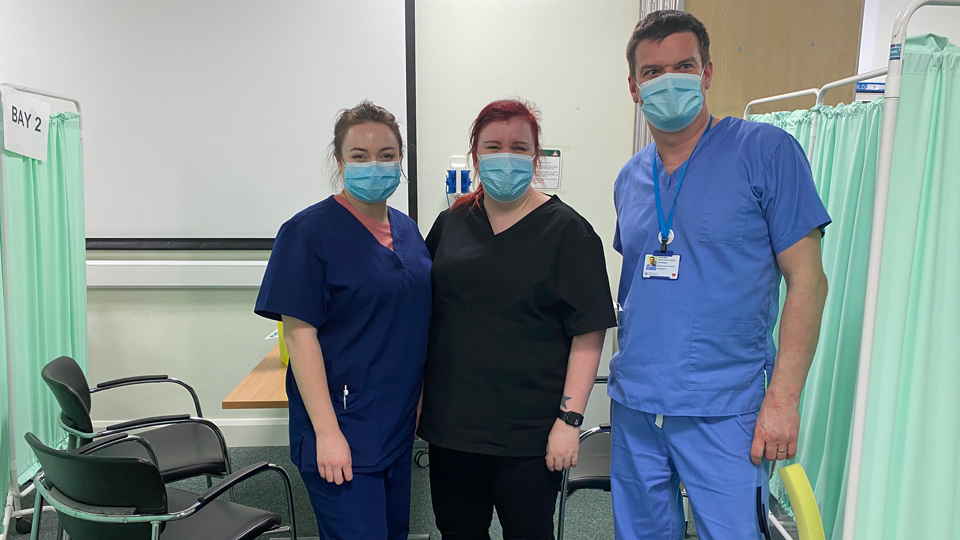 Angharad Bowie with practice colleagues at the vaccination centre

Have any experiences stood out to you from your shifts?

AB: My first experience of giving the vaccination was funny. I watched the nurse give a few before it was my turn. The first patient that came around the corner was one of the mums that I see quite often in the practice and I have tested her little boys. She was really excited to see me and said, “I can't believe you're here.” I was seeing customers and patients that we haven't seen for so long and they were all so grateful.

My boss, Andy Britton, and my manager, Kate Hooper, who is a dispensing optician, also signed up to help. When I arrived for my first shift, Andy was already there, and then Kate arrived later on. We were all in the same bay and could see each other. When I gave my first vaccination, Andy came over to congratulate me. I started working for Andy as a Saturday girl when I was 16 and he has seen me go away to university and come back. I think for all of us it was an achievement, and we were just happy to be involved.

What will you take away from this experience?

AB: I think the NHS does an incredible job and I've always really appreciated that. Now, more than ever, I really appreciate the hard work and commitment that goes into the NHS and all the people who are working behind the scenes.

I have personally felt a great sense of achievement. I find that people believe optometry is quite regimented or limited. But this just proves that with optometry, you can do anything. I think it has broadened my mind outside the test room. It is really nice to be able to give something back and, I think that's the way healthcare will go. It will keep opening up those doors.