The impact of self-isolation requirements for practices

“From Sunday boy to optometry student”

Optometrist and director at the Hakim Group practice, Eyecare Excellence, Elysia Harvey, reflects on the pathology and protocol benefits that the Optomap brings to her business

Working in practice at the current time presents many challenges, so to have technology at your disposal that not only gives you confidence in the decisions you make, but also adds that extra level of reassurance in terms of social distancing, is so important.

The first time I used the Optomap was when I joined Eyecare Excellence in 2019. Coming from a multiple, joining an independent practice was really exciting, and knowing that the practice had an Optomap was a big plus for me.

Operating single testing at Eyecare Excellence means you cannot ask a colleague for that valuable second opinion. Therefore, when necessary, my optometrist friends from university and I consult with one another on clinical decision making. To do this, I often send across Optomap images and my peers are always impressed by how wide the view of the fundus is when captured by this state-of-the-art technology. It’s fair to say that they are quite jealous of it.

To have technology at your disposal that not only gives you confidence in the decisions you make, but also adds that extra level of reassurance in terms of social distancing, is so important

A league of its own

In a practical sense, the Optomap is in a league of its own. Put simply, it gives you a wider image of the retina than any other piece of optical equipment. The pathology it picks up is really helpful; the red (choroid) and green (sensory retina) channels enable the user to generate different images to distinguish between the deeper retinal layers and those closer to the surface. This is invaluable when determining where the pathology lies and can then enable the clinician to fine tune the cause of a lesion and its associated pathology or physiology.

Furthermore, the autofluorescence image captured by the Optomap helps me to ascertain the functionality of the retina. It can identify retinal pathology in its very early stages before we see changes on the coloured (structural) image. Early retinal degeneration, or areas of retinal ‘stress,’ are highlighted by hyperfluorescence on the image. This reduction in metabolic activity precedes retinal cell atrophy, which is then identified as dark areas (hypofluorescence) on the image. Identifying these stages enables early detection of age-related macular degeneration. Furthermore, studying the bandwidth of hyperfluorescence around an area of hypofluorescence can give an indication of how rapidly the disease is expected to progress.

The other tool of autofluorescence imaging that gives me clinical confidence is the hyperfluorescence of vital pathology indicators, such as optic disc drusen. This can provide optometrists with important clinical pearls when differentiating between congenital optic disc drusen, which is a normal finding in practice, as opposed to optic disc swelling, which in itself is an ocular and medical emergency. Similarly, the highlighting of lipofuscin can aid diagnosis between benign naevi and malignant choroidal lesions. 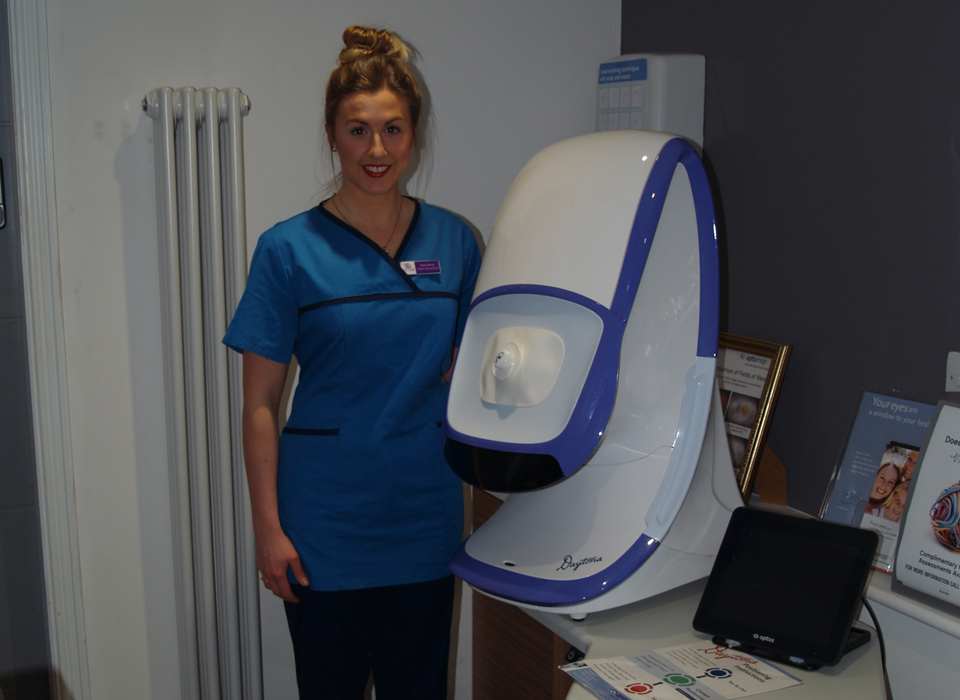 Elysia Harvey with her Optomap
Optomap’s strength lies with its ability to view 82% of the retina in a single, half a second capture. This ultra-widefield view can be extended to the ora serrata with simple instruction to eye-steer a patient, providing the view of a certain retinal sector.

Early peripheral degenerations can be routinely identified, guiding a practitioner to discuss retinal detachment signs and symptoms with their patient, in turn reducing the number of ‘missed’ retinal detachments in the future from lack of patient education.

Being able to image the ora serrata gives me greater confidence when a patient presents with flashes and floaters. As well as a dilated fundus view with a Volk lens, having the actual image gives me an extra level of reassurance to be able to rule out a retinal tear or detachment.

Optomap’s strength lies with its ability to view 82% of the retina in a single, half a second capture

The great thing about being an optometrist is that you’re constantly learning, and I think being part of the Hakim Group really facilitates that. I’ve taken part in a trio of Optomap webinars, which form part of the HG Academy, the group’s development programme. These webinars have been run by optometrist Simon Browning, an expert in the field and a fellow member of the Hakim Group, who was the first person in the world to use Optos autofluorescence imaging in practice. It’s no surprise then that I’ve learnt a lot from him on how to get the best out of the Optomap technology.

Furthermore, Simon is in the process of setting up a platform to allow Hakim Group optometrists to share images of anything that we’re unsure about with him – you can’t get much better support than that.

In the context of the situation that we now find ourselves in with the COVID-19 protocols, the Optomap really comes into its own. The fact it is able to give you a view of the whole back of the eye without getting too close to the patient is really helpful. While we have protocols in place in practice to protect both staff and patients, we still want to limit close contact with patients as much as possible, and the Optomap provides that while also allowing you to see pretty much everything.

Coupled with the pathology benefits, the Optomap is something that I would definitely miss if it were not there, especially at a time like this.