Remembered as “one of UK optometry’s unsung heroes,” Andrew Field died on 30 December 2020 at the age of 81

Optometry Today is sad to announce the death of Andrew Field, described as an esteemed member of the profession, who contributed greatly to its development and was “one of UK optometry’s unsung heroes.”

“Born 7 July 1939, Andrew grew up in Wansted, East London. He attended Northampton College of Advanced Technology (NCAT, now City, University of London), and graduated with a degree in Ophthalmic Optics in 1960, qualifying in 1961. He was later awarded an MSc in Visual Science from City University.

“Andrew joined John Sheinman, whom he had met at NCAT and who had acquired the AE Turville practice in Northampton, as a contact lens consultant in 1964. In 1967 he obtained his first practice in Leytonstone, and a further one in Chingford in 1974.

“Andrew was renowned for his sense of humour and contagious laugh. He was proud to tell the story of being thrown out of a cartoon cinema at Waterloo for laughing too much.

“In addition to being an excellent clinician, he had a wonderful talent for teaching in a very relaxed and clear manner. He trained many pre-registration optometrists over the years, including Ken Pullum, while also providing early career tutelage to recent graduates such as Jan Bergmanson. 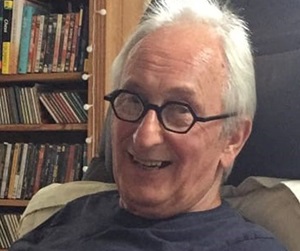 “Andrew taught one day a week in the teaching eye clinics at City University for over twenty years, until the late 1990s.

“He also had a radical side to him. In the late 1970s there were moves to change the title of the profession in the UK from ophthalmic optician to optometrist. This had been led by the late Professor Robert ‘Bob’ Fletcher who, against some stiff opposition from the professional bodies at the time, had changed the title of the department at City University to the Department of Optometry and Visual Science.

“In 1979, encouraged by Bob Fletcher and the late Professor Gerald Dunn, he co-founded the British Association of Young Optometrists, along with a small group of other like-minded young optometrists. The aim of this ‘ginger group’ was to push for change. At the inaugural meeting, Andrew agreed to the constitution that members had to be under 40 years of age to have voting rights, and at this ripe old age he immediately became an honorary member.

“He served a three-year term as an elected counsellor of the College of Optometrists, and was a Fellow of the American Academy of Optometry from 1970 to 2001. He was a longstanding active member of the British Chapter of the Academy, along with Judith Morris, Rishi Agarwal, the late Nevile Robinson, and Norman Cohn. For a number of years, he served as President and Honorary Secretary of the Chapter, for which he was recognised in the USA with the prestigious Eminent Service Award (recently renamed the Tony Adams Eminent Service Award) in 1999.

“In 1995, with Nigel Burnett Hodd and Simon Barnard, he attended the concentrated ocular therapy course at Pennsylvania College of Optometrists (PCO), at a time when contemporary advocates were calling for a change of legislation to enable optometrists to be therapeutically licenced in the UK.

“The training and adaption of the PCO syllabus assisted in the subsequent development of therapeutic modules as part of the MOptom degree at City University, helping the progression towards the Independent Prescribing status now available to optometrists.

“He was active in the development of computer-driven sight test charts for consulting room use, and online vision screening tests, amongst other innovative vision testing equipment and methodology, co-founding EyeLab Ltd in 1990.

“Andrew was kind and generous throughout his life. He created and maintained, pro bono, the website of the Institute of Optometry until very recently.

“He retired to Woodbridge in Suffolk, but his love of optometry led him to buy a small professional practice in the town, where he continued to practise for some years.

“He was a great supporter of the performing and visual arts, and was a competent stone sculptor. If Andrew had an anthem, it would be Monty Python’s ‘Always Look on the Bright Side of Life.’

“Andrew was much loved by his family, friends, colleagues and patients. He will be missed greatly.”

Andrew Field died on 30 December 2020. He leaves behind his wife Margaret, daughters Karen and Hayley, and three grandsons.

Dr Jan Bergmanson is a Brien A. Holden Professor of Optometry at University of Houston College of Optometry and founding director of the Texas Eye Research and Technology Center. Professor Simon Barnard is a visiting professor in clinical optometry at the Department of Optometry & Visual Science School of Health Sciences, Hadassah Academic College Jerusalem, as well as principal optometrist and partner of Barnard Levit Optometrists London.