“It has given me a new lease of life”

I’ve suffered with retinitis pigmentosa since I was born. I was around eight years old when I was diagnosed. As a baby, when I looked at toys, I would hold them up to the light. That is what prompted my parents into thinking that there was something not quite right with my eyes.

I’ve been a patient of Manchester Royal Eye Hospital for nearly 40 years. During that time, there hasn’t been any treatment. Every time I went in, it was a case of being told that they can’t really do anything because a treatment had not been developed. As soon as the gene therapy came up, I thought ‘Wow, that’s amazing. Let’s do it.’

In October 2019, I received an email from Moorfields explaining that this new form of treatment might be authorised on the NHS. There were certain clinics that were going to be allocated the drug so they could perform the procedure. I got a couple of phone calls after that from genetic counselling inviting me to go in. I did all of the eligibility tests to make sure I was eligible for the treatment on New Years’ Eve.
After that, I waited to find out when they would do the operation. I pretty much made the decision there and then once I was told that I was eligible. I said, ‘Yes, I will go ahead with it.’

They said, ‘Do you not need to think about it?’ But I had thought about it, and I wanted it done

Before the operation, I had pretty much no nighttime vision at all. When light levels were low, I really did struggle. I had 10% vision in each eye in good light. I use a cane when I am out and about. I have a clock that reads the time and there are knobbly bits on my cooker and my washing machine. At work I have an enlarged monitor. As time has gone on, even doing simple tasks like washing dishes has become a struggle.

It will definitely improve my working life. I work for a travel company in after-sales. At the moment, I am on reduced duties at work because there are certain systems that I couldn’t use on the terminal at work because of the condition. It causes eye strain, with my eyes aching and my vision becomes worse. With my eyes not having to work as hard as they have been doing, that is going to improve my life a lot. 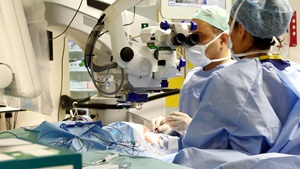 It has been a massive worry for a very long time. I was ecstatic when I found out I was eligible. When I found out how much it cost per eye, I thought ‘Good on the NHS’. They said, ‘Do you not need to think about it?’ But I had thought about it, and I wanted it done.

I have seen improvements in my vision since the operation. It has made me a bit more optimistic about my future. I’ve suffered with depression and anxiety before and it has given me a nicer outlook on things in the future. It has given me a new lease of life.

Lee Morris, 39, from Chorley in Lancashire, was one of the first patients in the UK to receive NHS-funded Luxturna treatment at Manchester Royal Eye Hospital, part of Manchester University NHS Foundation Trust (MFT). The gene therapy helps children and adults with retinal dystrophies caused by a fault in the RPE65 gene. This ground-breaking diagnosis and treatment was delivered by a multidisciplinary team made up of consultants in vitreoretinal surgery, paediatric ophthalmology and genetics in conjunction with genetic counsellors, optometrists, orthoptists, nurses, vision scientists and pharmacy colleagues at MFT.