Drew Thompson and a small team of volunteers produced and donated more than 1500 face shields over the lockdown to charities, hospitals and keyworkers 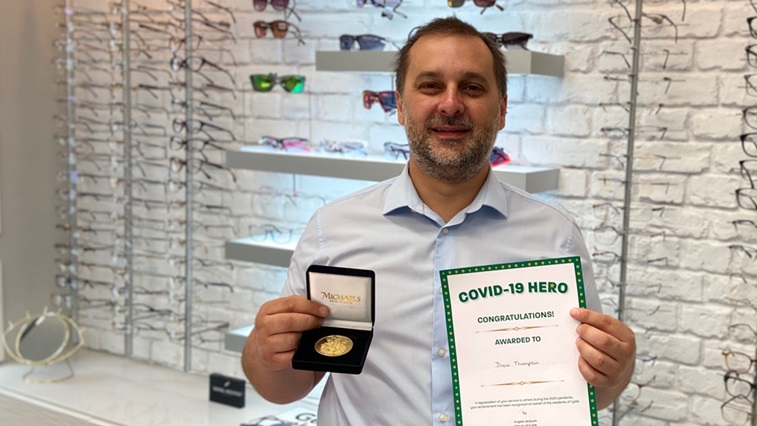 A silver lining of the coronavirus (COVID-19) pandemic has been the individuals who have stepped up to help others through the past few challenging months. Now one optometrist has been recognised for his work meeting the need for personal protective equipment (PPE).

Throughout the lockdown period, independent practice owner and specialist optometrist, Drew Thompson, has produced and donated between 1500 and 1600 face shields.

First using a 3D printer that he had originally purchased to create prototypes for glasses, Mr Thompson saw the requests increase as the challenges to source PPE grew. He went on to purchase another two printers to help with production.

Now, Mr Thompson has received recognition from the Mayor of Fylde for his work.

Sharing his reaction to the nomination, Mr Thompson commented: “To receive it was quite a surprise but a welcome one. I didn’t do this project for recognition, but it is satisfying to know that people have noticed and are glad that we did what we did.”

The Mayor put out a call for nominations for COVID-19 Heroes, aiming to recognise “those individuals who have been going above and beyond during these difficult times.”

“I was nominated for this by a patient who happens to be a councillor,” Mr Thompson explained. “During the lockdown I was contacted by the Fylde councillor, who was co-ordinating efforts, and she placed many an order with me.”

I didn’t do this project for recognition, but it is satisfying to know that people have noticed and are glad that we did what we did.

“I think it was because we made such an effort, certainly in the early days of the outbreak, to make sure we could supply as many of those in need as possible,” Mr Thompson added. “I think she recognised that is was quite an effort for one guy and a couple of his friends.”

Mr Thompson and two others who helped in the production of the face shields received a medal and certificate in recognition of their work through the pandemic.

“One was a friend but the other was a young chap who is just going to university. I think this will really add to his CV and make him stand out from the crowds in his interviews. I’m really pleased for him, and grateful he helped me out with the shield manufacture,” Mr Thompson commented.

I’m really proud of what we did. It gave me a sense of purpose during those really uncertain and worrying times.

The team donated face shields to frontline and essential workers across the Fylde, from hospitals and care homes to charity staff.

The optometrist shared a video compilation of the donated face shields in action, explaining that while the images were helpful to see that the shields were fit for purpose, “It also gave us an insight into the good work people were doing and that what we produced was helping them feel safer doing that work.”


A compilation of the face shields produced and donated by Thompson & Hardwick Optometrists, with the support of Virtual Living and Louise Morgan Chiropody.


“I’m really proud of what we did,” Mr Thompson continued. “It gave me a sense of purpose during those really uncertain and worrying times. I’m so glad that I thought of doing it so early on because I really do think that it made a difference.”

Speaking to OT in April, Mr Thompson described how producing the face shields had helped to keep the whole family active. Commenting on their reaction to his nomination as a COVID-19 Hero, he explained: “They were very proud, but I do have to recognise that they were a major part of the effort.”

With the lockdown measures easing and as PPE supply chains strengthen, Mr Thompson said that production has “pretty much stopped.”

As for the extra printers, Mr Thompson intends to donate them to a local school. He commented: “I think it really has been a positive story for us, and continues to be so.”