Tom Watters: I first noticed black wavy lines across my right eye one morning while working. The black lines disappeared in a relatively short amount of time but I was left with floating black spots. When the spots persisted for a few days I contacted my local GP. The doctor gave me a video consultation and seemed to think that the black spots were floaters but said he would organise a telephone consultation with Dr Gurney [At Kent Eye Care].

How has COVID-19 changed the way you accessed the services you needed from your optometrist?

TW: Dr Gurney called me on the afternoon following my discussion with the GP and asked me to describe my symptoms. As my vision was clear beyond the floaters he agreed with my local GP that they were most probably floaters that would sort themselves out. But he did stress that if there was a change then I should get back in touch as soon as possible. A few weeks later I began to get suspicious that there was something else going on. I contacted my local optician but due to COVID-19 they were unable to open up the surgery until the Government gave them the new guidelines. Once I saw that the opticians were to be allowed to open I contacted the practice and booked an appointment. The optician carried out the tests and requested I get back in touch with Dr Gurney straight away.

TW: I spoke to Dr Gurney later that afternoon and he asked for my new observations in my eyesight. I explained that the black spots had persisted but a crescent shadow had also appeared at the bottom of my right eye. Dr Gurney asked me to come and see him for an appointment on Friday morning at 11.00 am. Dr Gurney opened up his practice to see me and carried out the tests and scans. The scan confirmed there was a tear in the retina and the fluid was separating the retina.

Dr Gurney immediately sent the scan results to the eye clinic at Maidstone Hospital and said he would expect them to contact me very quickly to see a specialist. By the time I had arrived back home an hour or so later, the hospital had left a message on my landline and asked me to come in straight away. The doctor who saw me confirmed all the scan results and wanted me to have a procedure straight away.

It was late on the Friday afternoon but as he considered that my condition needed immediate attention, and the theatres were not in operation at Maidstone, he arranged for me to have the procedure carried out at St Thomas's the following day.

TW: At St Thomas's I was very well looked after and late on Saturday afternoon Giancarlo Dell’Aversana and his team carried out the procedure. The procedure took approximately 45 minutes to an hour. After lying on my side for an hour in the recovery area and ward room, I was allowed to dress and leave the hospital.

TW: I had a follow up at Maidstone hospital the following day. This involved carrying out a pressure test for the necessary checks that all was in order. I later received a text and a follow up letter from St Thomas's asking me to attend a consultation in July.

TW: I received first class attention from all parties and was very well looked after. If we hadn't been in a lockdown situation with COVID-19, I would have been able to make an appointment for a scan at an opticians earlier. But being a typical bloke I carried on. What I should have done, once I had begun to suspect that there was something more serious going on with my right eye, was go to a hospital for a scan to be carried out. Then the treatment could have been carried out earlier.

I think in West Kent, the APCOS system shows that the collaboration can be beneficial to all, but particularly the patients. The system works because we are a team.

How has COVID-19 affected your practice, and how did you adjust your services/approach to be able to meet the needs of your patients, such as in this case?

Dr John Gurney: I predominantly do ophthalmology in the community – that is how I work day-to-day. These are commissioned services through the clinical commissioning group; we receive referrals from other optometrists, GPs, hospital, direct from A&E, NHS 111 and pharmacists, all acute eye conditions normally come to us first.

Over the COVID-19 lockdown period we've been seeing all the hospital patients as well. That is not only acute conditions but also post-surgical follow ups.

In Tom's case, he was referred to me under the acute primary care ophthalmology service (APCOS) from his GP.

Prior to COVID-19 I would run a walk-in clinic for emergency appointments, but now everything is appointment based to allow for the proper social distancing. So when he came in, I had the full personal protective equipment (PPE) on and everything else I’d need.

How did you interact with the patient and carry out the sight test - have you introduced any systems or processes that have helped you during COVID-19?

JG: I had spoken to him a week or so beforehand as he’d had initial symptoms but which he felt were getting better. I said it sounded like a posterior vitreous detachment (PVD), but if the symptoms got any worse then I told him he should call me, which is what he did. Initially his symptoms were okay, but then a break can develop later on, and as soon as his symptoms changed he called and I saw him the next day, which is as it should be.

I had a chat with him over the phone to see what the situation was and his symptoms worried me so I said he'd better come in.

JG: I had his symptoms beforehand so I knew which eye it was. I dilated him so I could have a good look, checked his vision and took a look in my slit lamp with my indirect technique. I noticed he had a very shallow detachment in the superior retina of the right eye.

Tom emailed me after his surgery to thank me for saving his sight, which I thought was really nice. He did say he might have to do a bit less head-banging to Led Zeppelin for a few weeks, but I said it’s worth it.

How did you approach explaining what you had identified/suspected?

JG: I simply said, “Right Tom, you’ve got a retinal detachment, so we need to get this sorted.” I said that I’d want to get a scan to send to the vitreoretinal consultant, and that he would need surgery, but I explained, “We can fix it, and I’m glad you came to see me today and not on Monday because the prognosis for recovery would have been worse.”

I think if you’re upfront with people and tell them that you are acting in their best interest and that, though it’s serious you can get it sorted, they appreciate that.

JG: Once I had identified the retinal detachment, I took a scan to send to the consultant and ask how quickly he wanted to see Tom. I thought if I sent him the scan then he could see where the actual retina was coming away and decide how quickly he wants to see him. He said, “We’ll see him today and operate tomorrow.”

Every day counts with a retinal detachment. In Tom’s scan you can see it is fairly close to the macular superior and with gravity pulling down, the retina is more likely to come off quicker than if it was an inferior detachment. 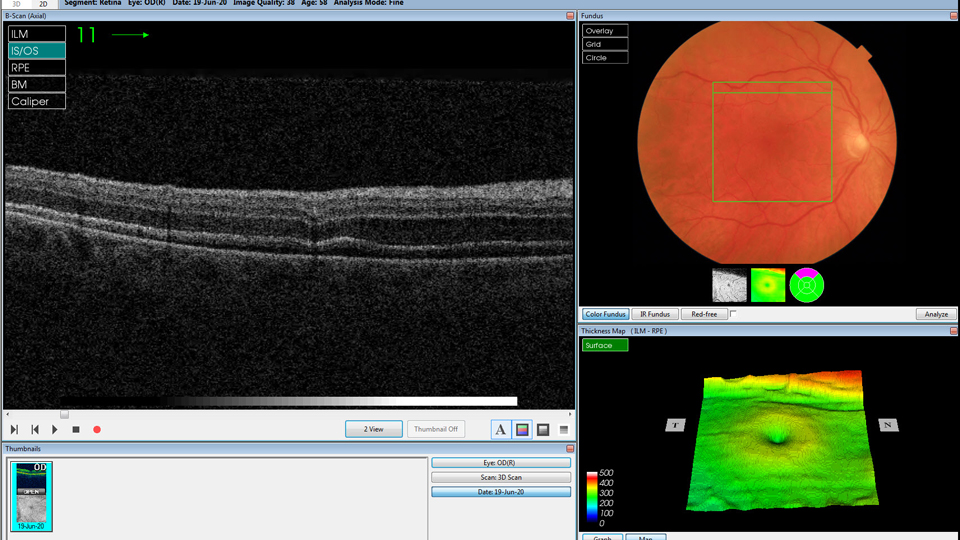 JG: Tom emailed me after his surgery to thank me for saving his sight, which I thought was really nice. He did say he might have to do a bit less head-banging to Led Zeppelin for a few weeks, but I said it’s worth it.

I had told him at the time that after the surgery he would need a few days off to recover, which he did and though he said he found it a bit boring, he was grateful. It’s always nice to hear back from the patient that it is a positive outcome.

What would be your top tips to other practitioners when making a referral, either generally or during COVID-19?

JG: Be sure of your diagnosis. Dilate the patient and have a good look with a good indirect technique or contact lens so you can see these patients with tears. Or, if you can’t do it then refer to someone who can.

I think the key to a good referral is to tell them what you see: what is it, how long have they had it and what is their vision. Tell them that the patient needs surgery and ask when they want to see them.

Establish good relationships with your local consultants as best you can. Get to know them by name and let them know you. We are in a WhatsApp group with the local consultants so I can ask questions, and it works. It’s a good example of integrated care between secondary and primary care, and that is really important.

I think in West Kent, the APCOS system shows that the collaboration can be beneficial to all, but particularly the patients. The system works because we are a team.

What would be your key message to patients during COVID-19?

JG: It is a challenging time, and people are worried about the COVID-19 virus, but there are times when it is very important to see a clinician about something. People are scared about going out, but in Tom’s case, he wouldn’t have eyesight in that eye if he hadn’t seen someone.

If you think there is something seriously wrong, or a healthcare professional says that is sounds like there could be something wrong, don’t be afraid to turn up. We are properly equipped, we have the right protective gear to protect them and us, so don’t be scared. It could make all the difference.