“My job is kept interesting by continuing to build my skills”

Coronavirus: on the ground in Cowes

Our practice is in Cowes on the Isle of Wight. We are a seaside town with many retirees. Demographics are biased towards the over 65s. The main occupations on the island are tourism and agriculture, although in Cowes, sailing has a large presence too.

Leading up to lockdown, people were booking eye tests right up to the day we were told we couldn’t offer routine appointments. When we phoned patients who were booked in to tell them we couldn’t see them, that was quite sobering for a lot of our patients. They weren’t expecting it.

We are a family and community-based practice. Our waiting area doubles as a meeting point. People will see someone they know when walking by the practice and pop in to have a chat. I think people have missed that. It is a very close community and I think, because of that, people will come back.

Lockdown came in after the furlough scheme had started. We knew that our staff would be safe but there were sleepless nights. After a while things started to fall into place and we knew that we had a reasonably secure financial standing in the short-term.

We have one long term member of staff who is in the shielding group. Before lockdown, as soon as it became clear that it was getting more serious, we had to tell them they needed to work from home.

They were very disappointed and didn’t want to be alone at home. But aside from our duty as an employer, we care for the staff. They are like our extended family.

During lockdown, Sandra and I were in the practice every day to provide emergency and essential eye care; we might have eight to ten phone calls each day and physically see a few patients in the consulting room each week.
It was sometimes stressful getting all the information needed to make a clinical decision over the phone. People don’t always describe things over the phone as they would do if they were sitting in the same room as you.

Initially it was difficult to source PPE but gradually channels started to open up. The optometrists on the island are a close community. We look after each other. One of the independents managed to track down a source of masks. She phoned around the practices and asked whether we wanted to share the order.

On the Isle of Wight, there have been just over 420 COVID-19 cases. The hospital upped their intensive care unit capacity to 30 beds but rarely were more than half full at any one time. The number of ferries has been dramatically cut back. One of my colleagues who lives on the Isle of Wight but has a practice in the New Forest had to temporarily shut his practice because the ferry crossings stopped.

Matt Hancock stood up and said, ‘Where the Isle of Wight goes, Britain will follow.’ We were collectively stunned. You have to look for the glimmers of light in all of this and the whole island thought that was hilarious

Being on an island has been a blessing in a way. People who come from the mainland are called overn’ers. I’m an overn’er even though I have lived here 20-odd years. The big worry is about what will happen when the overn’ers and the DFLs [down from Londoners] start coming back.

When they announced that the contact tracing app would be tested on the Isle of Wight, Matt Hancock stood up and said, Where the Isle of Wight goes, Britain will follow.’ We were collectively stunned. You have to look for the glimmers of light in all of this and the whole island thought that was hilarious. We signed up to the app the day that it came out. It was very straightforward. If you were asymptomatic, you just left it running in the background. As we now know, the app has not been as successful as hoped.

When they tested the contact tracing app on the Isle of Wight, some of our elderly patients struggled with the technology. We did wonder if they were beginning to unlock things too quickly with an app that was only in trial stage. 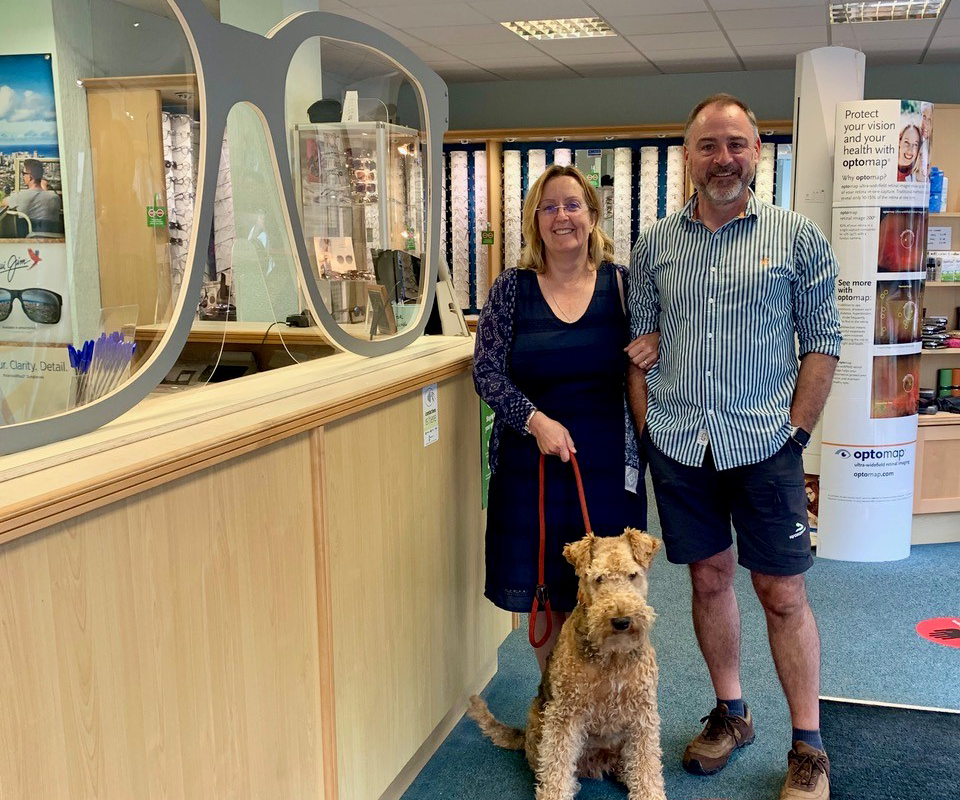 Sandra, my wife, manages the practice. Before lockdown eased, we were both at the practice six days a week. Although we spent a lot of time together, we managed not to fall out with each other too often. My commute to work is a two-mile walk through bluebell woods and alongside the river with our airedale terrier, Rex. He couldn’t believe his newfound freedom in practice, normally he has a bed out the back but during lockdown he would sit by the front door in the sun watching the world go by.

Our daughter was in her first year of university in Birmingham having a great time but it has been stolen away from her, like it has been for so many young people. The only trip off the island I have had since March was to go and collect her belongings that she had to leave in halls when she came home at the start of lockdown. Our son and his girlfriend are in London but we catch up over Zoom and watch the National Theatre online together as a family. We miss him but we know he is safe. We are looking at doing a virtual escape room together next.

The Optix forum that Trevor Rowley set up has been a God-send. It is incredibly lonely when you are sitting by yourself in practice and thinking ‘How are we going to get out of this hole?’ The Hakim Group have also been incredibly generous sharing their knowledge and experience with independent practices, helping us sift through the conflicting messages we have been bombarded with.

It has been really nice to see the profession coming together to work out how to come out the other side of this. Getting ready to restart seeing more patients has been hard work, but we are very pleased with our spectacle-shaped reception screen - it makes everyone smile when they come to practice and makes things a little less scary.

You could very easily get tied up in the doom and gloom but we have to believe that it will be fine and our patients will come back. As a community practice, we have a rapport and a bond with our patients. I think they will trust that we are doing the right thing.

As told to Selina Powell.

More on the ground features