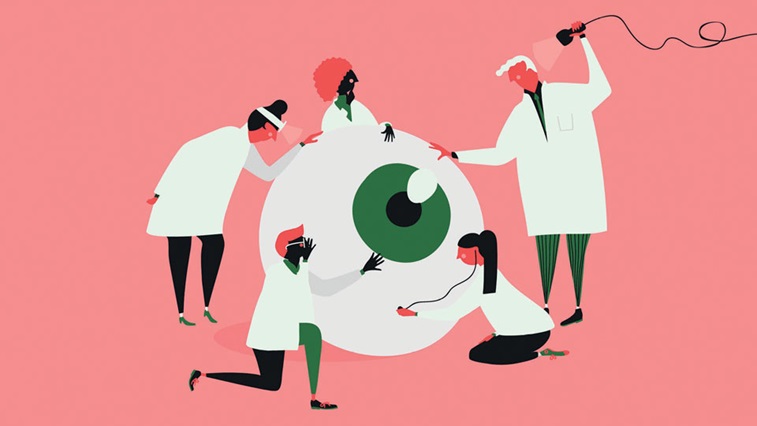 One or two? To outsiders, a profession where the same tests are performed day-in, day-out may seem repetitive.

But the diversity of patients and the range of conditions they present with means that optometry is anything but routine.

OT asked four optometrists to describe their most unusual working day, highlighting that each day can be transformed by a single patient walking through the practice door.

I was working as a pre-reg when a woman came in complaining that she could only see out of the corner of her left eye. I remember carrying out Volk and behind her lens there was this grey mass like a half moon. I had never seen anything like that before; it wasn’t in the textbooks that I had read.

I called my supervisor at the time who had never seen something like this either. It turned out that she had a rare choroidal melanoma which had come from her nose and encroached her whole retina. We called the hospital because we knew it was some sort of mass. She went in the next day and they enucleated her eye. When I saw her three months later she had a new glass eye.

They were able to stop the cancer spreading, which was great. It made me feel good about myself. At the time, I thought ‘I have definitely chosen a profession I can help in and make a difference.’ Since then, I have had my fair share of papilloedema and melanomas. You are nervous for the patient and want to get them in the right place as soon as possible. If the cancer spreads, it is life or death. Once they come back and see you, you are reassured that you made the right decision and you realise that you are making a difference to someone’s life.

The experience taught me to check everything. You can get nervous and scared for the patient, but you have to remain professional at all times. You want to tell the patient what is going on but you don’t want to alarm them or scare them. It is making sure the patient is comfortable and building that trust and rapport with them.

“You never know who is going to walk through the door”

When I was doing sessional lecturing for the optometry school at the University of Manchester, a chap came in for an eye test at the teaching clinic. He had come in three years before and they had spotted a mole at the back of the eye. He had no prescription for distance and he had a simple reading prescription.

Without the teaching clinic there, I don’t think he would have visited an opticians because he didn’t have any symptoms. He only popped in because he was at work anyway.

I dilated his eyes so the students could have a look at the mole in his right eye. After that I had a look at the left eye and I thought ‘I really don’t like the look of this.’ There was something small off in the periphery; you would have missed it without dilation.

I took the patient down for a photograph and optical coherence tomography scan. It appeared to be a classic tumour but it was really tiny. I dismissed the students and spoke to the patient without them in the room. I now had to tell this patient about something that is not only potentially sight-threatening but also potentially life-threatening. It was a very difficult conversation. I spoke to him and said ‘I have found something that looks potentially serious. I need to get you referred as soon as possible to a specialist.’

I work as a full-time optometrist for a large multiple in the West Midlands. Last year, a regular patient of mine, aged 72, attended for a sight test. His main complaint was that he had been experiencing headaches over the past week. He was referred for an early sight test by his GP.

His visual acuity, ocular health and intraocular pressures were unremarkable, but when his visual fields test was performed at the end, as is the protocol with symptoms like headaches, he produced an unusual visual field defect. It was a left sided superior quadrantanopia or a ‘pie in the sky’ defect. Due to his age and type of visual field defect, I suspected a vascular cause.

I contacted the accident and emergency department at the local hospital, who wanted to see him immediately. Whilst he was waiting for transport to the hospital, he became very unwell. As I attended to him, his headache had worsened, he became very pale and started to vomit. At that point, an ambulance was called and he was admitted into hospital.

A week later, the gentleman’s wife came into the store to give us her thanks for the swift management of her husband, as he was found to have a brain haemorrhage. His consultant had said that if he was left untreated for much longer, it would have been fatal.

This case helped to reinforce the importance of visual fields in practice; although there was no obvious signs or pathology, the cause was something beyond the eye. It is clear there is to more to a sight test than meets the eye.

“He wasn’t breathing and his wife was shouting his name”

I was working as a locum and had a 75-year-old patient booked in for a dilation. He arrived a little bit late with his wife who apologised and explained they were late because he had nearly fainted coming in.

When I asked whether she was sure he would be alright, she said that he was just a little bit lightheaded because he did not have any lunch. He was adamant that he wanted to get his dilation done. We gave him some drops for his eye then sat him down with coffee and a biscuit while he had a rest. When he stood up to come to the exam chair after the dilation he acted a bit woozy so we sat him back down. Then he passed out.

I knew this was serious because of the look on his wife's face when he fainted. I braced myself in front of him and I placed my arm behind so he didn't fall backward. He began to have a seizure. His eyes rolled back in his head and I had my hand on his chest so that he wouldn't fall forward. He wasn’t breathing and his wife was shouting his name. I told the manager to dial 999 and ask them to attend here right away.

Finally, he caught his breath and woke up a bit dazed. The paramedics came and they took him away. Afterwards his wife called back and said when they got him to the hospital he seemed to be fine.

I did panic for a little bit, but I had to maintain my composure for everyone in the building. There were two little girls about to have their first sight test in the waiting room and I had to keep calm for them.

More on care for all