Locum optometrist at Specsavers, Zeeshan Khalid (pictured), and mother of 10-year-old patient Eve (pictured), Penny Wilson, discuss a referral that led to the identification of a brain tumour 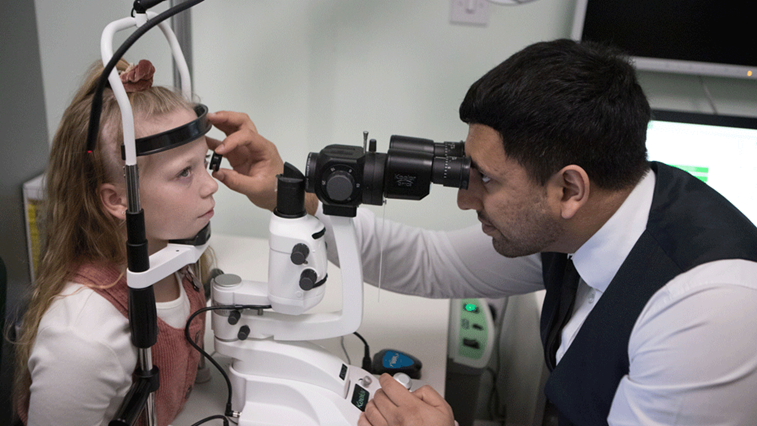 Before you took Eve for a sight test, had she experienced any symptoms?

Penny Wilson (PW): Eve said that her eyesight was blurry and that her teacher told her to go for a sight test because she couldn’t see the board. It was difficult to believe that she couldn’t see when she was still getting by day-to-day. She’d come home from school and tell me that she’d got into trouble. She’s always been really good at school so I just felt that something wasn’t right. I noticed that when she was on her phone, she was taking a screenshot and zooming in to read.


What did the optometrist find, and how did they explain the next steps to you?


PW: The optometrist, Zeeshan, said that the score she was coming up with was as bad as someone who could be registered blind. It didn’t matter what prescription he put in it wasn’t improving her vision. He wrote a letter and said I had to go straight to the hospital. He was so serious and persistent that it made me realise something was wrong.

PW: I was struggling to comprehend how she was getting by and managing to do everything she was doing each day. At that point I didn’t know that she potentially had a brain tumour, I just thought it was something eye related. She didn’t have any other symptoms. At hospital, they did the standard tests which showed there were not any problems.

We went on holiday to Disneyworld and I was constantly testing her, asking ‘what way does the sign say we need to go for the ride?’ and she said she couldn’t read it. I also noticed that she was a lot more tired than she was around six months before that. Then she started getting headaches.

Had Zeeshan not been so concerned on that first visit to Specsavers, I wouldn’t have persisted with getting further tests done for Eve. Something felt really wrong. I kept thinking, ‘why is a 10-year-old who is usually very active, falling asleep during the day?’ That’s when they gave her an MRI scan.

Did Eve have to undergo further treatment and what has been the outcome?

PW: Eve was diagnosed with a cyst and a tumour. They drained the cyst, which looked like it was about the size of a satsuma. At the moment, the tumour is still there but it isn’t growing. Eve now has an MRI scan every three months and as long as it remains stable she won’t need any further treatment.

After Eve had surgery, I was washing her hair and asked her to pass the shampoo. She said, ‘I can read it says shampoo now, mum. Before I was only guessing from the shape of the bottle.’


Have your views on the importance of sight tests and eye care changed as a result of this experience?


PW: I genuinely thought that we just were going for an eye test, she might need glasses and that would be the end of it. I had no idea that going for an eye test would start this whole journey. As a parent, I’m quite busy and it’s easy to ignore what your kids are complaining about. Had I realised how important an eye test could be, I’d have been having them done as routinely as a dental check.

Zeeshan Khalid (ZK): Eve came into the practice saying that she was unable to see the board at school and the TV at home, for distance and near, which rang a few alarm bells for me. During the sight test, I confirmed that her vision was significantly reduced. There were no signs of any ocular abnormalities, inside or outside the eye, and spectacles were not correcting her vision. Due to the age of the patient and the fact that it had come on suddenly, I thought that it might be something neurological.

ZK: I explained to Penny that I didn’t think that anything was wrong with Eve’s eyes, but that there might be something going on further back behind the eye so she needed to be seen at hospital that day as an emergency. Penny was very understanding and realised that her daughter needed to be seen sooner rather than later.

There were no signs of any ocular abnormalities, inside or outside the eye, and spectacles were not correcting her vision

ZK: I am a locum, so I heard about the case via email from the practice saying a patient wanted to thank me. Penny’s email said that my referral had led to them finding a brain tumour, which had affected the optic nerve and reduced her vision. It had also affected her tear ducts as Eve hadn’t been able to cry. I saw Eve a couple of weeks ago when I went to the practice. I was really happy that I was able to help someone.

What special considerations do you have to make as a locum when referring?

ZK: If I’m not able to do follow-up because I’m not there then I do an internal referral to the in-house optometrist. I’ll leave a note to make sure that the patient is seen. I have to make sure patients are not left hanging or aren’t sure why they’ve been called back.

What are your three top tips for practitioners when carrying out eye examinations?

ZK:1. Listen carefully to the patient’s symptoms and the parents, who can be amazing source of information during children’s sight tests. They know their children and sometimes a child will come into a practice and say they can’t see anything because they want glasses

2. If you suspect that something sinister is going on with the patient’s vision then do not hesitate to refer. If you have any doubts, especially with children, refer

3. Communicate your findings with the patient. Explain why they need to be seen and what you found. Relay that information as best you can without scaring the patient.