Optometrist at Vision Express in Hartlepool, Matthew Gee-Smith, and patient Sandra Gleeson, discuss how mixing up numbers at bingo led to a referral 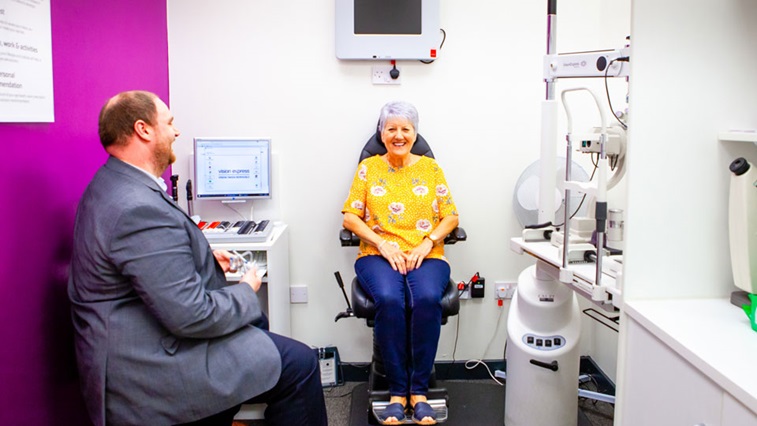 Sandra Gleeson (SG): I was struggling to see the numbers when I was playing bingo. I had a little vision loss on one side. I would mix up numbers such as 84 and 89. It went on for about two months and I knew I needed to get it checked out.

SG: I see Matthew every time I go to the Vision Express practice in Hartlepool and this time he knew there was something wrong straight away. He told me I had to go to Sunderland Eye Infirmary immediately and it went from there.

SG: I was fine until the lady examining me said I’d had a silent stroke in my sleep, which knocked the wind out of my sails. Normally a stroke damages a vein in your brain and can cause life changing side effects. My stroke damaged a vein in my eye, causing the blurriness.

I was fine until the lady examining me said I’d had a silent stroke in my sleep, which knocked the wind out of my sails

SG: I was referred back to the local hospital and put on medication, but otherwise I was ok. I’ve been told that my sight in that spot will never come back, but I’m not going to let it affect me playing bingo.

SG: It has definitely changed my view. I recommend anyone that everyone has an eye test. I have two children and four grandchildren, and I’ve told them all to go and have an eye test.

SG: I don’t let things bother me. I’ve worked in care for almost 40 years and for the last four I’ve been supporting a young disabled lady. I tried retirement, but I didn’t like it – I’m a doer. I’m not going to let a stroke stop me from doing what I love.

I’ve been told that my sight in that spot will never come back, but I’m not going to let it affect me playing bingo

Matthew Gee-Smith (MGS): During Ms Gleeson’s sight test I identified a visual field defect, which can be caused by general health issues rather than a problem within the eye. My findings were unexpected as Ms Gleeson’s general health was good with very little to indicate that she was at risk.

MGS: By building a good rapport during a sight test, it is easier to gauge the best way to explain the results to a patient. It’s about finding the right balance between ensuring they understand the importance of further referral without causing them to become overly anxious.

MGS: As Ms Gleeson had her symptoms for two months and they were stable I decided to refer urgently. As my results showed a possible more serious general health issue, I felt that a routine referral may leave an increased risk of further health problems.

MGS: Ms Gleeson contacted the practice to let us know the results of my referral a couple of months later. I have since seen Ms Gleeson for a sight test and was pleased to find there has been no further deterioration of her vision and her general health is under control.

What are your three top tips for practitioners when carrying out eye examinations?

MGS: 1. It is important to establish a good history of any symptoms as, generally, this can influence diagnosis and influence urgency of referral. For example, a stable symptom that has been ongoing for a year may be more likely to need routine referral, whereas a recent onset deteriorating symptom may indicate that a more urgent referral is needed

2. Ensure that your referral is sent through the relevant pathway to minimise delays

3. Ensure that your patient understands why they are being referred and the importance of attending any follow up appointments they may receive from the referral.