“There was anxiety that something was clearly wrong”

Optometrist at Stokeld & Stephens Opticians, Robert Stokeld, and his patient William Eagling discuss how temporary blurring of vision led to a referral 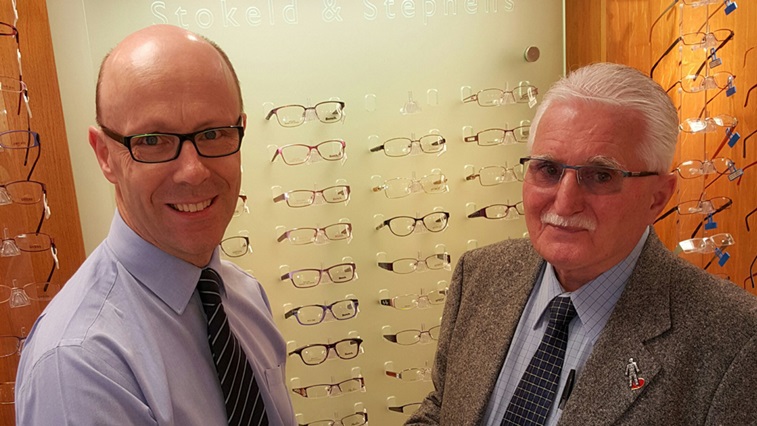 William Eagling (WE): I had noticed occasional loss of vision and focus in my right eye, most particularly while looking upwards or downwards. This only lasted for a few minutes and after blinking seemed to clear.

WE: My optometrist, Robert Stokeld, came to a conclusion that the temporary blurring of vision in the right eye was possibly amaurosis fugax. This implied the effectiveness of the ipsilateral carotid artery was poor. As a result, he directed me to my GP with written guidance.

WE: My feelings were slightly mixed and uncertain. While not feeling unwell in a general sense, there was anxiety that something was clearly wrong.

Did you have to undergo further treatment and what has the outcome been?

WE: After an urgent referral through my GP, matters moved quickly to the James Cook University Hospital (JCU) in Middlesbrough for scans and checks. These revealed a seriously blocked right carotid artery, putting me at a serious risk of a major stroke or worse. I am pleased and relieved to say that JCU Hospital undertook urgent surgery to remove the blockage and I have made a full recovery.

WE: I cannot emphasise how important it is to have regular eye tests, not only to spot signs of eye conditions but other health conditions. Without the prompt and early intervention of Robert, I may not have been able to recount my experiences.

WE: It goes without saying that I am even more aware of the ongoing need for regular full check-ups and eye tests.

Without the prompt and early intervention of Robert, I may not have been able to recount my experiences

Robert Stokeld (RS): Towards the end of William Eagling's eye examination he mentioned, almost casually, that his vision went black if he stretched his neck in a particular way. I think he wasn't really expecting this to be anything particularly significant. I was, to say the least, slightly alarmed by what he said because I instantly knew that this could have very significant consequences.

How did you approach explaining what you suspected?

RS: As soon as he described his symptoms I told him that this could be something that needs urgent medical attention, which I think he was slightly taken aback by. It’s always difficult to tell a patient they could have a potentially serious health condition, but I always try to be as open as I can with patients so that they know what to expect.

I instantly knew that this could have very significant consequences

RS: I referred William to his GP immediately for urgent tests. They assessed him and referred him for hospital tests straight away, which then resulted in his surgery. I got a letter back from his consultant about what had been found and William came to see me to thank me once he’d recovered from his surgery. Since then he has naturally been a great advocate for the benefits of eye examinations.

What would be your three top tips to other practitioners when carrying out eye examinations?

RS: Always give your patients sufficient time to give you a clear history and symptoms, and ask open questions; always maintain an air of confident professionalism and be completely open with patients about what their condition could be, but leave the clinicians room to make the final assessment; and don't let the pressures of the day interfere with the amount of time your examinations need to take.