How does education need to evolve to meet the needs of a changing profession? OT  spoke to families with multiple generations working in optics for their take

Donald Cameron remembers carrying an advert for the Glasgow Caledonian Technical College in his pocket, after becoming interested in the same field as his dispensing optician father.

Years later after training as an optometrist and establishing his own practice in Edinburgh, his son announced his intention to become an optometrist at the age of 12 during a car journey.

“I just wrote it off at the time, but he never really deviated from that,” Donald told OT.

A sign that the fourth generation of Camerons also felt the pull of optics came when Ian Cameron’s young children returned from nursery with artwork showing what they wanted to be when they grow up.

Across the UK there are many practices where family members work together and business is innately personal.

Optometrists cultivate a practice over years, going through highs and lows with their staff before handing it on to the next generation.

“It’s ideal if you can pass on a business like this. If you sell it, it is the end of your vision. You live, eat and breathe it,” Donald said. 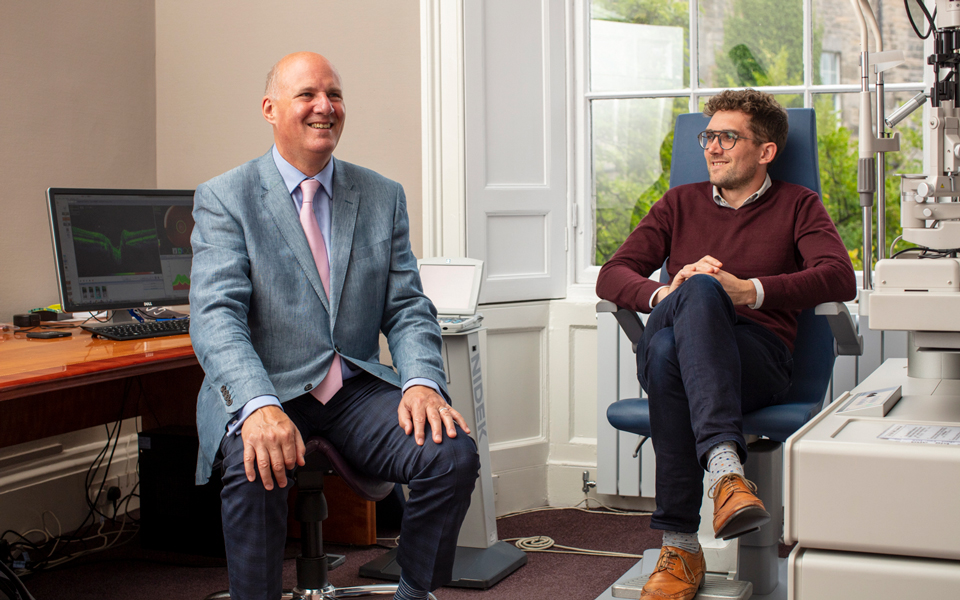 “There’s also the responsibility of the staff and the households you are responsible for. Your decisions are not just for yourself, you have to think about what will work for everybody,” he observed.

In order for future generations of optometrists to thrive and family practices to remain sustainable an ability to adapt is essential.

Optometry is in a state of rapid evolution, with technological change, an ageing population and a stretched NHS among pressures that are shifting the optics landscape.

The General Optical Council (GOC) is addressing this need for change through the Education Strategic Review; an overhaul of optometric education and training that aims to equip the profession for the future.

OT spoke to three families with multiple generations working within optics for their views on the skills and knowledge that future optometrists will need.

Ian highlighted that there has been a huge amount of change within the profession over the span of his father’s career.

“My dad came across a unique chasm in his career that I have not really crossed. At the start of his career he couldn’t say that someone had a cataract. He had to call it a ‘clouding of the lens’ because he had to defer to the ophthalmologist,” he said.

“At the time he retired he was qualified in independent prescribing and was prescribing steroids for iritis, using optical coherence tomography and had paperless records. He witnessed all of those technological advances in eye care,” Ian emphasised.

“I think there will be a similar level of change by the time I retire, although I do not know what it will look like,” he added.

In recognition of his services to eye care in Scotland, Donald was made an Officer of the Order of the British Empire in the 2019 New Years Honours List.

Ian believes that the current generation of optometrists are trained to become experts in data capture, but the focus moving forward should be on data interpretation.

Within his practice, Ian focuses his time on analysing data and discussing it with patients with much of the pre-screening performed by other staff members.

“My job as a professional is to analyse and interpret that information and communicate it in human terms to other humans. That is something that machines can’t do,” he shared.

Ian highlights that communication and analytical skills set optometrists apart from the rapidly evolving capabilities of autorefractors and artificial intelligence.

“I’m not worried about the future of the profession. There is still plenty of work for me to do, it’s just not going to be the work that I am currently doing,” he observed.

In Donald’s view, there will be a greater focus on optometrists managing eye conditions independently in the future.

He believes the switch in approach from referring patients to hospital to treating them in the community will require a psychological shift.

“That is a huge thing; making that decision and being absolutely certain that you are right,” he added.

To develop these skills, Donald would like to see a greater focus on peer reviews and case reviews embedded within optometry education and training.

It’s ideal if you can pass on a business like this. If you sell it, it is the end of your vision

This would mirror the way that medical professionals are trained within hospitals.

“A junior doctor learns so much because they always have someone below, beside and above them to discuss cases with. They learn very quickly and learn to be confident in their decisions,” Donald observed.

Five years ago she became a partner in the practice where her mother works as an optometrist.

“I have gone from working for my mum to being my mum’s boss. It took a little bit of getting used to,” she shared.

For Helen, interacting with patients and getting to know them over time is the best part of her role.

Having worked at the practice on and off for 16 years, patients who she first met as children are now heading off to university.

“A lot of my philosophy around the practice very much comes from my mum. It is a family practice. We are never going to be able to compete with the multiples on price. It is about service and people enjoying the experience of coming here,” Helen emphasised. 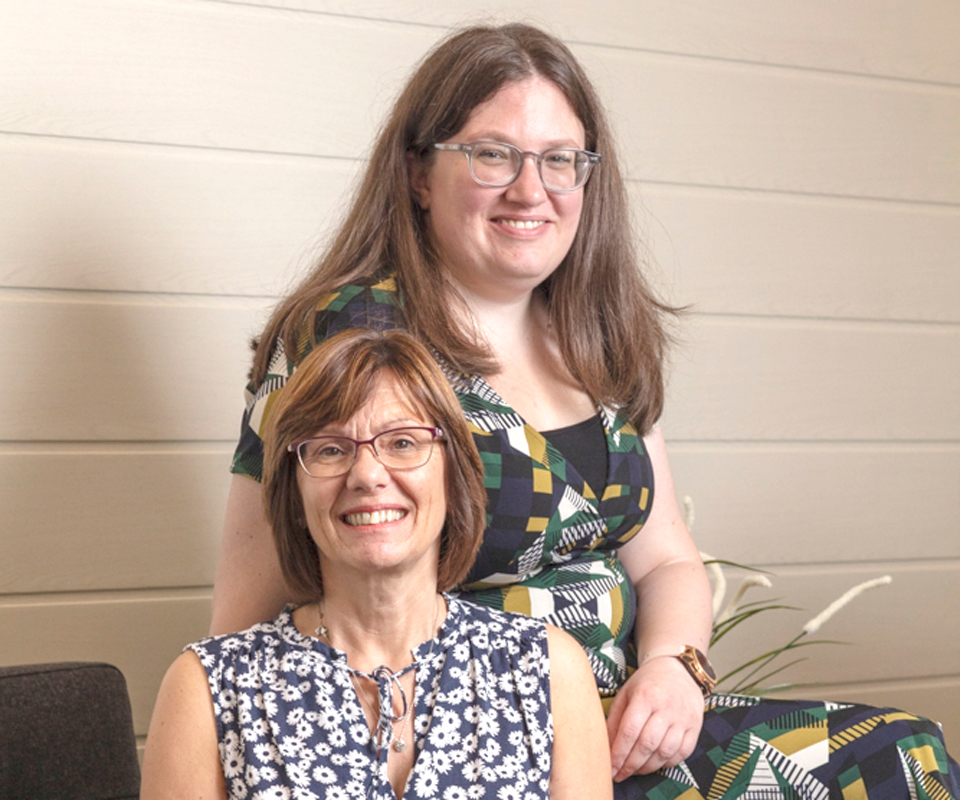 From her perspective as a practice manager, the qualities that she thinks are important in hiring new staff to the practice include a strong clinical focus and flexibility.

“We look for adaptability and people who can move with the times. Technology changes, the lens offering changes, the equipment changes. You do have to be able to keep up with that and stay ahead of the curve,” she shared.

Helen would like to see the education of optical professionals reflect what is happening within the working environment.

“I think education in general moves relatively slowly. It takes time to get things into the syllabus and move things forward,” she added.

Helen’s mother, Nicole Bucys, has worked as an optometrist for more than three decades.

Like her daughter, her patients are at the heart of what she enjoys about optical practice.

“You become part of their lives and you make their life a bit easier. You see people year in year out, you know where they have been on their holidays and you meet their children,” Nicole said.

Although some people might think twice about working closely with a family member, Nicole has thoroughly enjoyed the experience.

“If I worked here and Helen worked somewhere else we would have to arrange to meet for tea. I get a hug off my daughter every morning when I come to work; that is so lovely,” she shared.

In terms of skills that Nicole thinks should be prioritised in optical education, she highlights communication skills, the ability to navigate the patient journey and commercial awareness.

“If students can come out of university with at least a semblance of those skills, they can hit the ground running,” she shared.

“Adapting to change and embracing a growing skillset is going to be better for the patient,” Nicole added.

Optometrist Shaimil Shah is the third generation within his family to obtain a qualification within optics.

He decided to study optometry after working at his father’s practice on school holidays and weekends.

The Nottinghamshire-based practitioner highlights that the best part of the job is seeing children wearing glasses for the first time and noticing the impact that it has.

“I have been wearing glasses since I was eight and I remember the first time I put glasses on. To be able to pass the difference that glasses made on my life on to the next generation that is the most rewarding thing,” he said. 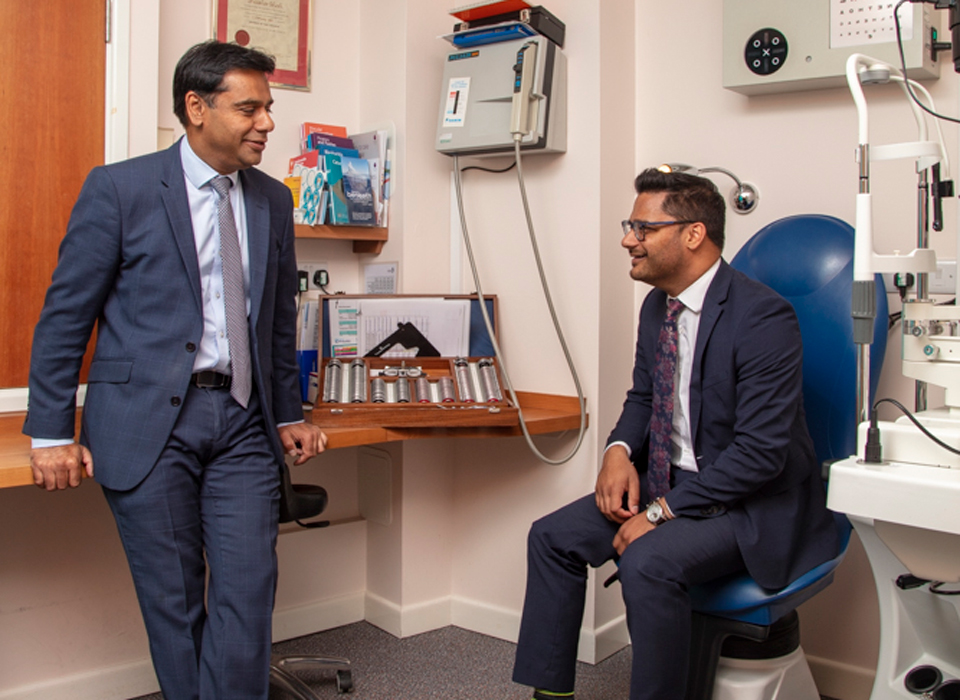 Shaimil observed that as well as teaching optometry students clinical skills, it is important to teach them about the realities of practice.

“There are some optometrists who get a degree, complete their pre-reg and become a practitioner but then they drop out after a few years because they are either bored in their job or it is not what they expected,” he said.

“University can be a bit of a bubble. As soon as you leave, if that is not the way that it is in practice, then you are in for a shock,” he said.

One suggestion that has emerged as part of the GOC’s Education Strategic Review is to provide more peer support to newly-qualified optometrists; a recommendation that Shaimil Shah supports.

“I remember the first day after pre-reg when I was left on my own. The whole time during my pre-reg I had been supervised so it was quite a big step,” he shared.

“It is quite a harsh learning slope and that can be daunting at times for people,” Shaimil highlighted.

Shaishav Shah remembers spending time at the hospital eye clinic as a child where his father worked as an ophthalmologist.

“It was almost a bit like babysitting, where I would be able to sit in the corner and do whatever I needed to do. I thought this is quite good; you get to see different people all the time,” he shared.

After studying optometry at Cardiff University, Shaishav established a group of four independent practices with his best friend who also studied optometry.

Hand on heart, I have no regrets at all. I love what I have done

When his son started studying optometry at Cardiff University, Shaimil had some of the same lecturers as his father.

“It was quite a nice trip down memory lane when we went to the university. It was nice to see that continuation,” he shared.

In terms of how he thinks optometric education should change going forward, Shaishav thinks a focus on communication will be key.

These skills could be developed by seeing patients from an early stage within the degree, he shared.

Shaishav would also like optometry students to have the option to develop skills that will help them to thrive in business.

“I think it is very much a taboo subject at a lot of the universities but many students would like to know how to open a practice,” he highlighted.

“University can be a bit of a bubble. As soon as you leave, if that is not the way that it is in practice, then you are in for a shock”

University can be a bit of a bubble. As soon as you leave, if that is not the way that it is in practice, then you are in for a shock

Despite the challenges facing the profession going forward, Shaishav is optimistic about the future of optometry.

“If someone asked me ‘How is optometry as a profession?’ I would recommend it hands down, every time,” Shaishav emphasised.

“Hand on heart, I have no regrets at all. I love what I have done,” he said.