“We were told to take him straight to the hospital”

Director and optometrist at Eyetech Opticians, Adrian Springett (pictured), and mother of nine-year-old Fletcher (pictured), Miranda Earley, discuss how a routine sight test led to the detection of a brain tumour 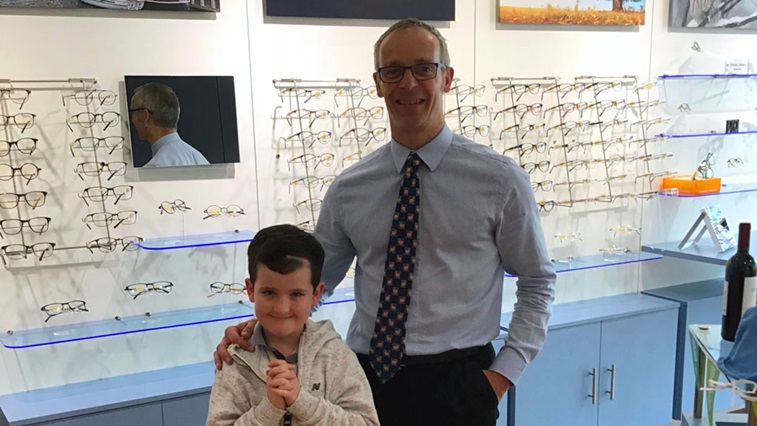 Before you took Fletcher for a sight test, had he experienced any symptoms?

Miranda Earley (ME): Fletcher, who was nine years old at the time, had been getting headaches. There was no set pattern to the frequency of the headaches but at times the intensity of them caused him to vomit. We thought they were possibly migraines. Fletcher had regularly seen an optician where we used to live in Heathrow and had been told that his eye sight was perfect. We were sent an email reminder and this prompted me to book a sight test at Eyetech Opticians near our new home in Somerset.

What did the optometrist find and how did they explain the next steps to you?

ME: Adrian [Springett] confirmed that Fletcher’s vision was great, but because I had mentioned the headaches he decided to look at the back of Fletcher’s eye with a camera. He explained that he could see some redness around the optic nerve discs, which indicated inflammation. He advised me to book an appointment with our GP and told me that he would fax across the images with a referral to the GP. He didn’t alarm Fletcher or myself, but his explanation indicated that it was important that we got things checked out further.

ME: I was naturally concerned, but until we saw the GP the following day I didn’t quite realise how serious things could be. The GP explained that Fletcher had papilloedema and called Musgrove Park Hospital for advice while we were in the room. We were told to take him straight to the hospital and that the team would be expecting us.

He explained that he could see some redness around the optic nerve discs, which indicated inflammation

Did Fletcher have to undergo further treatment and what has been the outcome?

ME: Fletcher had an MRI scan at Musgrove Park Hospital, which found that he had a brain tumour and hydrocephalus that had been caused by the tumour blocking one of the ventricles. Fletcher was transferred to Bristol Children’s Hospital shortly after where he underwent two major operations on his brain. The first operation involved a camera being inserted through the middle of his brain, which made a hole to allow the fluid to circulate to relieve the pressure build up. The second was a full tumour resection.

The neurosurgeons worked on Fletcher’s brain for a number of hours to ensure that all of the tumour was removed. They were incredible. We had to wait a number of days until the biopsy results came back and found out the nature of the tumour. Thankfully, Fletcher’s tumour was benign. Fletcher spent a further few weeks in hospital recovering from the surgery and on returning home the recovery process continued further. He went back to school part time initially and in September 2018 he returned full time.

ME: I could never have imagined that a sight test could have led to the detection of something like this. I would urge every parent to take their children for regular sight tests. Your child’s eyes are so important. If Fletcher hadn’t seen Adrian for his routine sight test, who knows how different things could have been? We certainly will be making sure that our whole family goes regularly.

ME: It has made us realise how important it is to appreciate life, you never know when things could change. Life is the most precious gift, and it should be treasured.

Adrian Springett (AS): The family had just moved to the area and they’d had a sight test reminder from their previous optician. Fletcher had been having headaches, but he’d just started a new school and moved to the area, so I thought it was stress-related. His visual acuity was 6/6 for the right and left eye, which confirmed my initial thoughts. When I did ophthalmoscopy, I immediately noticed swollen optic disc heads. That’s indicative of a possible brain tumour, so I knew that a referral was necessary.

AS: I’d taken digital photos, which I showed to Miranda. When I take images with any of my patients, I sit down and explain everything with them, even if it’s all normal and is just an anatomy lesson. In Fletcher’s case, I pointed at the optic disc and said it looked a bit blurred and swollen. I told Miranda that I thought it might be linked to his headaches and that we needed to get it looked at promptly. I contacted the doctor and expressed my concerns. Then everything happened fairly quickly after that.

I contacted the doctor and expressed my concerns. Then everything happened fairly quickly after that

AS: I’ve had some communication with Miranda. The doctors were amazed that his intracranial pressure was so high, yet Fletcher appeared very well in himself. Fletcher is currently under the hospital eye service, but Miranda told me that she’ll be bringing him in for a sight test again soon. I understand that Fletcher has been doing well and is back at school full time. I look forward to seeing him for his next sight test.

What is your top tip to other practitioners when making a referral?

AS: You have to be very careful with your selection of words. Although optometrists deal with eye conditions every day and things might be routine to us, the person receiving the information can take the information quite seriously. Even the word cataract can sound very serious if you don’t take the time to explain a bit about it, or the context and any severity associated with it. You don’t want your patient leaving your consulting room agitated and concerned because of a lack of information.