How US students stopped retailer from renaming their optometry school

Third-year optometry student, Corey Forbes, made more than 200 black arm bands in protest against the name change. He tells OT  his story 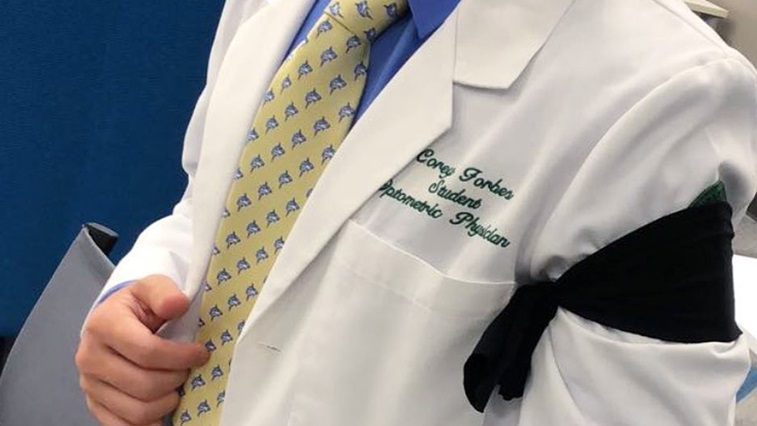 One day in September last year, Corey Forbes made a call to his parents sitting in their home next to a peanut field in Murfreesboro, North Carolina (population: 2963).

When he told his parents about plans to lead a protest against one of the largest optical retail companies in the US, their response was less than enthusiastic.

“They thought I was jeopardising my education and risking my career,” he said.

Explaining his motivation behind protesting the name change, Mr Forbes highlighted that there was a lack of consultation with the College of Optometry.

“I was fighting for the school and the people in it,” he shared.

There were concerns that National Vision would gain more control of placements within the optometry programme as a result of the donation and the clinical nature of the course could become limited.

“A lot of people did not want to go to a university with outside influence,” he said.

Mr Forbes made and distributed more than 200 black arm bands to students that covered the name of the college on their white coats.

You can do more than just check eyes for the profession, you can actually fight to make it evolve

The protest gained momentum, with students at optometry schools in New York and Pennsylvania reaching out to support the protesters.

An alumnus of the NSU College of Optometry made black ribbons that were given out to former students so they could express their solidarity in opposition to the name change.

“I didn’t expect it to get as big as it did. There was even a wedding in Vegas that people were even wearing the black ribbons at. They were putting the ribbons on the diplomas in their office,” Mr Forbes said.

Prospective students began withdrawing from interviews over the name change and the College’s accreditation came into question after donors withdrew a substantial amount of funding in protest.

In October, National Vision and the NSU College of Optometry announced that the donation would be withdrawn and the name change would no longer happen.

“That was a great day,” Mr Forbes said.

“If I had a takeaway from the experience it is that you can do more than just check eyes for the profession, you can actually fight to make it evolve,” he shared.

Although he was initially worried about being punished by the school or losing career opportunities, Mr Forbes said that people supporting the protest had offered him work after he qualified.

Mr Forbes’ parents also came around to the idea of the protest.

“Once they saw how much support I had they were really proud of what I did,” he shared.

“It was a little bit of a rash idea looking back at it but it worked. I have no regrets. I would do everything again,” Mr Forbes said.

He emphasised the contribution of Fort Lauderdale optometrist Dr Brandon Cornish, who helped to organise alumni support, and the other students involved in the campaign to overturn the name change.

“I had a lot of help and would not have been able to do all this without them,” Mr Forbes highlighted.