AK and me: Ruth Dale 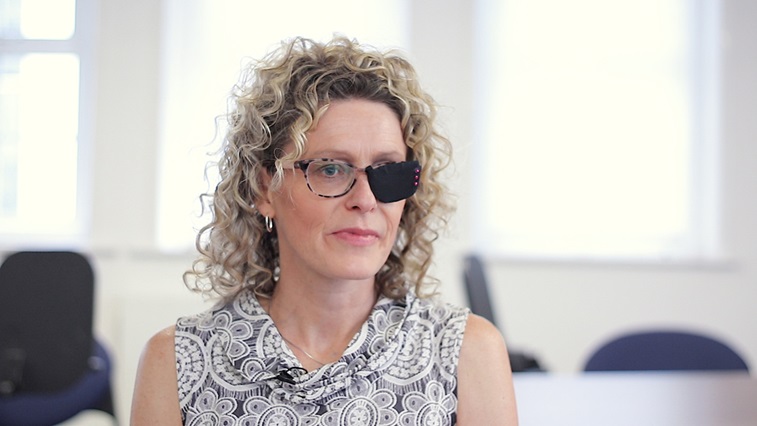 Ruth Dale traces the beginning of months spent in a room padded with blankets and duvets to a seemingly innocuous fleck of mud.

The 47-year-old event manager was re-turfing the back garden of her Aylesbury home when a small piece of mud flew into her left eye.

She immediately went inside to clean her contact lenses before reinserting them.

Within 24-hours her eye had become painful and red. Following a series of tests and an initial misdiagnosis, Ms Dale was told that she had Acanthamoeba keratitis.

The condition meant that she was unable to work for 10 months. Severe light sensitivity resulted in Ms Dale only leaving the house for medical appointments for six months.

“My husband and I lived in darkness at home. We put blankets and duvets up on the windows to stop any chink of light coming through,” she told OT.

Ms Dale’s case is one of an increasing number of Acanthamoeba keratitis cases within the UK.

OT speaks to Ruth Dale about her experience of Acanthamoeba keratitis

A three-fold increase in the infection in the South East of England since 2011 was described by Moorfields clinicians as an “outbreak” in the British Journal of Ophthalmology.

Fight for Sight has highlighted a lack of awareness among contact lens wearers around the importance of good contact lens hygiene.

My husband and I lived in darkness at home. We put blankets and duvets up on the windows to stop any chink of light coming through

Despite having lost sight in her left eye, Ms Dale shared that she is back at work again and able to do many of the things she was able to before the infection.

“I have had very dark times but I have tried to stay as positive as I can. I have got on with my life,” she said.

“Don’t break them. You just never know, you could be unlucky and [Acanthamoeba keratitis] is not a nice condition to have,” she said.

“Although the infection is rare, the micro-organism that causes it is found in water and soil so reducing your chances of coming into contact with it by keeping contact lenses clean, is a must. For example, contact lens wearers should never use tap water to clean their lenses or shower, swim or bath in them. The manufacturers care instructions should always be followed too,” Ms Kanabar emphasised.

“By taking these steps you are minimising the risk as far as possible,” she added.