Exploring beyond the testing room

It took a punctured tyre in a rural village in Kenya during a family holiday and a chance encounter with a helpful lady in her 50s who had disabling cataracts to make me see the devastation a simple untreated eye condition had left on her family.

Here I was a newly qualified optometrist in the middle of nowhere without a local High Street opticians or a nearby eye hospital to direct her to.

I had heard of similar stories over the years of practitioners travelling to Africa and finding a lot of people that need medical attention. Yet due to a lack of funds, resources and education very little was done. I soon learnt that this issue was not just exclusive to Kenya, rather it spanned throughout many parts of Africa. It had become easy to forget there were areas of dire poverty when you were viewing the beauty of the rugged wilderness from your luxury safari lodge.

By contrast, eye care in the UK is very different. Patients can be referred and treated promptly for eye conditions no matter how major or minor they ware and I began to become disillusioned when it came to the commercial nature of many High Street practices. My daily routine began to lose its shiny new excitement several years after qualification and I found myself on a plane back to Kenya with a mission of helping an ophthalmologist and his team on several rural outreach projects.

An opportunity to make a difference

Little did I know that equipment was going to be as basic as attaching testing charts to the trunks of trees and placing pieces of paper on windows to darken the testing rooms. I trained the optical technicians on common procedures such as how to use a slit lamp, a retinoscope and how to dispense reading glasses based on age and lifestyle.

The remarkable lines of villagers queuing for our assistance made it obvious there was a critical issue within these communities. It was overwhelming as we all worked around the clock, separating patients into groups by ocular conditions such as cataracts and glaucoma to more serious tropical eye diseases such as parasitic infections and HIV – something I had never come across in the UK. The queues would continue to build up and many patients were promised operations the next day.

Sadly, a lot of people just lived with their condition seeing no other way. The number of locals who assumed blindness and took early retirement in their late 40s was astounding, when all it took was a pair of ready readers to enhance their lives. I didn’t quite see this picture back in England, nor did I think it was affecting millions.

One patient called Fatima was followed throughout the whole visual journey from her screening to receiving a cataract surgery, which enabled her to continue with her tailoring work and provide for her family. The happiness she experienced was raw and inspiring. 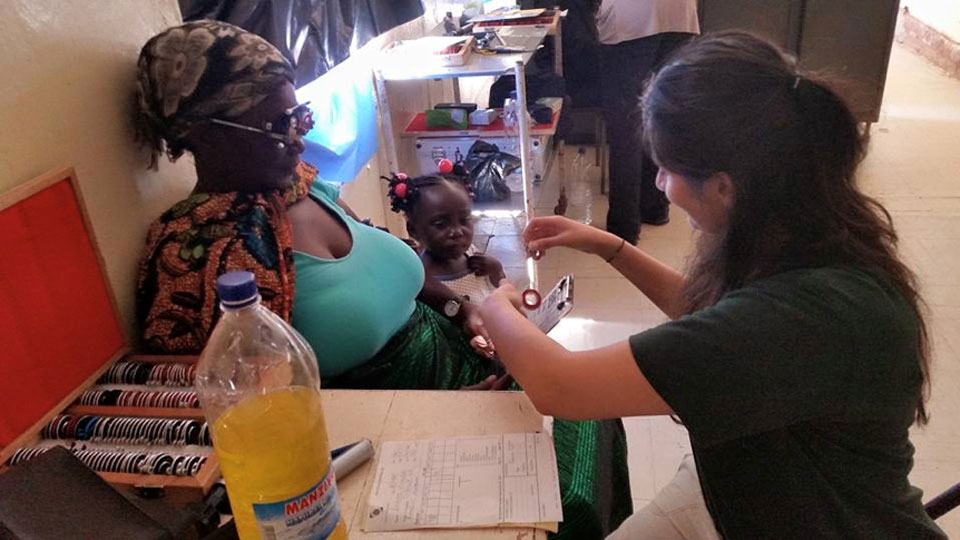 Further work took me to places I’d never knew existed, including an outreach project in Northern Zambia on an island called Kasumalunga. It was an intrepid four-hour boat journey through a crocodile infested swampy lake to be finally greeted by hoards of excited villagers that had never seen any non-local inhabitants let alone health professionals as our boat pulled up onto their muddy shore. My team mates and I got to work in a small straw hut. We dispensed distance glasses to Nasson, a farmer whose appreciation made it obvious to us we’d made a change in his life. We did the same for a fisherman called Gazumbe who simply needed a pair of sunglasses to protect him from the glare.

Exploring beyond my testing room changed my perspective. It encouraged humbleness, gave me a sense of real hands-on awareness and broadened my horizons. Volunteering can be challenging yet can really give you an opportunity to make a difference to someone’s life by putting your skills to good use. Just imagine how you could positively impact communities, socially and economically. You can really capture something unique and memorable for the rest of your life.