"Blind golf has given me a life" 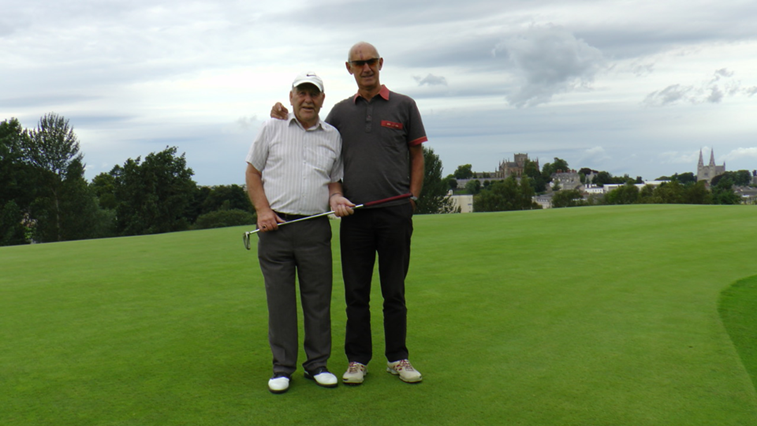 Working on a building site is not the best place as a blind person, I can assure you. I can remember standing with tears in my eyes thinking, “This is terrible – where am I going to go from here? I can’t do this anymore.” I would get out of a van or a car at night and have to be led over the street to get home alright. At that time, I went through deep depression. It was just my wife and myself; we have no children. I went out to the garage and had a cry to myself from time to time.

I belonged to two golf clubs and had a handicap of 11 before I lost my sight. But afterwards, I went for over a decade without holding a golf club in my hands. I started playing again in 1991 after I heard about blind golf at an event in Belfast.

Once I started, I enjoyed everything about it. There is great comradery. I have met more people through blind golf than any other organisation I am involved in. Now I have friends in Scotland, England, Australia and Canada.

In blind golf, you have a guide and they line the club up behind the ball. The first shot down the middle is not a problem, you just hit it as far as you can. After that the guide will tell you the distance and direction and you just hope the shot lands on the green. When you putt, your guide will tell you how many paces away the hole is. It’s the same principle as normal golf apart from the guide lining the club up behind the ball. When we get a good score on a hole, my guide is as delighted as I am. In the same way, when I hit a bad shot, my guide is as disappointed as me.

In Japan, the heat was powerful. It felt like someone was throwing a bucket of water over you

At first, I thought it was quite embarrassing going around the likes of the Ballymena club with a guide. But after the first one or two rounds of golf, it wasn’t too bad. It is something that you can do even if you haven’t played golf before. There are two people who I know in England and Scotland who never played golf until they lost their sight. They are very good golfers – one of them won a British Open.

I have never won a major but I have come second in Japan on two occasions and second twice in Canada too. Always the bridesmaid, never the bride.

I’ve played golf in all kinds of weather. I don’t like the rain, but I would never stop playing golf if it is a bit wet. In Japan, the heat was powerful. It felt like someone was throwing a bucket of water over you.

Blind golf has given me a life that I never realised that I would have. What I was trying to get through in my book, From the Carry Row to Tokyo, is that there is life after blindness – whether that be through golf, tandem cycling or anything else. Life doesn’t stop when you lose your sight.

Drew Cochrane, 78, began playing blind golf after he lost his sight at the age of 39. His experiences are recounted in the memoir, From the Carry Row to Tokyo (£10, Multimedia Heritage, [email protected]).