“After triage I was fast-tracked for immediate treatment”

Optometrist at Classic Eyes, Craig Wilcox, and the owner of BiB Ophthalmic Instruments, Tim Baker, discuss an unplanned scan that led to a sight saving referral

Had you experienced any symptoms?

Tim Baker (TB): I am the owner of BiB Ophthalmic Instruments, so I was well placed to investigate when I awoke one morning with flashes and floaters in my right eye. I was already aware that sooner or later I would experience a posterior vitreous detachment as I was monitoring it on one of our optical coherence tomography (OCT) units.

TB: That morning I went into the office, fired up the OCT and sure enough the posterior vitreous had peeled away and I picked up floaters in the vitreous. The advice I then received was to check the peripheral retina in case of a retinal tear, although the chances were slight. My eye was then examined on a standard desktop non mydriatic fundus camera using temporal, nasal superior and inferior peripheral settings (fixation), as well as central. Nothing could be seen and I was advised I’d just have to live with floaters and eventually they would dissipate.

Did you seek further advice?

TB: I visited an optometrist, Craig Wilcox, who happened to have an Optos unit – a Daytona I believe. I asked if he could take an image of my right eye. Fixating to my far right- temporally, it picked up a sizeable horse shoe tear in my retina. 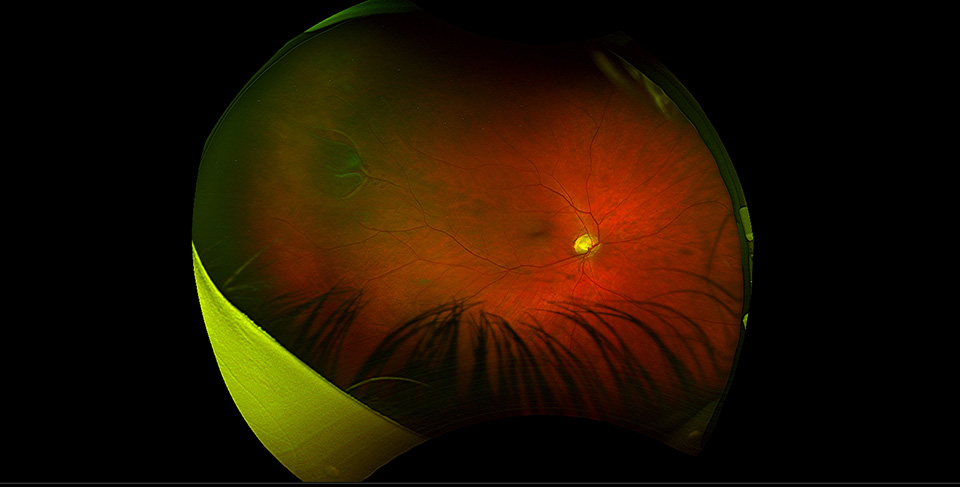 What did your optometrist advise?

TB: He made an immediate referral. After getting over the surprise and shock, the following morning I checked in to my local emergency eye department. After triage I was fast-tracked for immediate treatment, which resulted in photocoagulation to prevent the tear from getting any worse.

TB: If it wasn’t for Optos I probably would never have known about the tear until my retina detached. Optos has undoubtedly increased my chances of a significantly better outcome and possibly even saved my sight for which I’m personally very grateful for.


After getting over the surprise and shock, the following morning I checked in to my local emergency eye department

What did you notice during the eye examination?

Craig Wilcox (CW): Tim didn’t come into the practice for a sight test, he came to deliver an instrument. He told me that he had experienced some flickering and flashing. He wasn’t going to bother doing anything about it, but I said: ‘Let’s just have a look.’ We had a look on an Optos device and there was a great big detachment. I’ve known Tim for 20 years, so I didn’t really give him an option to not have the scan.

CW: I told him to go to the nearest emergency unit. I explained that the horseshoe tear would almost certainly detach without further treatment. It was in position where it was in a direct line with the macular and it needed to be repaired before the macular was involved.

How have you been involved since the referral?

CW: I got a message from Tim to say that he had been seen in the morning and the hospital wanted him to go back in the afternoon because there had been significant progression. That’s the last I heard until recently and I understand the tear has been well repaired.

What are your top tips for practitioners when referring?

CW: Don’t take anything for granted; investigate every symptom; and have a gin and tonic at the end of the day.